INDIANAPOLIS – From the moment practice began for the 103rdIndianapolis 500, team owner Ricardo Juncos knew the odds were stacked against him.

The longtime Road to Indy Ladder Series team owner who had hopes of becoming a full-time team in the NTT IndyCar Series one day saw his sponsorship hopes for this year’s 500 evaporate. For many teams’ owners, that would be the end of the road for an Indy 500 effort because without sponsorship, there is no money to run the car.

Juncos, however, was determined. He had a car nicknamed the “White Rabbit” because it had zero decals on it.

With 2017 Indy Lights champion Kyle Kaiser back for his second attempt at the Indy 500, the White Rabbit was building up to speed before jumping into the wrong foxhole.

Kaiser crashed the White Rabbit in Turn 3 on Fast Friday. The impact sent the car into a turn on its side before the floor extensions that INDYCAR officials have mandated for the current Dallara chassis, along with two large holes in the floor that serve as air deflectors, brought the car back on its wheels.

The “White Rabbit” was dead and Juncos had to put together a spare car. Parts were brought into the Gasoline Alley garages in the back of a pickup truck as the team began a 48-hour saga to rebuild the car and try to get into the 33-car starting lineup.

The team took the car it had run in the INDYCAR Classic at Circuit of the Americas and repaired it in time to hit the track late in Saturday’s qualifications, just to get a balance for the setup. Kaiser was not fast enough to crack the top 30 that were locked into the Indy 500 starting lineup and would have to make it through the “Last Row Shootout.”

By design, they chose not to participate in the Sunday morning practice session. Instead, they kept working on the car with some crewmembers working as long as 48 hours.

Of the six drivers that had to fight for the final three positions, Kaiser and Juncos were given little hope of making the race. The others included a full-time NTT IndyCar Series star in James Hinchcliffe, who crashed in Saturday’s qualifications but had a car fast enough to make it, a full-time NTT IndyCar Series team with two drivers – Carlin with Max Chilton and Patricio O’Ward, a fast 24-year-old in Sage Karam.

And then there was this McLaren outfit from England with a two-time Formula One World Champion by the name of Fernando Alonso.

It couldn’t have been scripted any more dramatically.

With Alonso on the “Bubble” and Kaiser the last of the six drivers in the “Last Row Shootout” to make an attempt, the spirit of the “White Rabbit” hopped, skipped and jumped its way into the field with a four-lap average of 227.372 mph.

Kaiser and Juncos were in, Alonso and McLaren were out. 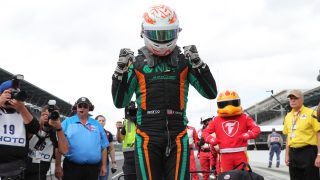 The fans that came out on a rainy cool day at the Indianapolis Motor Speedway roared with delight.

“We didn’t practice Sunday morning because the car was not ready,” Juncos said.

“We went everybody home to sleep at 4 a.m. or we were going to make mistakes. The rain delay helped us because it gave us more time to work on the car. We found other things that made us go fast.

“Even before this qualifying, for us, this was a victory to be here today. I have won already, regardless of what happens from here.”

Juncos will continue to search for sponsors and believes now that he is in the race, he hopes to find some funding. His goal is to run more IndyCar Series races the rest of the season.

“Our guys are so tired, we don’t even have the energy to think,” Juncos admitted to NBC Sports.com. “The ‘White Rabbit’ was fast because it was our Speedway car, but we were able to take this car and work on it to get it into the race.

“Now, we are in the race and we have to keep moving forward.”

🗣️"This is absolutely the greatest story of my life." Here's the emotional team radio after @KyleKRacing secured a spot in the 2019 #Indy500. #INDYCAR // #ThisIsMay pic.twitter.com/uhBovSJH2V

Kaiser is a 23-year-old from Santa Clara, California. He has a deep understanding of what his accomplishment in “Crossroads of America” means.

“Only Indianapolis will give you these kinds of emotions,” Kaiser told NBC Sports.com “This has been the hardest couple of days of my life trying to keep my head straight and go about business. It took not just me, but the whole team trying to keep that mentality.

“I had one goal in mind; go out there and do another qual like we’ve done,” Kaiser said. “We did it three times Saturday and I wanted to do the same time we did. Even though we didn’t have the speed yesterday, we went out to make sure we had the perfect balance.

“We rolled out with the perfect balance.

“We are starting last in the field, but we are in the field. It shows how tough it is just to get into this race. We went for it. We gave it all we had and that is all we had.” 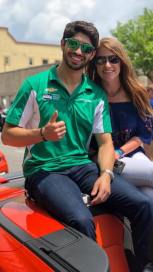 Kaiser’s girlfriend is Liz Van Oostenburg, who works for Harding Steinbrenner Racing in public relations. Sunday was her birthday and she told her boyfriend what she wanted.

“It’s the best birthday present she could have ordered,” Kaiser admitted. “She told me, ‘Just get in the race today.’ I said, ‘I’ll do my best.’”