INDIANAPOLIS – Sage Karam was in a difficult position that he never expected to be in. He was in the “Last Row Shootout” for the 103rd Indianapolis 500 – one of six drivers fighting for the final three positions in the 33-car starting lineup.

Only once in his previous five Indy 500s had Karam started in the last row, and that was when he was a rookie in 2014. In that race, Karam started 31st but raced his way up to a ninth-place finish.

Now, Karam was facing the pressure of pulling off his best four-lap qualification attempt of the month to make the field. Driving for Dreyer & Reinbold Racing, one of the best “Indy 500-only” teams in Gasoline Alley, Karam’s #24 Chevrolet had issues during Saturday’s first round of qualifications.

On a hot, slippery track, the car didn’t perform well enough to make the top 30 that would be locked into the starting lineup. He made five attempts on Saturday and none of them were fast enough.

“I don’t know what’s wrong, I was flat for four laps,” Karam told a group of reporters Saturday. “It just won’t go quicker. It’s just slow; we don’t really know. It’s not that much different from our teammate (JR Hildebrand), who just got it in the show. I don’t know.

“It’s not looking good for us right now.”

Karam knew he had to deliver on Sunday, and he reached back to his days as a champion high school wrestler in Nazareth, Pennsylvania.

Wrestling is the ultimate “martial art.” It is as much mental as it is physical. It’s wrestler vs. wrestler under tremendous strain, and often pain, but it requires being calm and cool enough to know when to make the right move. 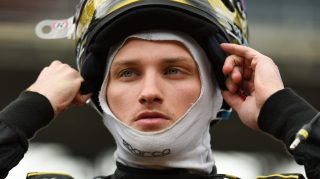 “Let’s just keep it up and get it done on Sunday.”

Karam thought about that as he sat in the inspection line. And he delivered like a champion with the fastest four-lap average in the “Last Row Shootout.” His average speed of 227.740 miles per hour put him in the 31st starting position for Sunday’s race.

After looking into the abyss, he came out the other side. He will look back at this experience as one of his most important moments as a man.

“Absolutely,” the 24-year-old said. “This is one of the most emotional moments I’ve ever had in my life. I’ve worked so hard this month just to be able to talk to you in a happy way. It’s been a roller-coaster month. We’ve had a lot of issues and things we couldn’t control – weather related and other issues.

“I told my team owner, Dennis Reinbold, I wouldn’t let him down. I can’t believe it. I feel like I’ve won the thing and I’ve only qualified for it. That’s what Indy is. Just to race in this race, you are one of only 33 humans that get to take the green flag in this race, and I don’t take it for granted.

“On the first day, we had buffeting issues with the helmet and the car balance wasn’t good. I had a shoulder issue. Just to come back after Saturday, I’m so happy.

“The fans had a crazy roller-coaster ride in this qualifying. Last year’s was good; this year’s, even better. IndyCar is on the right path and I will remember this moment the rest of my life. I will never take this for granted.” 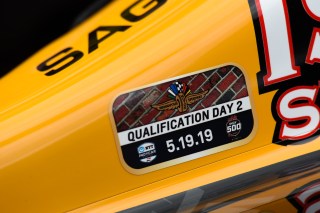 Karam later detailed the sharpest valley and highest rise of that roller-coaster ride.

“I always knew that speed was there, it was just getting it out of it,” Karam explained. “I had a really bad first qual attempt Saturday and skimmed the wall, and I got out and the first thing I said was, ‘We’re fine, we’re fine.’ I genuinely believe that a run like I did just now was going to be like yesterday, I would have been able to bounce back and do that yesterday. But we just kept slightly missing the balance for the weather and ended up having to come back today to fight into the field.

“That was the most stressful 48 hours of my life, probably one of the biggest battles I’ve ever had to go through mentally.”

Karam’s teammate, JR Hildebrand, was able to qualify 21st on Saturday with a four-lap average of 227.908 mph. 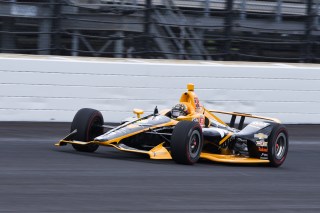 “My teammate did it, and our cars were pretty similar,” Karam said. “We had a really good car for two laps, but we didn’t really have a good car for four, so today we bettered that drop-off, and that was the difference. If we would have fell off even more, who knows then what would have happened.

“But the team rallied, and it’s just been a really, really tough month. To be able to say we qualified when we were kind of backs against the ball there for a while. I’m happy I got in, and in 2014 with this same crew, same car, everything, started 31st and finished ninth as a rookie. If it shapes up like that again, I’ll be quite happy.