Ed Carpenter Racing is stacked with its three drivers starting 2, 3 and 4 including, in order, Ed Carpenter, Spencer Pigot and Ed Jones.

Andretti Autosports is always a contender at the Indy 500 and Alexander Rossi, winner of the 100th Indianapolis 500, leads that brigade with a ninth-place starting position.

No matter where those drivers start in the field of 33, they have to be considered prime contenders to fight it out at the finish of Sunday’s 500-Mile Race.

But who are the “Long Shots?”

There are several prime candidates that fit into that category and one of the best longshots is starting in the middle of the last row.

NBC Sports.com has analyzed the starting lineup and picked these seven drivers as “Long Shots” that could possibly win the 103rdIndianapolis 500.

James Hinchcliffe – Despite starting 32ndin the 33-car starting lineup, Hinchcliffe was a solid pick to make the field on Saturday if he had not crashed in the Turn 2 wall with his primary car in the first round of qualifications. It was unlike 2018 when his car was slow on its original run, had a vibration issue on its second run and the clock ran out with Hinchcliffe still in the qualification line to take the track. 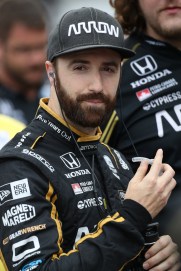 Now that the popular driver from Canada is in the race, the former Indy 500 Pole winner is very capable of driving through the field and making his way into the top five, just as Rossi did in 2018.

Keep an eye on the No. 5 Arrow Honda on Sunday because he’s going to be putting on a show in his charge from the rear of the field.

Ryan Hunter-Reay – The 2014 Indy 500 winner starts 22ndafter struggling to find speed during Saturday’s qualifications. IndyCar’s “Captain America” won the 2014 race starting 19th, so he knows it can be done and he’s just the driver to do it. In the last three Indy 500s, Herta’s DHL Honda has led 81 laps.

Colton Herta – How does a driver starting fifth qualify as a long-shot. Well, he’s only 19 and he is starting his seventh career NTT IndyCar Series race. Herta has a chance to break Troy Ruttman’s record as the youngest Indianapolis 500 winner. Ruttman was just 22 when he won the 1952 Indy 500 after race leader Bill Vukovich crashed with just nine laps to go after leading 150 laps.

Herta is calm, cool and poised, especially for a teenager. A victory by Herta would be huge because he’s already gathering interest from fans in his age group that are the future fans of IndyCar. He already won a race this season when he became the youngest winner in IndyCar history with his victory at Circuit of the Americas. His Harding Steinbrenner Racing Honda is fast and Herta already drives like a savvy veteran. 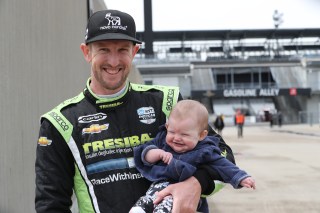 He had an engine issue that dropped him to 25thin 2017, his final year with Ganassi. Last year, driving for the startup Carlin team, he finished 18th.

Kimball’s driving style is perfectly suited for the Indianapolis Motor Speedway because he is always calm and in control. Racing in the Indianapolis 500 is like driving through a severe storm with high winds for 3-1/2 hours, so it takes a steadiness and calmness to succeed.

Conor Daly – Another popular driver with the fans, Daly has struggled in the past in the Indianapolis 500. But this year, he landed what he calls the “ride of a lifetime” at Andretti Autosport. It’s the No. 25 United States Air Force Honda and he has made the most of his opportunity this month. Daly starts 11th, right beside teammate Mark Andretti in 10thand in the row behind of the favorites, Alexander Rossi in ninth.

The three drivers can group together early in the race and advance forward.

Graham Rahal – Stuck in 17thstarting position, Rahal is fully capable of racing to the front from mid-pack. This is actually one of Rahal’s better starting positions in recent years at Indy. He started 30thlast year and 26thin 2016 and 2013. If his Rahal Letterman Lanigan Racing team finds the right setup on Race Day, Rahal could be there at the end to fight it out. He is confident the addition of engineer Allen McDonald can make that happen.

Felix Rosenqvist – Starting way back in 29thpotions, the rookie driver from Sweden has a lot of miles and passes ahead of him to make it to the front of the Indy 500 field. But he is driving a Chip Ganassi Racing Honda and that in itself gives him a fighting chance. 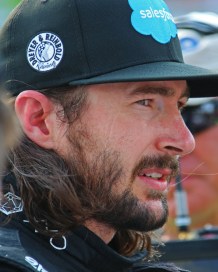 JR Hildebrand – An adjunct professor at Stanford University, Hildebrand was Indy’s ultimate “Heartbreak Kid” in 2011 when he was leading the race, heading to the checkered flag on the final lap and crashed in the Turn 4 wall. The late Dan Wheldon went on to win after Hildebrand’s “Bill Buckner” moment. He’s a much different driver eight years later and a Hildebrand win for Dreyer & Reinbold Racing would be his ultimate redemption.

Jack Harvey – He finished third in the most recent NTT IndyCar Series race two weeks ago in the INDYCAR Grand Prix. His career is on an upward trajectory. Last year, his team made a huge gamble on fuel strategy that could have paid off if there had been one more caution. Harvey was in second place, but running low on fuel, when he had to pit six laps from the finish.

There are many drivers capable of winning the 103rd Indianapolis as this is the closest field from the pole speed to 33rd position in history. This is also a race where that has a few surprises end up in the top 10 and even top five, some of them may not be on this list.

And that’s what makes them “Long Shots.”