INDIANAPOLIS – With all three of its drivers starting in the top four positions of Sunday’s 103rd Indianapolis 500 (11 am ET on NBC), Ed Carpenter Racing is proving to be one of the top Indy 500 teams in the field. The only other team with three drivers in the top 10 is Team Penske, including pole-sitter Simon Pagenaud, sixth-place starter and defending Indy 500 winner Will Power and NTT IndyCar Series points leader Josef Newgarden starting eighth.

Carpenter is the only owner/driver in the series and has already placed his name solidly in the history of the Indianapolis 500 as a three-time Indy 500 Pole Winner. Helio Castroneves has four Indy 500 Poles and Rick Mears is the all-time leader with six poles for the biggest event in racing.

Carpenter narrowly missed his fourth pole position in Sunday’s “Fast Nine Shootout” after completing a four-lap average of 229.889 miles per hour in the No. 20 Chevrolet. Pagenaud knocked him off with four laps that averaged 229.992 mph.

That is just .103 of a mile per hour that kept Carpenter from winning the pole. Broken down into time, it was a margin of just .700-of-a-second.

“That’s the way this series is now,” Carpenter continued. “Everything is just thousandths and hundredths of a second all the way through. The battle that you saw for guys fighting for the 30th spot on Saturday, the ninth spot Saturday and now (Sunday) the strength of this series between the teams and drivers from top to bottom. You’ve got to be perfect to really put it together because if you’re not, everything is so tight you’re going to slide down, and that’s what’s great about being a part of the NTT IndyCar Series is it’s really the best competition in the world.”

Team Penske is celebrating its 50thAnniversary of its first Indianapolis 500 in 1969. Ed Carpenter Racing is in its seventh season.

Carpenter splits the driving duties of the No. 20 Chevrolet with Ed Jones of Dubai, United Arab Emirates. Carpenter drives the ovals and Jones the street and road courses. Another driver on the team, Spencer Pigot, qualified third for the outside of Row 1 with a four-lap average of 229.826 mph. He was the fastest driver in Saturday’s first round of qualifications.

“The strength of the team is what I’m most excited about,” Carpenter said. “To have Ed Carpenter Racing cars starting second, third and fourth I think just speaks volumes to the organization and all our people and effort that they put into building our cars and the consistency of all the equipment is something I’m really personally proud of.

“On Sunday, Spencer was doing a rain dance, I was wanting to run. I really wish one of us would have ended up on pole, but I’m still really happy to be 2, 3 and 4. I think it’s amazing, and Simon just put in a really excellent run with his car, so consistent. I couldn’t believe how consistent it was. So, congrats to him.” 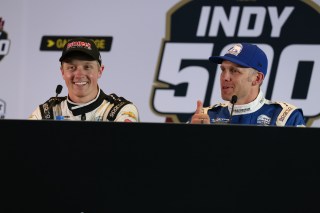 Carpenter has built his race team with a core group of employees. It may be one of the most efficient teams in the series when it comes to resources.

“It really has just been a constant process,” Carpenter told NBC Sports.com. “Derrick Walker helped us kind of lay the foundations for the team that first year, and the key players in the team from Tim Broyles, Matt Barnes, Brett Schmidt, many others that have been there with us from the very beginning. I should throw in Colleen (Dallenbach-Howerton) as well.

“We’ve been able to add quality people, and I think we’ve established a good culture and have a group that likes working together and is committed to the same thing. And we’ve had a great partner in Chevrolet, which also helps, and we just try to get better every year.”

Carpenter has been very competitive in the Indianapolis 500, but despite his three starts from the pole, he has never won the race. He came close last year when he led the most laps in the race with 65 but finished second to race-winner Power.

“I try not to look back too much other than to learn from mistakes and figure out how to do things better,” Carpenter said. “I’m really just looking forward and trying to make the best decisions we can and prepare the best we can. I think that’s the important thing, in how you get better, if you just reflect on all your misses and get discouraged by that, it’s probably not the best mindset.

“We’ve got a lot of great experience and we’ve been getting closer and better, and hopefully, we’ll be able to put it together on Sunday for one of our cars.”

When Carpenter was a youngster, the Indianapolis Motor Speedway was his playground. His mother, Laura, is married to IMS Chairman of the Board, Tony George, whose family owns the Speedway and INDYCAR.

Carpenter began his racing career in the United States Auto Club and earned his way into the series through Indy Lights. He was an Indy 500 rookie in 2004 when he drove for team owner Eddie Cheever and will make his 16thIndy 500 start on Sunday. 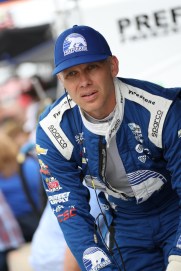 On the track, Carpenter is a three-time NTT IndyCar Series race winner.

The race he really covets is the Indy 500, but he will already go down in history as one of the greatest Indy 500 qualifying drivers in the history of the Indianapolis 500.

“I’ll let you all decide that,” the modest Carpenter said. “I’m proud of the effort and the consistency we’ve had. I’m really maintaining focus on figuring out a way to win this race. That’s the most important thing to me.

“One of the blessings of qualifying well here is we get a good starting spot. The negative is people ask me all the time, ‘Hey, are you going to win the pole again this year?’ And it’s like, ‘Well, that would be nice, but I really want to win the race.’

“I don’t want people to think all I come to do here is qualify because that’s definitely not the focus. And that’s why I’m so proud of the team because I really think that obviously we have to go out and do a good job and put in four good laps, but the speed comes from the work the team does and the preparation, especially to have all of our cars so close.

“That’s for them, and hopefully, the race will be for one of us.”