INDIANAPOLIS – There has always been a celebrity lure to the Indianapolis 500, dating back for much of its history.

The great Clark Gable was one of the first of the major celebrities that came to the Indianapolis 500 in 1947. But when he returned in 1950, he was the lead performer in the film, “To Please a Lady” that featured him as a daring driver in the 500-Mile Race.

The film also featured Barbara Stanwyck as his love interest. When the movie was put into international syndication, the name of the film was changed to “Indianapolis” and a young boy in a displaced persons camp after World War, II saw the film as a 10-year-old. 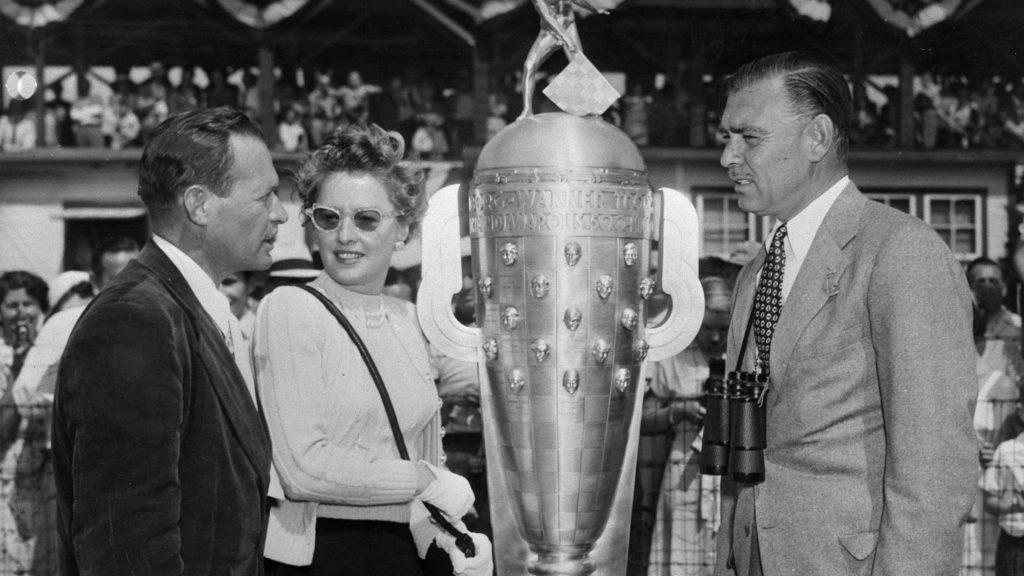 His name was Mario Andretti.

Fast forward to 1965, and Andretti was a guest on NBC’s “The Tonight Show Starring Johnny Carson.” Andretti had won the United States Auto Club (USAC) National Championship, but Carson introduced him as the 1965 Indianapolis 500 “Rookie of the Year.”

“That bugged me because I had just won the National Championship, and all Johnny Carson wanted to talk to me about was winning the Indianapolis 500 Rookie of the Year Award,” Andretti told NBC Sports.com. “But that just shows the Indianapolis 500 is bigger than anything.”

Speed ahead two years and Johnny Carson is at the Indianapolis Motor Speedway, getting ready to take a few laps in Andy Granatelli’s famed STP “Turbine.” Instead of an internal combustion engine, this car was powered by a Pratt and Whitney turbine-powered jet engine. It was driven by 1963 Indianapolis 500 winner Parnelli Jones.

When NBC Sports.com had a chance to visit with Jones at his Torrance, California office the day after the Acura Grand Prix of Long Beach this past April, he was asked about that celebrity encounter with Carson.

“Well, it was a bigger deal for him than it was for me,” the 85-year-old racing legend said. “I took him around in the Pace Car before letting him get into the car and told him he needed to be careful going into the turns. Carson got on the throttle and we about wrecked the car.

“I think he realized at that point he needed to listen to me.” 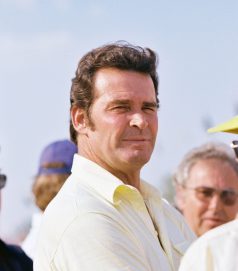 The warm and friendly Garner was television’s “Maverick” and later “James Rockford” on NBC’s hit, “The Rockford Files.” He was always willing to share a tale or two in the old Pennzoil Room, across the way from the old Media Center at the Indianapolis Motor Speedway.

The Pennzoil Room was open to media members and other racing VIPs with a refrigerator stocked with cold cuts, condiments, beer and soft drinks. It wasn’t unusual back then to eat a bologna sandwich with Garner while Indy cars were on the track for practice.

In the mid-1960s, Gilligan and “The Skipper” from Gilligan’s Island were guests of the Speedway, more specifically actors Bob Denver and Alan Hale, Jr.

NASA’s “Star Voyagers” were also frequent guests at the Indianapolis 500, including John Glenn, the first American to orbit the Earth in 1962.

In 1971, he was riding in the back of the Pace Car driven by local Indianapolis Dodge dealer Eldon Palmer. When Palmer hit pit lane to send the field on its flying start, he badly overshot his braking points, lost control and crashed into a photographer’s stand.

The stand collapsed in a massive heap, severely injuring several photographers. Glenn was also slightly injured but couldn’t help think of the irony of becoming the third American to be shot into space on top of a rocket, only to come close to meeting his fate in the back of a Pace Car at the Indianapolis 500.

It only increased the lure for other celebrities to be part of the action. Paul Newman filmed “Winning” at the Indianapolis Motor Speedway in 1968 with the film debuting on NBC in 1969.

Newman got the racing bug from making that film and became a sports car race driver after that and later an IndyCar team owner along with Carl Haas at Newman-Haas Racing.

To complete the celebrity cycle, Newman-Haas’ driver was Mario Andretti, who saw Clark Gable in the aforementioned film as a 10-year-old.

There would be other celebrities, from Indiana-born singer-comedian Phil Harris, to Jack Benny. From Gary Cooper and Jimmy Stewart to Dean Martin and Jerry Lewis. Roy Rogers stopped by and in later years, Aerosmith’s lead singer Steven Tyler badly botched the singing of the National Anthem, sending old-timers in the crowd for the 2001 Indianapolis 500 booing.

“Tony Hulman would be turning over in his grave if he heard that crap,” said a fan sitting next to me that year as I snuck a seat in the grandstands to experience the start of the race instead of from the antiseptic and isolated Media Center. 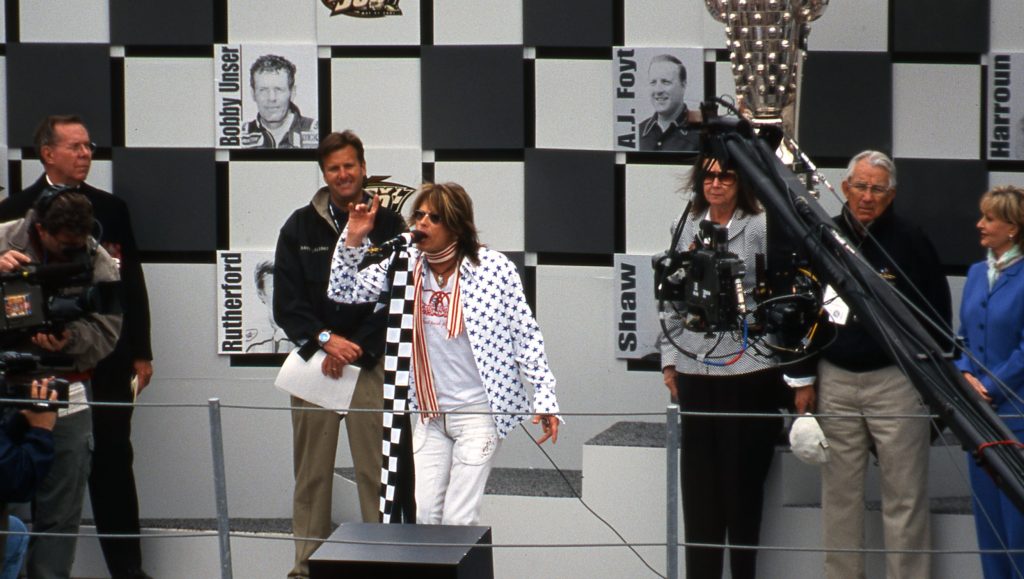 And of course, the late Jim Nabors frequently sang “Back Home Again in Indiana” from 1972 to 2014, although not every year.

Until the 1977 when Janet Guthrie became the first female race driver to make the 33-driver starting lineup for the race, the Indianapolis 500 was considered a “Man’s Game.” It was the greatest spectacle in testosterone as well as speed.

Since Guthrie competed in the 1977 and 1978 Indianapolis 500, there have been many female drivers that have followed in her path, most notably NBC’s own Danica Patrick. She nearly won the 2005 Indianapolis 500 as a rookie and was in the lead with seven laps to go before she was passed by eventual winner Dan Wheldon. Patrick would finish fourth.

Two years later, the great NFL quarterback Peyton Manning waved the green flag to start the race just a few months after he led the hometown Indianapolis Colts to victory in Super Bowl XLI over the Chicago Bears.

And this year, NBC “Symphony” will bring some of its biggest names to Sunday’s 103rd Indianapolis 500 and the days leading up to Race Day.

NBCUniversal programs such as TODAY, NBC Nightly News, and Golf Channel’s Morning Drive, among others, are celebrating the 103rd “Greatest Spectacle in Racing” with related promotion and editorial content leading up to Sunday’s big event.

Following is a summary of NBCU’s comprehensive efforts throughout the Month of May and this week leading into Sunday’s Indy 500 on NBC:

Mario Andretti on NBC Nightly News – This Saturday, May 25, the night before the Indy 500 on NBC, Nightly News will profile 1969 Indy 500 winner Mario Andretti as he looks back at the 50th anniversary of his victory in Indianapolis. The segment will feature interviews by Nightly News correspondent Anne Thompson with both Andretti and lead Indy 500 play-by-play voice Leigh Diffey at Indianapolis Motor Speedway, as well as portions of Drive Like Andretti, NBC Sports’ documentary profiling Andretti’s journey from war refugee and immigrant to racing legend and cultural icon.

Indy 500 on Morning Drive – IndyCar and Golf Channel will be shooting and producing content this week with Golf Channel’s personalities being chauffeured in an IndyCar to Colonial Country Club in Dallas, Texas, for the Charles Schwab Challenge on Golf Channel. Morning Drive will air the content on Friday leading up to the event.

NBC Celebrities at Indy 500 – Kelly Clarkson (The Voice and The Kelly Clarkson Show) will sing the National Anthem at the Indianapolis 500, Chevel Shepherd (Season 15 Winner of The Voice, on Clarkson’s team) will be singing God Bless America, and Matt Iseman and Akbar Gbaja-Biamila(American Ninja Warrior) will serve as the Indy 500 Grand Marshals. Numerous NBCU programs and social accounts will promote these honorary positions.

NBC News Channel Interviews – NBC News Channel will collect numerous interviews with Indy 500 drivers and NBC Sports commentators this week leading up to the race to service NBC’s 200-plus affiliates.

Mario Andretti & Family on TODAY & The Tonight Show Starring Jimmy Fallon – Ahead of the Indy 500, Mario Andretti, son and current team owner Michael Andretti, and grandson and current IndyCar driver Marco Andretti appeared on TODAY and The Tonight Show Starring Jimmy Fallon to reveal the car that Marco will be driving in this year’s Indy 500 and discuss the Greatest Spectacle in Racing.

Drive Like Andretti Free Screening – NBC Sports will host a second free screening of Drive Like Andretti at Newfields in Indianapolis this Friday evening, May 24, ahead of the Indy 500 on Sunday. Click here to reserve your free tickets.

Bad Actors. Great Drivers. – NBC Sports shot and produced content with INDYCAR drivers comically reciting lines from some of NBCUniversal’s most iconic shows (i.e. NBC’s This Is Us, Chicago Fire, The Office; Bravo’s Real Housewives of New York, Vanderpump Rules; Universal Pictures’ Jaws, Back to the Future; E!’s Keeping Up with the Kardashians; USA’s Chrisley Knows Best). This content will be shared on the different NBCU shows and network social accounts this week leading up to the Indy 500.

NBCU Social Stunt – Shows and networks across NBCUniversal will bombard their respective social media accounts with Indy 500 content on Sunday morning prior to the race.

Grammy Award-winning band Kool & the Gang and Foreigner, known for their 1984 hit single “I Want to Know What Love Is,” will headline the Miller Lite Carb Day Concert at Indianapolis Motor Speedway. The bands will perform inside Turn 4 at the track during the annual show set on the Friday before the Indy 500.

To start the race day off, DJ/producers Skrillex, Alesso, Illenium and Chris Lake will perform at the Indy 500 Snake Pit at the Turn 3 infield.

Kelly Clarkson, a three-time Grammy Award winning artist, will return to sing “The Star-Spangled Banner” for a third time before the start of the race.

Academy Award-winning actors Matt Damon and Christian Bale will serve as honorary starters at this year’s Indy 500. Damon and Bale, stars of the upcoming James Mangold-directed film “Ford v. Ferrari,” will kick off the Indy 500 racing festivities by waving the green flag. In the movie, scheduled to be released November 15, Damon portrays Carroll Shelby while Bale plays Ken Miles as the two team up to take on Enzo Ferrari at the 1966 24 Hours of Le Mans.

The lure of celebrity is one of the major reasons the Indianapolis 500 stands above all in terms of sporting events around the world. They all come to witness the ultimate in speed and bravery with the greatest celebrities of all:

The 33 drivers in the starting lineup.