INDIANAPOLIS – From Mark Donohue in 1969 to today’s lineup of Will Power, Helio Castroneves, Josef Newgarden, Simon Pagenaud and every driver in between, Team Penske’s 50thAnniversary at the Indianapolis 500 is a tremendous achievement to celebrate.

When Penske Racing entered its first Indianapolis 500 in 1969, they stood out to the grease-stained and grizzled USAC crowd that inhabited Gasoline Alley at the Indianapolis Motor Speedway. They were the “College Boys with crew cuts, starched shirts and polished wheels” as team owner Roger Penske recalled.

The team’s arrival transformed the culture of the Indianapolis 500. Penske brought innovation, sponsorship, engineering and a “business-to-business” background that increased the professionalism of the sport and the event. Instead of the days of “run what you brung” on a trailer being hauled to the Speedway behind a station wagon, Penske Racing were the first to have a team transporter, affectionately known as the “Blue Hilton” because it had a sleeper cab up front.

“The key thing is we have brought certain sophistication to the sport,” Penske told NBC Sports.com last week at the Indianapolis Motor Speedway. “We did that in CAN-Am with Porsche and certainly in Trans-Am. We had a commitment to our sponsors so when we came to the Speedway, we wanted to represent them properly. You didn’t bring a company like Sun Oil Company without showing their brands and their colors and that is what we did.

“That was an evolution. The equipment, the people, the discipline.

“It’s ironic that 50 years later, we will have 500 to 600 years of experience in our pits during this race.

“The sport has grown and the Indianapolis 500 has also grown over the last 50 years.” 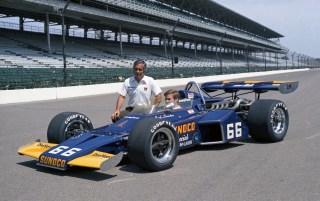 “Thirty-eight percent of the times we have entered this race, we have won,” Penske said proudly. “We’ve had 18 poles, 17 wins and have won 17 Pit Stop contests.

“More important, the stat that gets me the most is we have led over 11 total races – 2300-plus laps. That shows me the drivers that we’ve had and the execution by our team.”

Penske Racing has enjoyed success, more than failure. But one of its most epic failures occurred in 1995 when neither of the team’s two drivers – defending Indy 500 winner Al Unser, Jr. or two-time Indy winner Emerson Fittipaldi failed to make the 33-car starting lineup.

That came just one year after the famed Mercedes-Benz 209 cubic-inch pushrod engine, known as “The Beast,” dominated the 1994 Indianapolis 500.

It began a long departure for the team. In 1996, Penske remained loyal to CART as its teams boycotted the Indianapolis 500 over the creation of the Indy Racing League.

It was the first time Team Penske went 1-2 in the Indy 500 with a young Castroneves winning the race ahead of then-teammate and two-time CART champion Gil de Ferran.

“Probably one of the biggest mistakes I’ve ever made in racing was leaving the Indianapolis Motor Speedway for a few years,” Penske said. “Racers have hard heads and I guess I had a pretty hard one on those days.

“We came back and won the race three years in a row and have never looked back. This race is special and you need to be here to win.”

Donohue got Penske Racing its first Indianapolis 500 win in 1972. After that, he had to wait until Rick Mears won the 1979 Indy 500 before he could celebrate a second win at Indy.

Fittipaldi won his second Indianapolis 500 in 1993 driving for Penske, followed by Unser’s win in “The Beast” in 1994. 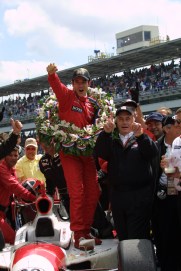 Juan Pablo Montoya returned Team Penske to Victory Lane in 2015 and Power got his first Indy 500 win, and the team’s 17th, last year.

“When you go back to 1979, we had our own car and it had a Cosworth engine and it was similar to Formula One,” Penske told NBC Sports.com. “From that point on, with Nigel Bennett, we had a wind tunnel and those assets helped us. Now, everybody has the same pieces and that has helped a lot of people because it has kept the costs down.”

Ask Penske which is his favorite win, and he really can’t pick one.

“The first win and the last one, I guess are my two favorite,” Penske quipped. “Maybe when you think about 1985 when Danny Sullivan spun and won that race, that’s one. And, winning with the Mercedes-Benz engine in 1994. Or, getting Sam Hornish, Jr. that win in 2006, that one stands out.

“But, it’s really hard to pick just one as my favorite.”

When asked if the team was going to throw a 50thAnniversary Celebration for the team, Penske answered like a true racer.

“I think we’ve had enough celebrations for this year,” he said. “What I want to do is celebrate and 18thIndianapolis 500 if I can.”