INDIANAPOLIS – Scott Dixon normally starts up front in the Indianapolis 500. He has started on the pole three times, including 2008 when he scored his only Indy 500 win.

THE 103RD INDIANAPOLIS 500: Click here for how to watch

This year has been a different story for the five-time NTT IndyCar Series champion. He starts 18thin Sunday’s 103rdIndianapolis 500, the worst of his career in the 500-Mile Race.

“We have been very average,” Dixon said.

He also experienced a mechanical problem on his No. 9 PNC Bank Honda for Chip Ganassi Racing in Friday’s final day of practice on Carb Day.

Dixon told NBC Sports Saturday morning at the Indianapolis Motor Speedway the team found the mechanical issue and said it was a “mistake” on the setup. Dixon won’t get a chance to test the new setup until the green flag drops to start Sunday’s Indy 500 at 12:45 p.m. Eastern Time.

“Hopefully, we can fix it and have a much better day on Sunday,” Dixon told NBC Sports.com. “We were horrible. We think something mechanical was really off with the car. All in all, it was a pretty rough practice.

“The cars were freshly put together and sometimes when you put a fresh car together, you put something on their wrong. We’ll just have to wait and see what happens. Race Day looks like it is going to be cooler. Here, it’s more of a mental game.”

Dixon is starting his 17thIndianapolis 500 on the outside of Row 6. It gives him a different approach to the start of the race, than if he were starting further up front.

“You need to move up as quick as possible,” Dixon said. “The only concern is the risk it puts you in is at the start of the race. You really don’t want to be in an altercation at the start. Speed-wise, I think we can move forward as quickly as possible.

“Track temperature is the culprit right now. With the new surface that has been laid down, it attracts the heat. That is what we fight the most now because it affects the tire the most. I think it’s better for racing because you get a better reading of a good car winning, rather than all the cars running equal.”

Dixon believes his experience can help with the process, but he also believes a newcomer can bring a fresh attitude because they don’t know what to expect.

Race week is the most difficult for a driver in the Indy 500 field because they have a full week to talk about what they think they are going to do in the race.

Monday’s 2-1/2-hour practice session came in cool conditions with a high of 60. Friday’s “Carb Day” practice was near 90 degrees with high humidity. 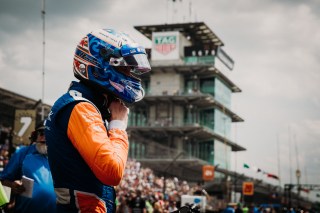 “Our cars on hot days have been pretty good,” Dixon said. “The heat always magnifies bad things. The good cars are going to be better. Until we get to race day, you never really know.”

Dixon believes the winner needs to have a clean day. If that driver makes a mistake, it has to happen early in the race, so they have time to recover over 200 laps of hard racing.

It’s a team sport and with seven to nine pit stops, the team has to be on top of its game during the crucial time to refuel the car and put on new tires.

It’s all about execution.

“It’s impossible to get everything right in a 3-1/2-hour race, but that is what sets the winner apart in this race,” Dixon said. “We have a bigger window of changes to the car from last year, but it’s not giant.

“The good teams typically execute better. That doesn’t guarantee you anything, either.

“You need to find that ‘Golden Ticket’ you think is going to help you.”

Mario Andretti has been honored all month for the 50thAnniversary of his only Indianapolis 500 win in 1969. Andretti won four IndyCar Series championships and 52 races in his career.

In many ways, a good comparison could be made between those two drivers because both should have won the Indy 500 more times than once.

“I’ve stepped on my own feet a couple of times to make that worse. We have strategy-wise, too. There were a few we had a pretty clear run on it but didn’t get it done.

“I feel pretty fortunate we have won here once. It’s the same goal for everybody. We are here to try to win, unfortunately there are 32 others that want the same thing.

“It would be fine if it were just the 9 car running on Sunday, but that’s not the case.”