INDIANAPOLIS – One of the happiest drivers after the final practice session for Sunday’s 103rdIndianapolis 500 was Graham Rahal. Although he was 17thon the speed list at 223.664 miles per hour in the No. 15 Honda, Rahal was happy with the way the car performed in traffic.

As fellow-driver Ryan Hunter-Reay pulled up in a golf-cart, Rahal told the Andretti Autosports driver that he had a race car that was “Money.”

THE 103RD INDIANAPOLIS 500: Click here for how to watch

“It was good there at the end,” Rahal said. “I’m always the cautiously optimistic person, but if I tell you it’s good; it’s good. I was able to pass a lot of guys and was up there with the Penske Boys at the end.

“If it stays like that and we get ourselves in position, we have a good chance at this thing. We have a few things to overcome, but it felt good. It felt really good.”

This came after Rahal had a slight brush with the Turn 2 wall when his right-front tire “kissed” the outside wall.

“The car was OK, then it took off with understeer and brushed the wall,” Rahal said. “With the winds like this, it gets gusty. I was behind two or three cars. If you get a crosswind and hit the wake, it’s going to go.

“It was one close call, but after that, the car was really good.

“Maybe we bent something, and it helped the setup. The car felt fine and it drove straight.”

There are plenty of tire marks on the white walls at the Indianapolis Motor Speedway. Rahal has left a few of those with his car in the past, including Friday.

“I felt really good,” Rahal said. “My car was strong. If the car can stay like that, we’re good. The temperatures should be similar. We have the downforce package right. We tried some things we haven’t tried yet.

“I don’t know what happened, but she sure turned on all of a sudden.” 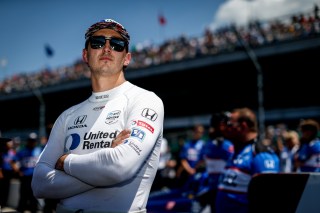 Rahal is also optimistic at his ability to pass in the 500-Mile Race.

“I was able to pass, and I’ll be honest, earlier in the week, I thought no,” Rahal said. “But I was genuinely able to pass. I think we’ll be fine.