It’s when a flash of anger in the heat of battle creates fierce determination. It’s like a burst of horsepower from a turbocharger, but it has to be unleased responsibly.

“A bunch of hungry, angry cars behind me,” Alexander Rossi radioed his crew while in the lead before the final restart Sunday at Indianapolis Motor Speedway. “Do they know I’m angrier?”

Rossi’s “Red Mist” was on full display during a runner-up finish in the 103rdIndianapolis 500. First, he was angered by Helio Castroneves Chevrolet impeding his progress in the race, screaming to his crew on the radio that Castroneves was five laps down.

Then came another botched pit stop by his Andretti Autosport crew when Rossi pitted on Lap 137. The crew could not get the fuel probe engaged into the Rossi’s fuel tank on his No. 27 NAPA Honda. It was the third time in Rossi’s four Indianapolis 500s that an issue in the pits played a role in his outcome.

It worked in his favor as a rookie in the 100thIndianapolis 500 in 2016 when it put him out of sequence to most of the field, and he was able to stretch his last tank of fuel for the final 36 laps.

This year, it took away his strategy of getting superior fuel mileage to his prime competition — the fast, but less fuel efficient Chevrolets at Team Penske and Ed Carpenter Racing. Rossi could go longer on one tank of fuel than any driver other than Scott Dixon, but that advantage was wiped out after the fuel probe issue.

Rossi’s stop was more than 20 seconds long. He sat in his car in pit lane and pounded his fist on the steering wheel, screaming at his pit crew, “Every year!”

Andretti Autosport Chief Operating Officer Rob Edwards, who handled the No. 27’s pit strategy, radioed back to Rossi and told him it was a fuel probe problem.

Rossi radioed, “Is IndyCar going to deal with cars that are five laps down appropriately, or this is a (bleeping) joke.

Castroneves was actually three laps down at the time. Andretti Autosport tried to get Team Penske spotter Rick Rinaman to talk to IndyCar, to have Castroneves move out of the way.

It briefly got worse for Rossi, before it got better. When the yellow flew shortly after his pit problem, he was shuffled from first to fifth and lost a spot on the next restart.

On Lap 152, Rossi was driven all the way to the inside pit wall by Oriol Servia, nearly putting Rossi’s Honda into the wall. Rossi was livid when he came back to pass Servia, who was a lap down, on the outside of the frontstretch one lap later, shaking his fist at the driver from Spain while racing at over 230 mph down.

“This is the biggest joke I’ve ever been a part of,” Rossi radioed to his crew.

Edwards radioed back the team was “trying to work with IndyCar” to move Servia aside.

Rossi was blunt in his reply. “Do a better job.”

His fist-waving could be seen by the massive crowd approaching 300,000 fans from the grandstands of the Indianapolis Motor Speedway. They roared with approval.

“Defending at 200 miles an hour is sickening.”

Once he got by Servia, he passed Sebastien Bourdais for fifth on Lap 157, Conor Daly for fourth on Lap 164, and that would set up the battle for the race win with one pit stop remaining for the contending drivers.

Team Penske’s Simon Pagenaud pitted on Lap 169 with a flawless final stop. Rossi pitted one lap later and was in-and-out after just 9 seconds.

On Lap 178, Rossi passed Pagenaud for the lead. Moments later, there a huge crash in Turn 3 involving Graham Rahal, Bourdais, Charlie Kimball and Zach Veach, and the cleanup brought out the red flag for 18 minutes.

When the green returned, there were just 14 laps left, and Rossi was determined he was going to win. His battle with Pagenaud was epic.

On the Lap 187 restart, Rossi was the leader, and Pagenaud passed him for the lead on the frontstretch.

Rossi returned the favor to regain the lead in Turn 1 on the next lap. One lap later, Pagenaud passed Rossi on the frontstretch.

At this point, Rossi decided to stay as close to Pagenaud’s rear as he could, waiting for the right moment to make what he hoped would be the race-winning pass.

With two laps remaining in the race, Rossi made the pass for the lead in Turn 1. But, he couldn’t build a large enough gap over Pagenaud. On Lap 199, Pagenaud passed Rossi for the win in Turn 3. Next time by was the white flag and the lap after that, Pagenaud took the checkered flag in the Indianapolis 500 for the first time in his career by just 0.2086-of-a-second.

As Pagenaud celebrated the victory to the cheers of the huge crowd, Rossi spoke about his determined battle.

“We had the superior car, we just didn’t have it at the end,” Rossi said. “It’s going to be hard to get over, but it was a great day. There were a lot of lapped cars that wouldn’t move over. Fortunately, it didn’t make a difference in the end result.

“Blocking is disrespectful, but we will take care of that another day.” 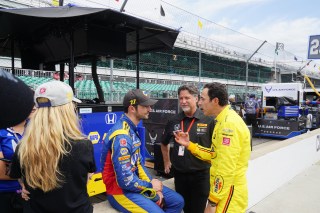 Later, Castroneves went over to discuss his issue on the track when he did not move out of the way.

Castroneves told NBC Sports.com that he was simply trying to “follow orders.” When asked if that meant to get in Rossi’s way, the three-time Indy 500 winner said, “No, no, no. They told me to race hard and that is what I was doing.”

Castroneves tried to explain that to Rossi, who looked at Castroneves and said, “What? You were five laps down.”

In Rossi’s fourth Indy 500s he has finished first, seventh, fourth and second.

After a round of interviews with local affiliates, Rossi had a chance to go into detail with NBC Sports.com.

“I was just trying to get it right, but we didn’t have enough top-end speed,” said Rossi, whose Honda was at a slight horsepower deficit while having superior fuel economy to Pagenaud’s Chevy. “There was a lot of disrespect out there by the drivers who were lapped. It’s disappointing that things happen like that.

“The yellow really helped Simon because he was struggling with mileage and we weren’t. We pitted from a very strong lead and had another fuel pump probe, and that is very frustrating. That’s three out of four years we have had an issue.

“That final yellow flag was what put the nail in the coffin for us. We knew the 22 car (Pagenaud) had superior straight-line speed and there was no defending that on the restart. I went for it with two laps to go and he just drove right back by me.

“It’s all horsepower. I didn’t lift for 15 laps and he drove right by me. When I got by him, it was three corners later, he was passing me again.

“That’s the way it goes. We hung it all out there and we are two-tenths of a second short.”

Team owner Michael Andretti had five cars in the Indianapolis 500 and ended with three cars in the top 10 led by Rossi in second.

He thought Rossi had to overcome some unnecessary issues on the track, including what he thought was blocking on the final lap by the race winner.

“That wasn’t good with Servia,” Andretti told NBC Sports.com “I don’t know what Oriol was thinking. That was disappointing.

“In the end, we didn’t have enough power to by Pagenaud. What Pagenaud did was illegal, but because it’s the last lap of the Indianapolis, I know INDYCAR isn’t going to do anything. He did three moves down the back straightaway. He went down, back, down and back. You aren’t supposed to do that.

“I told Alex he did everything right. We were missing a half-mile an hour there. He drove a heck of a race and has nothing to be ashamed about.

“Now, Roger Penske has another Indy 500 win so it’s going to be harder to catch him,” Andretti said of Penske’s 18thcareer Indy 500 win. “They did a good job. They dominated the month.”

Rossi would like to see one more adjustment of aero grip and one more step of tire grip because it’s still hard to follow another car. 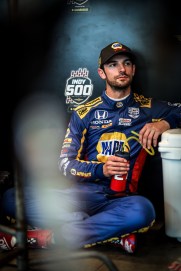 “We had a really superior car to everyone today,” Rossi said. “Nobody was passing like we were. There is nothing more we could have done. It was great execution all day long, just didn’t have enough at the end.

“Simon defended three times on the final lap, but it was for the win in the Indianapolis 500. What do you expect?

“I’m not disappointed with the effort. It doesn’t change the end result, though.

“I’m just here to win, man. I’m here to win races and nothing else is really that important. I hope people get on board with that. If we put on a show and entertain people, that’s good for the IndyCar Series. This is my home now and I’m really, really happy to be here.

“Once you win one Indy 500, the desire increases dramatically. Now, we start thinking about the 104thIndy 500 and try to be even better.”

Rossi admitted he was happy for Pagenaud, who won his first Indianapolis 500. He started on the pole and led 116 laps.

“I’m not unhappy for Simon at all,” Rossi said. “He did an incredible job all month. He has busted his ass and committed himself to the series for so long. He is an exceptionally talented race car driver.

“He’s a great driver and a great guy. He’s going to be taking pictures in his suit and helmet all over the United States now. We’re going to be entertained by that, I’m going to get annoyed by it.

“Hopefully, we take advantage of his lack of energy at Detroit.”