INDIANAPOLIS – After celebrating in Indianapolis Motor Speedway’s Victory Circle with his winning driver, the billionaire industrialist naturally jetted off to Charlotte Motor Speedway to watch another of his race cars.

No, “The Captain” monitored Team Penske’s performance in the Coca-Cola 600 from afar and stayed in Indianapolis to celebrate Simon Pagenaud’s victory, the 18th in the Indianapolis 500 for Team Penske.

The traveling man was John Menard, the namesake founder of the home improvement chain that sponsors Pagenaud’s car and his son Paul’s Ford in the NASCAR Cup Series.

Sunday marked John Menard’s second win as a sponsor at the Brickyard (where Paul won in 2011) but his first in the series where he first planted his company’s flag 40 years ago.

“You ever watch that movie called ‘The Candidate’ when that guy works and works and works and finally gets elected, after the election, he won, and he gazed into the mirror and says, ‘What the hell do I do now?’ That’s the way I feel,” Menard said. “We’ll go try to win another one.”

The Eau Claire, Wisconsin, native recalled dragging a sponsor sign to his first Indy 500 in 1979 and begging an Indianapolis Motor Speedway worker to let Menard through the garage gate without a credential.

“He goes, ‘Where are you going with that sign and I said, ‘I want to get in the garage area,’” Menard said. “So he unlocked the gate and let me in. I didn’t have a credential. I didn’t know where I was going. I said which way is the garage area? I think he thought I was crazy, but we had a good time.”

Over the past four decades, Menard has sponsored cars for IndyCar contenders such as Tony Stewart, Greg Ray and Robby Gordon, and he also owned part-time NASCAR efforts in the Cup (with Gordon) and truck series.

In 2018, he moved his NASCAR sponsorship from Richard Childress Racing to Team Penske and its alliance team, Wood Brothers Racing, after sponsoring Penske’s IndyCar teams for a few years.

“John and I have been around here a long time,” said Penske, who was celebrating his 50th year at Indy in 2019. “I’ve watched him and he watched me and a couple years ago, we said, ‘Look, maybe we’d do better together. Finally it took a couple years, but John, to see the Menards logo and certainly your excitement and commitment to the sport for so many years is terrific, and we could bring home a winner with you and you with our guys. Just tremendous.

“You’ve got a great brand. You’re a great person, your family, and obviously Paul is a key guy on our team down in the south, so we can’t say enough.” 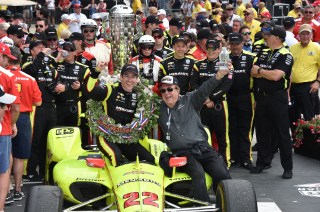 Said Pagenaud, whose No. 22 Dallara-Chevrolet has sported the day-glo colors of Menards since 2017: “John Menard, he’s been trying so hard. I felt so bad that we didn’t get one for him already, so finally getting one for him is very special.

“Having that livery is very cool because people notice the car so easily. It’s so great for all that he’s done for the sport. He’s done so much. He deserves to get a Borg-Warner, so I’m very proud to be the driver.”
Drinking the winner’s milk with Pagenaud, whom he called “just one wonderful human being,” was special for Menard.

But it still might rank behind kissing the bricks at Indy with his son.

“That’s family,” Menard said. “That was probably the highlight of my personal racing career just because it was my son that won. But this ranks right in there. I’ll tell you what, this is a good deal, and I can’t thank Team Penske, I can’t thank the Indianapolis Motor Speedway enough for all the great memories and times and over the years that we’ve had here. It’s amazing.”