INDIANAPOLIS – One of the greatest aspects of the Indianapolis 500 is the pageantry of the event. It’s one of the few sporting events on Earth where the pre-race pageant is worth the price of admission in itself.

Then comes the greatest thrill show in all of sports, the high-speed drama of the Indianapolis 500.

Follow along as NBC Sports.com gives a “Backstage Pass” of some of the sights and sounds we encountered in the moments leading up to the start of the 103rdIndianapolis 500 on Sunday.

Fans come early and many stay well after the race concludes. The biggest reason for that is many of these spectators don’t want to get stuck in huge traffic jams. Getting crowds approaching 300,000 fans in and out of the Indianapolis Motor Speedway is not an easy task.

Rather than sit in traffic for hours, it’s sometimes easier to get up at 4 a.m. and get to the track in time for the 6 a.m. bomb that is exploded signaling the public gates are open.

Yes, it’s an aerial bomb that explodes over the four holes in the golf course that are located in in the Indianapolis Motor Speedway infield.

Upon arrival at the Indianapolis Motor Speedway, it’s still dark as the sun begins to rise, but inside is a bustling city as hundreds and hundreds of workers have been at it all night. From security officials, to vendors tending their booths, to catering staffs and waiters and hostesses, it’s like watching a large city begin its day. 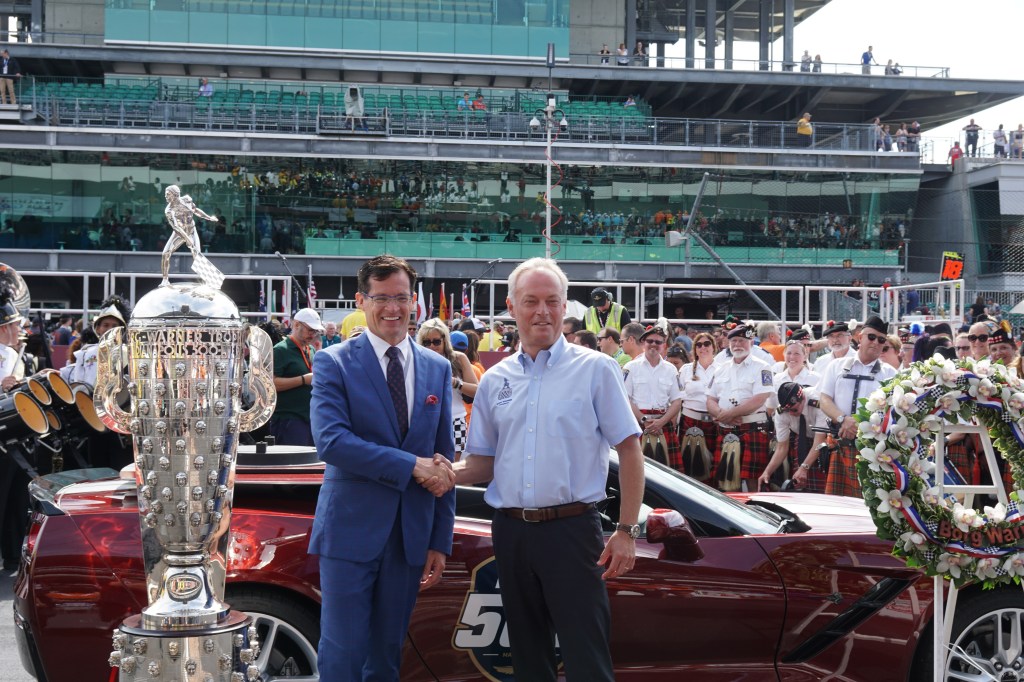 By 7 a.m., there are already lots of spectators in the infield and Brickyard Pavilion portions of the Indianapolis Motor Speedway. Others take their seats early to watch the annual “Cavalcade of Bands” as high school and college marching bands from around the United States get the honor of marching on the same race course where some of the greatest names in racing history have competed.

At 8 a.m., the Borg-Warner Trophy is moved out of the Indianapolis Motor Speedway Museum and loaded onto a special pedestal on a Chevrolet Corvette Pace Car. The Gordon Pipers, a Scottish Bagpipe brigade that has been part of this spectacle at Indianapolis since the 1960s, leads this parade as the Trophy makes its way around to the track.

That’s when it is joined by the Purdue University Marching Band, giving the Borg-Warner Trophy a tremendous fanfare as it slowly comes down the frontstretch and is officially placed at the “Yard of Bricks.” BorgWarner CEO Fred Lissalde and Indianapolis Motor Speedway President Doug Boles pose with the trophy and wreath before it is placed onstage as part of the pre-race ceremonies.

It signals time for the cars to be rolled onto the grid and placed in 11 rows of three. This is done by hand as crew members roll each car out of the pit area and placed in the proper position on the grid.

New to the grid this year, was a large outdoor stage and studio built by NBC Sports where host Mike Tirico and analyst Danica Patrick welcomed viewers for both the NBCSN Pre-Race Show at 9 a.m. and the NBC Pre-Race Show that began at 11 a.m.

As the cars take their place on the grid, the frontstretch fills quickly with celebrities and VIPs who have the precious access to actually stand on the grid next to the cars as they prepare to compete in the Indianapolis 500. This is one of the few sports where non-participants can be on the field of play in the time leading up to the big event. 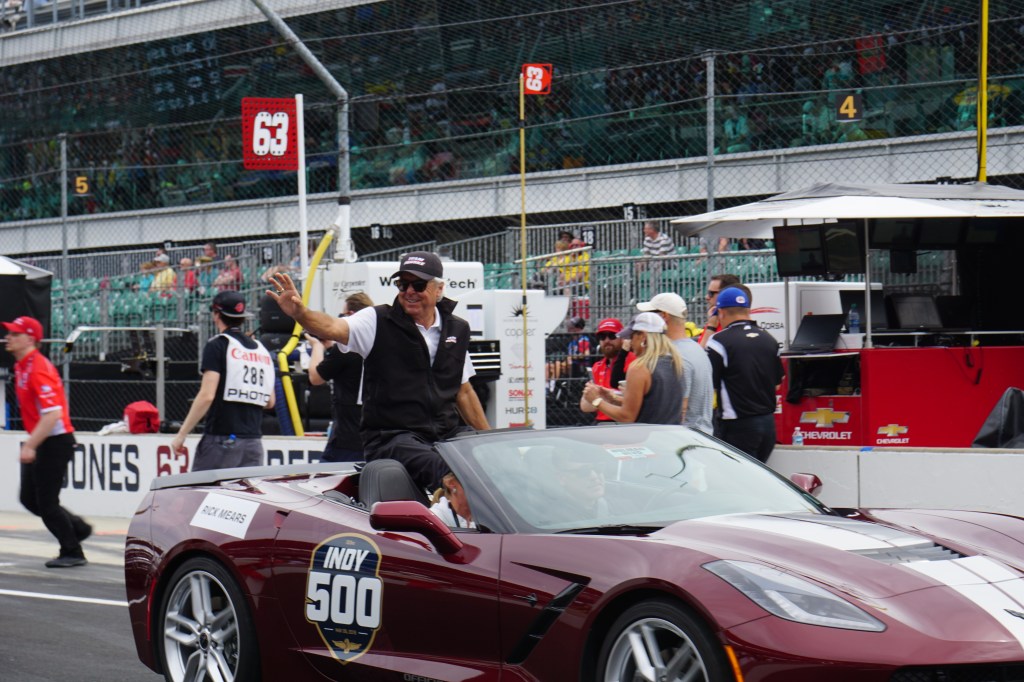 On pit road, a long line of convertibles begins to drive down the track. Each convertible has one of the “Legends of the Speedway” in the back-seat waving to the fans. It’s the annual salute to the former Indianapolis 500 winners, from AJ Foyt, Mario Andretti, Bobby Unser, Al Unser, Rick Mears, Tom Sneva, Johnny Rutherford, Bobby Rahal, Buddy Lazier, Kenny Brack, Gil de Ferran, Arie Luyendyk and Dario Franchitti, all riding in their own convertible waving to the fans who remember the days they won the race.

Indiana Governor Eric Holcomb is on the grid, posing for photos and talking with his constituents.

As the crowds on the grid swell, team owner Roger Penske is sitting in the seat of the tire cart soaking in the atmosphere. Important people from business, industry and racing stop by to shake Penske’s hand and wish him well in the race.

One of his four drivers is three-time Indianapolis 500 winner Helio Castroneves, who brings his daughter with him for driver’s introductions. After each driver in the field is introduced, three drivers per row, they pose for the annual “Class Photo” before heading to their cars. 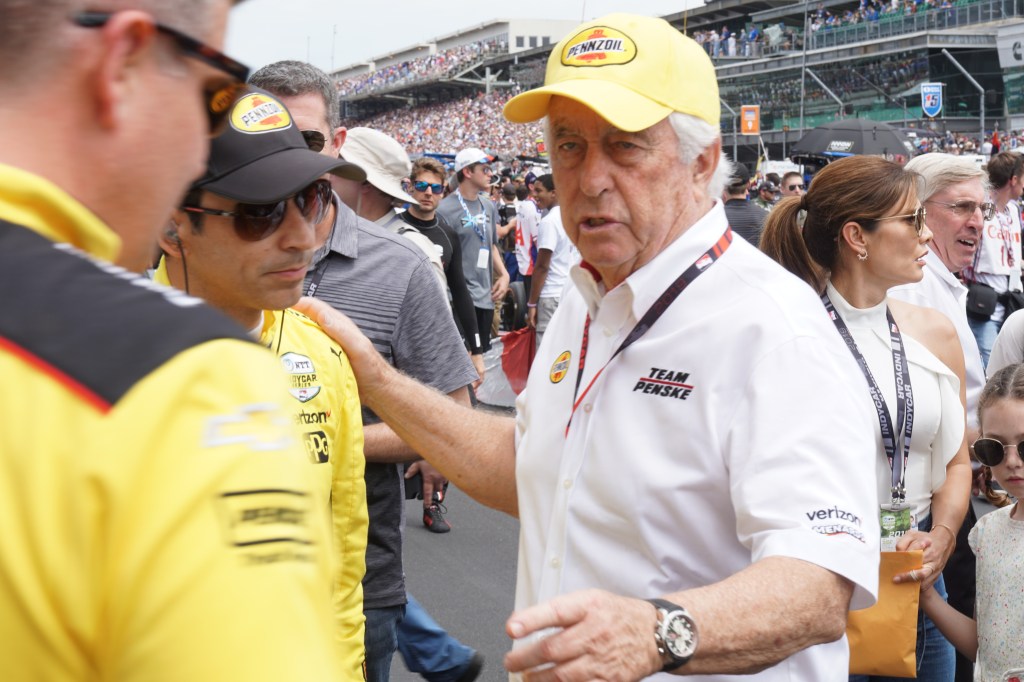 Castroneves stands to the side of his car, just a few feet in front our location. After a brief chat, he talks with Penske as they go over a few pre-race instructions. The traditional pre-race ceremonies have begun with a large focus on remembering those who gave their lives in the fields of battle that are honored on Memorial Day.

It’s an emotional ceremony that includes a military honor guard, a 21-gun salute and a single military bugler playing “Taps.”

It’s a chilling experience to hear how quiet the massive crowd gets during this part of the ceremony as they take part in the moment of silence.

After the singing of God Bless America and the National Anthem, Castroneves begins to jump around, keeping himself limber and loose before he climbs into the race car.

This year’s Military Flyover was spectacular, including an F-16 hitting the “afterburners” and climbing into the sky.

Time to move off the grid as the race start is nearing. It was off to the upper stage in Victory Lane, a great place to hear Jim Cornelison, the famed national anthem singer for the Chicago Blackhawks who attended the Indiana University School of Music perform “Back Home Again, in Indiana” followed by the traditional balloon launch as multi-colored helium balloons filled the blue Indiana sky.

It’s always a touching moment, that puts a lump in one’s throat and a tear or two for those who are from the “Hoosier State” and continue to have a deep connection to the State of Indiana. 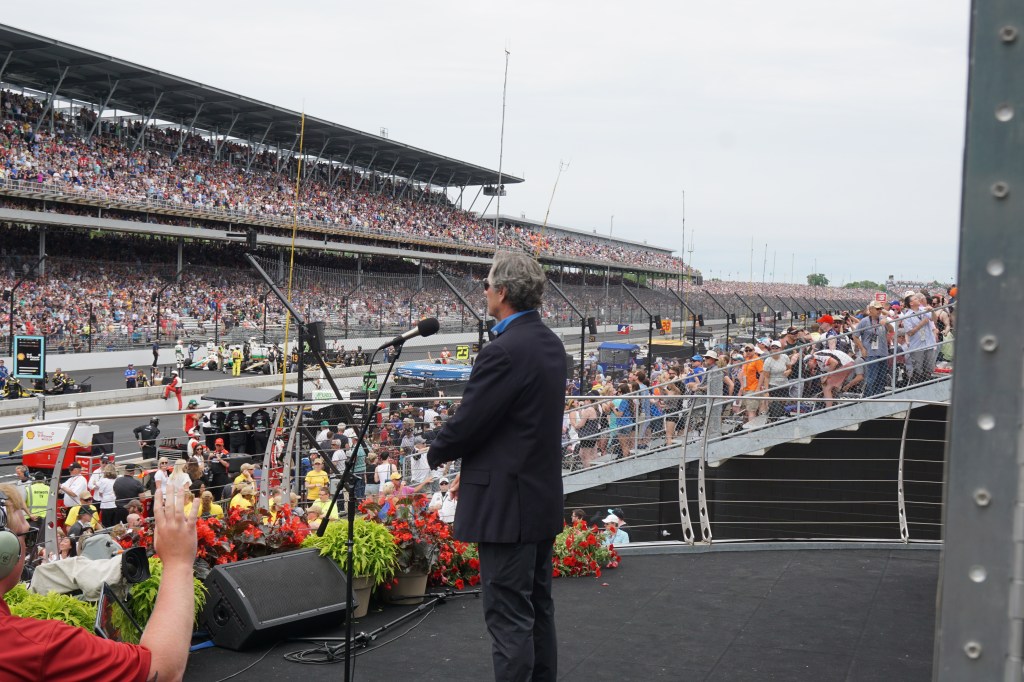 Tony George, the Chairman of the Board of Hulman & Company which includes the Indianapolis Motor Speedway and INDYCAR, steps up to the microphone, just a few feet away to give the command, “Lady, and Gentlemen – Start Your Engines!!!”

To experience that from this location was a tremendous moment. The roar of the fans could be heard with a raucous cheer as the engines come to life, ready to unleash a combined 26,000 horsepower in 500 miles of racing.

As George exits the stage, several guests and VIPs fill the area because it’s the perfect place to watch the start of the race.

One of them is Indianapolis Colts quarterback Andrew Luck along with his fiancé. He’s wearing a Stanford University cap and is enjoying himself as “Andrew Luck, Race Fan” instead of NFL star.

After the parade and pace laps, the green flag waved directly across from this vantage point and the 33 cars raced into Turn 1. After completing the first lap, they are at full-speed down the frontstretch dicing for position. 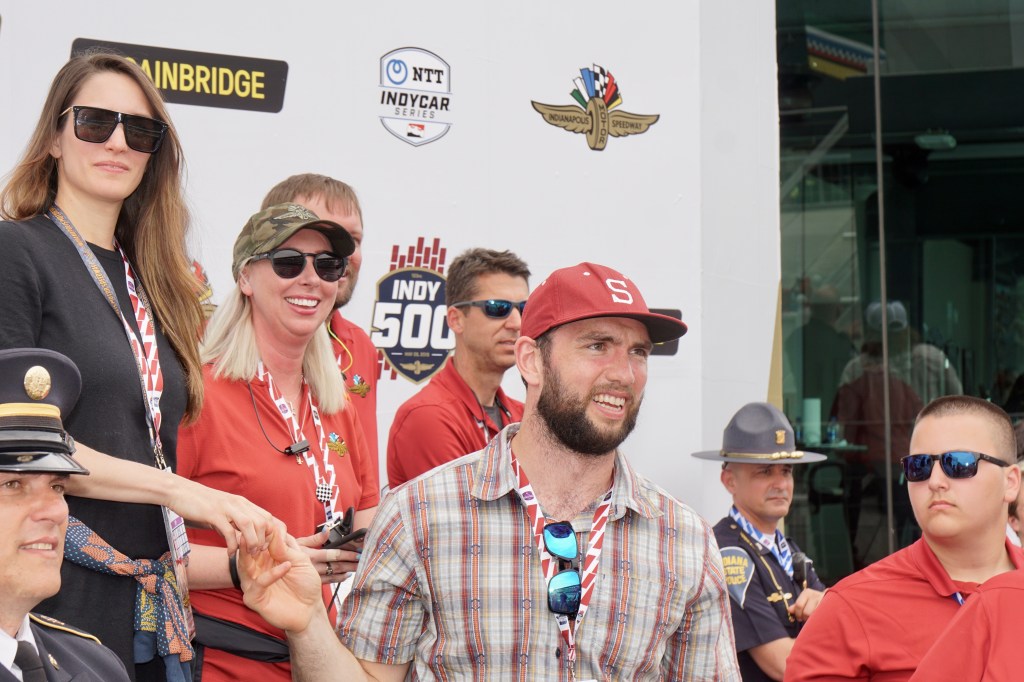 Luck has an amazed look on his face with his mouth aghast. He says to his fiancé, “Oh My God, did you see that move?”

It was unique to see a man who performs his sport under so much pressure from 350-pound linemen bearing down on him to get the pass off in time react to this ultimate sport that pits “Man versus Machine.”

By now, what happened in the race has been well-documented and Simon Pagenaud is the latest Indianapolis 500 winner.

The race was spectacular, but it was preceded by a fantastic “Backstage Pass to the Indianapolis 500.”