MOORESVILLE, North Carolina – Since winning a spectacular 103rdIndianapolis 500, Simon Pagenaud of Team Penske has had a busy week that included Monday night’s Victory Awards Celebration in Indianapolis and a trip to New York on Tuesday for a full day of media appearances.

That schedule may be light compared to what the teams have had to do.

It’s another grueling week for Team Penske and the other teams that compete regularly in the NTT IndyCar Series. After three full weeks at the Indianapolis Motor Speedway that began with practice and qualifications for the INDYCAR Grand Prix on May 10 and the race on May 11, followed by a full week of practice and qualifications for the 103rdIndianapolis 500.

Race week was last week culminating with Pagenaud’s thrilling battle with Alexander Rossi in the final 13 laps of the 103rdIndy 500 on Sunday, May 26.

All but three of the full-time teams in the NTT IndyCar Series are based in Indianapolis. Carlin is based in Boca Raton, Florida, Dale Coyne Racing is in Plainfield, Illinois and Team Penske is in Mooresville, North Carolina.

Pagenaud’s winning crew on the No. 22 Menards Chevrolet were honored at Monday night’s Victory Awards Celebration at the JW Marriott in downtown Indianapolis. Afterwards, they boarded the team’s charter jet, known as “Air Penske” and flew to Statesville Airport in nearby Statesville, North Carolina, arriving very late Monday night.

From there, it was back to work at the race shop in Mooresville early Tuesday morning to continue preparations on the car that will race on Detroit’s Belle Isle street course in this weekend’s Chevrolet Detroit Grand Prix.

It’s not just one race this weekend, it’s a doubleheader with full races on both Saturday and Sunday.

That means no rest for the weary warriors of IndyCar.

For Team Penske chief mechanic Trevor Lacasse, it’s his second Indy 500 win as a crewmember, but it’s his first in the lead role on the crew of the No. 22 Chevrolet. He was part of the winning crew when Juan Pablo Montoya won the 99thIndianapolis 500 in 2015.

Now, it’s off to Detroit. 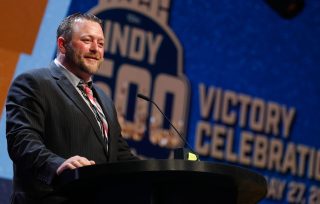 “We’re going to try to get Roger Penske some more wins at his race this weekend in Detroit,” Lacasse told NBC Sports.com. “We flew home after the Victory Banquet Monday night, worked all day Tuesday to get the cars ready for Detroit, had a bit of a rest on Wednesday, then we leave for Detroit on Thursday to start setting up for Friday’s practice.”

Because Pagenaud’s No. 22 Dallara/Chevrolet won the 103rdIndianapolis 500, it is now taken out of the rotation. Team owner Roger Penske always puts the winning Indy 500 car aside, where it will be refurbished and become a “museum piece.”

Penske has 18 “museum pieces” for his 18 Indianapolis 500 victory, far and away more than any other team.

“The good news is we get to retire a car, but the bad thing is we have lost a car in the rotation,” Kyle Moyer, Team Penske General Manager, IndyCar, told NBC Sports.com. “We’ll have to move Helio Castroneves’ car into the rotation for Simon to get ready for Texas.”

The car that is being retired was one of Pagenaud’s cars from his 2016 season. It was put into the rotation in 2013 and was number 042.

“It’s been around for a while and has won a lot of races,” Moyer said.

For the rest of the cars in the Indy 500 in the Team Penske stable, the equipment beat the team back to the shop in Mooresville, North Carolina.

“All of Team Penske’s cars besides Simon’s went back to North Carolina on Sunday night after the race,” Lacasse explained. “We got some help from our Sports Car guys and the rest of the crew to get the cars turned around for Detroit.

“That’s the great thing about this team, everybody pitches in and helps each other. On Sunday, we might show up with a different shirt on, but it’s all one team. We have three cars identically built and it’s a team effort.”

The cars and parts left Indianapolis for Mooresville, North Carolina Sunday night. On Monday, the computers and office equipment in the Gasoline Alley garages – Team Penske’s home away from home the past three weeks – were loaded up and carted off.

“We have a group of guys that flew home Monday morning to help get things turned around, while the rest of us got to stay for the banquet,” Lacasse said. “We flew home and were all at work bright and early Tuesday morning.

“We’re in business to win races. As Roger Penske said when we went out to ‘Kiss the Bricks,’ 18 wins in the Indy 500 is pretty good, but he has 20 wins circled in his book.

“Now that, would be pretty cool.”

Moyer is the general manager, IndyCar, at Team Penske. He told NBC Sports.com that the team’s street and road course cars for Detroit were actually prepared last week, to give them a head start on the back-to-back events on the same weekend.

“Having our Sports Car team come in on Memorial Day was a bonus for us because it helps out everybody there,” Moyer said. “Everything has to be loaded and off to Detroit.

“The big turnaround is after Detroit. Then, you have only two days to get ready for that one and you are flipping cars from street course to oval.” 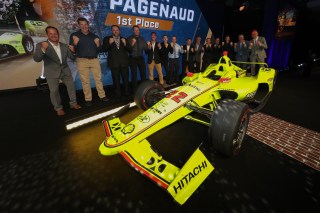 How does an IndyCar team keep the crew fresh during such a demanding part of the schedule?

“The good thing is everybody knows the situation,” Moyer said. “We had Wednesday off and that was really good for the guys. Detroit is two races that go by quickly, then it’s off to Texas.

“Then, we’ll have some time off. After Elkhart Lake, we get a two-week break and I can’t remember the last time we’ve had two weeks off in the season in IndyCar.”

“I still have two more fingers I can put a ring on,” Moyer said. “We’ll keep working on it.”