INDIANAPOLIS – When Hailey McDermott woke up early on Race Day, Sunday, May 26, she had a premonition that her fiancée, Simon Pagenaud, was going to win the Indianapolis 500 that day. It’s the same feeling Liz Power had the year before when her husband, Will Power, won the 102ndIndianapolis 500.

“I felt so confident coming into this weekend,” McDermott admitted. “I’m the type of person who never says they have a feeling.

“I had a feeling.

“We both had the feeling. It’s the weirdest thing. How can you have a feeling? I believe this place chooses you. I now understand it.

“To be blunt, I practiced ‘Kissing the Bricks’ in my dress before we came out, just in case. And it worked.

“I’m in shock. I think it’s going to take a while. This is place is magic.”

The relationship between McDermott and Pagenaud got off to a rather inauspicious start, however.

When McDermott was asked in 2012 if she wanted to have dinner with a race driver, who immediate reaction was decisive.

The native of San Diego, California is a typical Southern California girl and she was working for Bowers & Wilkins – a high-end brand of stereo speakers that was sponsoring Sam Schmidt’s NTT IndyCar Series team.

“They asked me if I wanted to meet a race car driver and I said, ‘No. No Thanks. No Thank You.’”

That driver was a young Frenchman named Simon Pagenaud. He was part of the old Champ Car Series in 2007, but after that series folded and many of its teams were absorbed by the Indy Racing League to form what is today’s NTT IndyCar Series, Pagenaud was out of a ride.

He went Sports Car racing with Gil de Ferran and didn’t get back to IndyCar until 2011, when he drove three races for Dreyer & Reinbold Racing.

In 2012, he ran all 15 races for Schmidt-Hamilton Motorsports and that is the year he had his chance encounter with a Southern California blonde who had no interest in meeting a race driver.

“I just wasn’t sure,” McDermott told NBC Sports.com. “I wasn’t sure if he was going to be pretentious. Somehow, they got him over to my table.

“We sat there for three or four hours and just talked.

“It sounds so cheesy, but it was like we were the only ones in the room. After that, it was so easy. It wasn’t awkward at all. And we weren’t even talking about racing. I had heard of the Indy 500, but I had no idea what it was. I had never seen an IndyCar race.

That dinner was at the JW Marriott in Indianapolis in 2012. The two have been together ever since.

Pagenaud asked McDermott to marry him this past January. The two are currently engaged but won’t reveal the wedding date.

The two will enjoy a wedding celebration one day, but for now, they have an Indianapolis 500 victory to celebrate for a lifetime.

“You don’t usually want to lead the Indianapolis with more than one lap to go,” McDermott said. “Alexander Rossi was right there and put up a hell of a fight.

“I was concerned about fuel. Simon’s car has been on rails all month. If you can fight with anybody, you want to fight with Rossi, because he is one of the best. When you are racing with your teammates, like Josef Newgarden and Will Power, there is a certain level of respect, kindness and love.

“Rossi, he is a Badass and he has won this before. It’s always harder to get your first Indy 500 than your second. I’m just happy we got our first one. I couldn’t be more proud of Simon for racing hard, racing safe, racing smart, being responsible and sticking to his guns.” 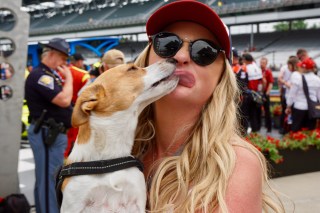 That is one reason why they named their prized puppy, “Norman.” The Jack Russell Terrier is their constant companion and was part of the Victory Lane Ceremony.

“Norman freaked out,” McDermott said. “He is very excited and thought, ‘I want to lick some of that milk off your face, Dad.’ Norman is enjoying all of the attention.”

While Pagenaud was posing for photos with the winning crew in Victory Lane, McDermott got a big, slobbery, wet kiss from Norman. He is the most famous dog in IndyCar and has his own Twitter account — @NormanPagenaud.

Her premonition was a strong one and she was confident it would end up in Pagenaud’s favor.

“When I found out Simon got Roger Penske’s 18thpole here, I thought we could get his 18thIndy 500 victory because 18 is Simon’s lucky number,” she said. “I thought, ‘c’mon.’”

It was especially gratifying considering Pagenaud entered the month of May considered to be in jeopardy of losing his ride at Team Penske at the end of the season. With a “May Sweep” with wins in the INDYCAR Grand Prix and the 103rdIndianapolis 500, team owner Roger Penske said his driver will “absolutely” be part of his team next year.

“Last year was difficult,” McDermott said. “He always went out and tried his best but wasn’t comfortable. He always knew what his potential was. It’s nice to come out this year and show everybody, ‘Hey, he didn’t leave. He didn’t go anywhere.

McDermott is friends with Rossi’s girlfriend, Kelly, and said she has nothing but love for both of them.

For now, however, McDermott is riding that wave like the Southern California surfer that she is. 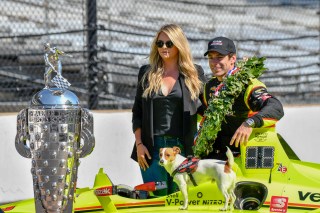 “It comes in waves,” McDermott said of her emotions. “We will look at each other and say, ‘We won the Indy 500.’ It doesn’t feel real yet.

“When I saw Simon stop on the ‘Yard of Bricks’ after he won the race, I was asking myself, ‘Did I pass out?

“Is this a dream?