DETROIT – Alexander Rossi proved determination can take a race driver to the next level when he used aggression bordering on anger to nearly win last Sunday’s 103rdIndianapolis 500. This weekend at Belle Isle, the NTT IndyCar Series driver at Andretti Autosport is hoping determination is the key to victory at Detroit.

Rossi was the fastest driver in Friday’s second practice session with a fast time of 1:15.1367 around the 2.35-mile, 14-turn temporary street course at Detroit’s Belle Isle in the No. 27 NAPA Honda.

Rossi dominated last year’s second race in the Chevrolet Detroit Grand Prix when he started on the pole and led 46 of the 70 laps in the contest, his race ended in disappointment. Rossi appeared to be on his way to another victory before his Andretti Autosport teammate Ryan Hunter-Reay was able to go off-strategy, run laps in the race as if he were on a qualification run, and pressure Rossi into making a mistake toward the end of the race.

Hunter-Reay was successful in getting to the rear of Rossi’s Honda and causing him to lock up the brakes going into the turns. Finally, on Lap 64, Hunter-Reay’s strategy paid off and Rossi’s left front rear went flat and that sent him into the runoff area in Turn 3. 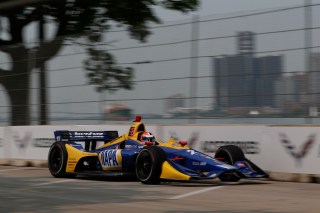 “We have some unfinished business here,” Rossi said. “It was really disappointing. We led so much of the race and to have it go away the way it did sucks. We know we have a great race car. We’ve been strong here. We’ll keep chipping away and hope we win tomorrow or Sunday.

“That’s the cool thing about this place, we have two shots at this track every year.”

The last two years, Rossi has dominated one of the other street courses on the schedule, winning the Acura Grand Prix of Long Beach from the pole in consecutive years.

But he has never won on the streets of Belle Isle in Detroit in six previous starts.

“There are no comparisons between here and Long Beach other than they are both street courses,” Rossi said. “We’ve had a strong car here, but not a dominant car like we have had at Long Beach. Getting third last year in Race One was good. We should have been on the podium in Race Two, but that didn’t happen.

“I think we have a top-five car. It’s a matter of executing in both races.”

The track surface is also rough and bumpy, giving a driver a jarring ride and taking its toll on suspensions.

“When I first came here, it was quite a shock from all of the other street tracks we come to,” Rossi said. “It’s definitely a unique place. You have to learn to love the bumps. You have to figure out ways to get around them. There are certain bumps in braking zones and in corners that if you have a slightly different line or approach with your driving style, you can mitigate the impact that the bumps have.

“I think you can see a bit of separation at a place like this just for small driving style differences, which is great. At the end of the day, even with all that being said, we saw it’s so close at the top, close throughout the whole field. That’s pretty normal of IndyCar racing.”

That is one reason why Rossi takes a racing line that comes very close to the wall. 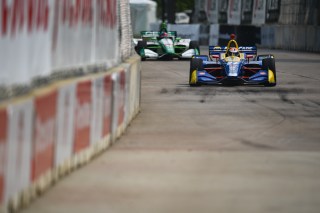 “Our MO at all of the places is to get close to the wall,” Rossi said. “It’s tricky. It’s super bumpy. It’s one of the bumpiest tracks we go to. You learn to love the bumps. You can dictate the car based on certain bumps in certain corners.

The Detroit Doubleheader is a bit of an endurance contest to the drivers in the field who have just completed three weeks of action at the Indianapolis Motor Speedway culminating with the biggest race in the world in the Indy 500.

Rossi finished just 0.2086-of-a-second behind Simon Pagenaud in a thrilling duel in the final 13 laps of the Indy 500 after leading five times for 22 laps.

Rossi has not watched the NBC replay of the 103rdIndianapolis 500. It’s an ending he doesn’t want to relive.

“I roughly know what happened.”

Drivers and crews have to strike a balance between physical and mental exhaustion entering the Detroit Doubleheader.

“Indianapolis isn’t that physical, but from a mental aspect, it’s a long month with a lot of information you are trying to take in, you don’t have a lot of time from a mental aspect to rest,” Rossi said. “We’re on Detroit, so that’s what’s important. We’re going to go try to win two races. There’s weather potentially coming, and we’ll see what happens.

“We’re focused on Detroit. Trying to maximize the weekend here. From a points perspective, it just as important as the 500. This is a really important stretch of races in the championship. Now that Indy is behind us, it’s really our only focus.” 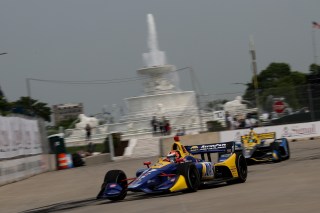 Rob Edwards is Andretti Autosport COO and calls Rossi’s race strategy. The two have developed a very good working relationship that has made the No. 27 car one of the most feared on the race track.

“He’s pretty good when he is angry, that’s for sure,” Edwards said. “He has a sense of aggression on the track, but he has a great sense of humor with the crew. He fits in perfectly with this team.

“He has won at Long Beach the past two years and clearly had an opportunity to win here the last two years. Every street circuit you go to has subtle differences. Long Beach has come very naturally, but here we are working through those differences.”

Long Beach has some long and fast straights. Detroit has shorter straights.

“We have high-speed in Turn 1 and Turn 2 here and the complex in Turns 7-11 and that is similar to the complex with the Turn 4 and Turn 5 area in Long Beach,” Edwards explained. “Here, it’s bumpier and the track surface is different.

“The bumps and the track surface are the two biggest differences.”

When Rossi is driving at his peak performance, he is so good it’s like he is racing on a different track than the other drivers.

It’s like watching Michael Jordan play basketball in his prime.

“You have to have that foundation to make some of those decisions. 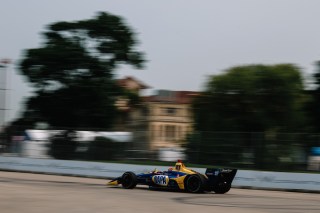 The good thing about the NTT IndyCar Series schedule is the losers of the Indy 500 don’t have long to dwell over the outcome. It’s off to the next project and in this case, it’s the only doubleheader of the year.

There is too much work to do.

“That’s the beauty of racing – there is another race next weekend and the opportunity to win the next one.”