DETROIT – It was a cold, overcast Thursday, but Simon Pagenaud was “Mr. Sunshine.”

The winner of the 103rdIndianapolis 500 was still living on adrenalin from the biggest victory of his career and going from one personal appearance to the next in advance of this weekend’s Chevrolet Grand Prix of Detroit.

It’s been a busy week for the first driver from France to win the Indianapolis 500 since Rene Thomas in 1914, but this is what a racing driver lives for. 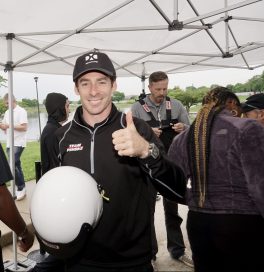 “I’ve had six hours of sleep in the last 48 hours, but I don’t care, I can sleep later,” Smiling Simon told NBC Sports.com Thursday as he was about to give Pace Car rides around the temporary street course at Belle Isle to Chevrolet guests on Thursday. “I don’t feel tired at all. After the race, I didn’t feel human. But I got my sleep the last two nights so I’m ready to go.”

Pagenaud must switch gears from the biggest race of the year on the massive 2.5-mile Indianapolis Motor Speedway oval to a tight, demanding 2.35-mile, 14-turn temporary street course on an island in the middle of the Detroit River.

On top of that, it’s two races in one week with 70-lap contests on both Saturday and Sunday.

And, it’s the “Boss’s Track” as Pagenaud’s team owner Roger Penske is the track promoter of the Chevrolet Grand Prix of Detroit.

“It’s pretty simple – we’re racers and all we want to do is set next challenges and next goals,” Pagenaud told NBC Sports.com. “I’m ready. I feel so energized. I’ve never felt so much energy in my life.

“Obviously winning carries, me with a lot of momentum. Now, I’m focused on Detroit. It’s a big race for us at Team Penske.

Pagenaud scored his first career victory at Detroit when he was with Schmidt-Hamilton Motorsports in 2013. That team is now Arrow Schmidt-Peterson Motorsports. He moved over to Team Penske in 2015 and has a second-place finish here in 2016 and a fifth-place in 2017.

The Indy 500 winner has won at Detroit in the same season just one time. That was Helio Castroneves in 2001.

There are plenty of past Indy 500 winners that have won at Detroit, including Bobby Rahal, Danny Sullivan, Dario Franchitti, Tony Kanaan, Scott Dixon, Will Power and Ryan Hunter-Reay, but never in the same season they won the Indy 500.

When Castroneves won Detroit after the Indy 500 in 2001, it was preceded by a race at the Milwaukee Mile short oval the week after Indianapolis.

“I would like to be the first and add numbers again,” Pagenaud said. “This is a fun track. I really enjoy it. This is a very physical weekend. I think that is an advantage for us.

“It is a grueling media tour after the Indy 500, and you go through so much emotion. Some may have struggled through the task at hand. I don’t feel that way at all. I want to get in the race car and have some fun.”

Pagenaud’s whirlwind started after taking the checkered flag in the Indy 500 last Sunday. He was honored at the annual Indy 500 Victory Awards Ceremony at the JW Marriott in Indianapolis Monday night, then flew to New York after it was over.

Tuesday began with a media appearance at 6:45 a.m. and concluded at 11 p.m. that night. 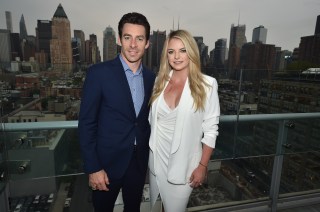 “It was awesome to be welcomed as the Indianapolis 500 winner,” Pagenaud said. “We got to the go to the Empire State Building and saw the set of Jimmy Fallon and also the set for Saturday Night Live on NBC.

“That was very cool as well.

“I was surprised that people knew about me in New York. The most memorable moment, though, was talking to President Trump.”

Because of severe weather on the East Coast, he was unable to get to Texas for another day of media appearances for Texas Motor Speedway on Wednesday.

On Friday, Pagenaud strapped himself back in his No. 22 Chevrolet for the first practice for this weekend’s doubleheader.

He also switched into “race driver mode” as he described the challenges of Detroit.

“There are passing opportunities into Turn 3 and Turn 7,” Pagenaud explained. “It’s a good track for the show. It’s grueling for everybody. It’s bumpy. You have to be on top of your game, here.”

It’s been said winning the Indianapolis 500 changes the life of the winner. Pagenaud may discover that over time.

For now, however, He is enjoying the ride and the next stop is Detroit. 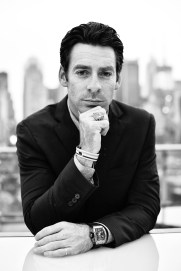 “I’m the same guy,” Pagenaud said. “I’ve won the biggest race in the world and that is a huge accomplishment for my name, my family name and my generation to come.

“This is satisfaction, but back to business this week.

“I want to keep rolling. I’m Detroit right now. I want to get going. I love driving and I want to feel those limits. I’ve set myself a new goal and that is to win the championships this year.”

Wednesday (over the phone – weather prevented him from getting to DFW):