DETROIT – Josef Newgarden’s latest victory in the NTT IndyCar Series included perfect timing on his only pit stop, a Silver Chalice and taking a dip into the James Scott Memorial Fountain at Detroit’s Belle Isle.

The perfect timing came on Lap 18 of Saturday’s lightning-delayed Chevrolet Detroit Grand Prix. The rain-soaked track forced the field to start the rain on the treaded rain tires. With the 22 cars running laps around the temporary street course, the racing line quickly dried out and by Lap 18, Team Penske president Tim Cindric called Newgarden into the pits to switch to the much-faster racing dry “slicks.”

Mere moments after Newgarden pulled into his pit box, Ed Jones crashed in the tire barriers to bring out the yellow flag. That closed pit lane for several laps and race-leader Alexander Rossi could not make his pit stop until the pits were opened.

Once Rossi led the field down pit lane a few laps later, Newgarden inherited the lead and never gave it back over the duration of the 75-minute “timed” race because of rain.

Instead of running to the scheduled 70-lap distance, the race ended after 42 laps.

Newgarden’s part of Team Penske has what is known as the “Chalice of Excellence.” It’s a medieval-looking goblet that is awarded to a key member of Newgarden’s No. 2 Chevrolet team at Team Penske before each race.

It was Cindric that got Newgarden to pit at just the right time.

“Tim is critical,” Newgarden said. “In my opinion, he’s one of if not the best strategists on pit lane. I think Roger Penske (team owner) would tell you that, too. He’s probably the best guy you could have on your stand. I feel lucky that he calls my races. I think we’ve developed quite a good relationship.

“He’s a boss, but at the same time he’s become a friend, a great teammate to me. He coaches me when I need it. Just keeps me going forward. That’s what you need from a strategist. They keep you going forward in the right direction.

“He’s very good at what he does. A lot of pressure with the team president. I don’t know, I look at it that I’ve got the best guy on my stand and it makes me feel pretty confident in the race.

“He had the chalice today. Tim was handed the ‘Chalice of Excellence’ before this race. I’d like to think that’s part of why he made that great call. Lady Luck fell at the right time.”

The timing of when to pit to switch from rain tires to dry tires, the execution to make that happen and the ability to hold off a hard-charging Rossi proved very fortunate to the race winner.

“When you talk to Roger, he’ll tell you that you make your own luck,” Newgarden explained. “It is true. We were making that call regardless. The yellow certainly helped us. We were sitting in a good position either way. It would have been very fun, very difficult to win the race without the yellow. But the yellow just fell perfectly right into our strategy.

“I think when we pitted was the right time to pit. You could tell the rain tires were starting to go off, the rears were overheating terribly because it was getting dry. You could see Rossi was struggling. Dixie (Scott Dixon) and me were catching him. Dixon looked good that part.

“We pitted at the right time and the yellow helped us even further. It was a great call.”

Newgarden called Rossi “the guy to beat today.” Rossi started on the pole and had a good lead on the rain tires before the track dried to the point where everyone could switch to the far-faster dry tires.

“It was damp out, not fully dry,” Newgarden continued. “We were going as hard as you could. Pretty toe-for-toe there for the most part.

“Having track position was critical.”

Newgarden cruised to victory, the 12thof his career and assuring team owner Penske a victory in the race that he owns and serves as the race promoter. 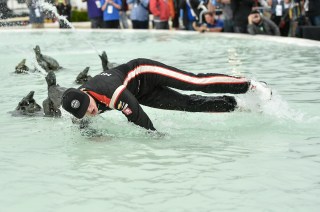 As if racing in the rain wasn’t wet enough for Newgarden, the NTT IndyCar Series points leader was encouraged by his crew to jump into the fountain behind Victory Lane.

“It was very cold,” Newgarden said. “Race suits are not very conducive to water. It’s like a sponge. It’s really bad. It started to turn into a wet suit in like five minutes, started warming up. It wasn’t a good situation.

Being fresh is a beautiful thing. People get in the fountain. You just have to oblige.

“It was shallow, not the nicest depth. I wanted to get on the lion, but I was told to not do that, otherwise we get fined. I didn’t want to get in trouble.

“Tim Cindric called the race, and, in my opinion, he got us to win again. Getting that call from Tim was perfect when we had it.”

That is why on a rainy night in Detroit, Team Penske was once again able to celebrate by tipping the “Chalice of Excellence.”