DETROIT – In a timed race, Alexander Rossi was denied victory because Josef Newgarden pitted in the nick of time.

Because of the delay, the race distance of 70 laps was changed to 75 minutes to help fit it into the NBC broadcast window. The field started on treaded rain tires, but with the track surface drying, Newgarden pitted for racing slicks on Lap 18.

Just as he came to a stop, the race course went full-course caution after Ed Jones stuffed his Chevrolet into the tire barrier in Turn 7.

Newgarden went on to lead the remainder of the 75-minute race, defeating pole-sitter Alexander Rossi by 0.8237-of-a-second.

The pit stop call was made at the right time by Newgarden’s crew at Team Penske, but the timing of the yellow flag left Rossi feeling blue.

“Again, we’re on the wrong side of the yellow,” Rossi said on finishing runner-up again after coming one spot short in last Sunday’s 103rd Indianapolis 500. “It’s part of the NTT IndyCar Series. Josef did a good job, didn’t make any mistakes there on the last stint. I think we were definitely kind of on another planet.

“I tried to push him into a mistake. We were flat out. But he’s a great driver and isn’t going to make mistakes. Ultimately with a one-groove racetrack like that, couldn’t go offline because it’s wet.”

Teams and drivers were trying to determine the right time to bail out on the rain tires because they are much slower on a dry track than the racing slicks. Marco Andretti was the first to make the change and he had to hold on to his car with all he had, because much of the course was still wet.

Rossi was still on track leading the race, when Newgarden was in his pit box, Jones crashed, and the yellow flag waved.

At that point, Rossi had to wait until the pits were opened during the caution. Per INDYCAR rules, the pits are closed immediately after a caution in order to pack up behind the safety car.

Once the pits were open, Rossi led the field down pit lane to change tires and refuel, but Newgarden could remain on track. That made him the race leader and Rossi was the first car behind him when the race restarted on Lap 22.

“It’s annoying,” Rossi said. “That’s now three times, COTA (Circuit of the Americas), Indy and here. It’s part of it. It ebbs and flows. It’s out of our control.

“I think as a team; we did everything right. We executed. We got on pole. We controlled the race in the wet. We had a great pit stop, huge execution moment for the boys in the pits. They did a good job there to ensure we stayed in front of Scott Dixon and Will Power.

“It was a flawless day for the team. Ultimately it didn’t go our way to be on the top step.” 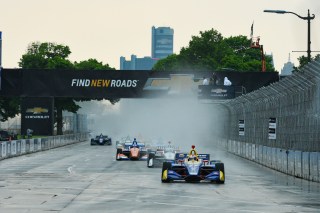 Rossi believes Scott Dixon and himself were the best in the field in full wet conditions. But Newgarden was able to hang tough and got the right call at the right time.

“He just got lucky with the yellow,” Rossi said. “We didn’t do anything wrong. We were waiting until we were in a window to make it on one stop. The wets were just about to kind of be at the end of their life. The track was about to be dry. Everything was working kind of as we wanted.

“It’s just the car went into the wall right when Josef was in. Nothing you can do about that. That’s just the way races fall sometimes, the way it works.

“You still have to go out and finish it. Like I said, we were on a different level compared to everyone else. He didn’t make any mistakes, did what he had to do to bring it home.

“I think the best two cars ultimately were towards the front.”

For Rossi and the other 21 NTT IndyCar Series drivers competing at Detroit this weekend, they get to sleep this one off and start all over again Sunday morning with another round of qualifications (10:30 a.m. ET on NBCSN) before the race at 3:30 p.m. Eastern Time on NBC.

“Obviously we have a really fast car in the dry,” Rossi said. “We’ll go out tomorrow morning and try to execute in qualifying again. Ultimately, we came in farther back in the championship than we went in just because Josef won. So that sucks. But also, the way it is.

“Who knows how it’s going to go tomorrow? Obviously, they have a fast car. Scott is fast. The Ganassi boys are quick. My teammates are quick. It’s going to be tight tomorrow. It’s going to require the normal amount of kind of perfection that we need over an IndyCar weekend to win. I’m not expecting it to be easy, but I think we have a good car.

“If we have a dry race tomorrow, hopefully we can start up front and have, more or less, a drama-free day.”