DETROIT – When Scott Dixon reflects on June 2, 2019, he will always remember it as “Royal Sunday.”

At 1 p.m. Eastern Time, Dixon was honored with a proclamation from Queen Elizabeth II of England, who bestowed upon the native of Auckland, New Zealand the “Companion (New Zealand) Order of Merit.”

Dixon proved he is part of racing royalty by scoring the 45th NTT IndyCar Series victory of his career in Sunday’s Chevrolet Detroit Grand Prix, Race No. 2 at Belle Isle. It was Dixon’s first win of the season and the second-straight year he has won one of the two races that make up the Detroit Grand Prix doubleheader. Last year, he won the Saturday race.

Dixon is third on the all-time victory list behind Mario Andretti’s 52 and AJ Foyt’s 67 victories.

“It was definitely a huge honor to get the Companion (New Zealand) Merit of Order, which is definitely very prestigious, something you don’t expect,” Dixon said. “It’s not like a normal accolade, like a trophy or a race win. It’s something of a very different feeling. So, for me it’s definitely been outstanding. I’m very proud to get that CNZM label.

“To have that recognition in New Zealand, from England as well, all part of the British Commonwealth, yeah, it’s a huge day and definitely not one I’m going to forget.”

But Sunday’s win was also a day of redemption – one that helped him forget a major error he made in Saturday’s race when he clipped the inside wall, sending him careening across the track into the tire barriers on Lap 24. The impact damaged the front suspension of Dixon’s Honda and he finished last in the 22-car field.

His Chip Ganassi Racing crew worked through the night to repair the damaged car and he was able to put it in Victory Lane by using a brilliant pit stop strategy on Sunday.

“I felt like a bit of an idiot yesterday, especially clipping that inside wall,” Dixon recalled. “Honestly, when I hit it, I didn’t think it was going to break the suspension. It did.

“Today was all about redemption. The team nailed the strategy, the car was super-fast. We were able to get the mileage we needed to, which was going to be really tough, with the exception of those last couple cautions.

“It’s pretty interesting how INDYCAR right now is stopping the races and making sure they get proper restarts. It’s definitely great for the fans. A bit nerve-wracking for the drivers, I think. You kind of just want it to be done. I would have been happy for it to end under caution. It wasn’t going to go that way.”

Dixon was in the lead when his Chip Ganassi Racing teammate Felix Rosenqvist crashed in Turn 1 with five laps left in the race. By red-flagging the event, INDYCAR was able to remove Rosenqvist’s car, clean up the debris off the track and ensure a green-flag finish for the fans that filled Detroit’s Belle Isle Park.

According to track promoter Bud Denker, the three-day total for the Chevrolet Detroit Grand Prix was 95,000. That means Sunday’s race had over 30,000 spectators on the island in the Detroit River, between downtown Detroit to the West and Windsor, Ontario to the East.

“We’re just happy that we got the win, the first win out of the way this year,” Dixon said. “Points-wise it was a big day for us. I thought when you get to that hundred-point deficit, we were pretty close to it after yesterday’s result, it was going to be tough.

“We almost halved that today. We’ll keep working on that this week coming with Texas. Hopefully we can get on a bit of a roll here.”

Dixon’s drive to victory came with a strategy that had him stay on the softer Firestone “Reds” for as long as he could hang on. Most of the field of competitors ditched the soft “Reds” during a caution period by pitting on Lap 2 for the harder, more durable Firestone “Blacks.”

“The way the whole strategy played out, I saw the whole field pit on Lap 2, and I thought, ‘Oh, dear, I’ve seen this movie before, and it didn’t work out very well,’” Dixon recalled. “We knew we had to try and create the gap. We had to try and go as long as possible on the Reds, so at least we had only one more stop to go. We tried and we tried. They just fell off a cliff.

“I think we started losing almost four seconds a lap. (Spencer) Pigot had the same issue. We came in, dove into the pits, then the caution came out, which was definitely a little bit of a life saver.”

Saturday’s race winner Josef Newgarden pitted at the right time just before the yellow flag waved for a crash. On Sunday, the same thing happened for Dixon, who pitted on Lap 14. A few moments later, Spencer Pigot’s Chevrolet veered in front of Sebastien Bourdais’ Honda as Pigot was trying to get to pit road to get off his Firestone “Reds.”

Bourdais’ car ran into the back of Pigot’s Chevrolet, and Bourdais went airborne briefly before landing on all four wheels. The front nose of Bourdais’ car was damaged, but he was able to limp it around the race course. When the pits opened, his Dale Coyne Racing with Vasser and Sullivan crew were able to replace the front nose and wing assembly and keep him on the lead lap. 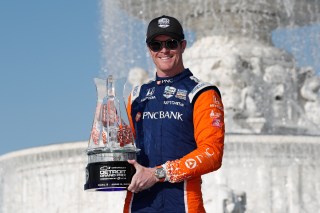 Dixon could now make it the rest of the race on one less pit stop than the other competitors in the field.

“Still even from that point, to get the fuel mileage, pretty big numbers we had to reach,” Dixon said. “We knew that the other pack was going to try to stretch it out. They could run as hard as possible if they had some clear air. Never seemed to really go. The pack stayed quite tight.

“We had some issues there with Hinch (James Hinchcliffe) and Pato (Patricio O’Ward), slowing us down. I was kind of worried about that for a point there. He had the issue with his car, which I thought they were going to let go for a while, maybe just pull it in. That didn’t happen.”

With Pittsburgh Steelers head coach Mike Tomlin watching from his pit as guest of team owner and Pittsburgh native Chip Ganassi, Dixon was determined to redeem himself on Sunday after his Saturday crash.

“I was definitely pretty miserable,” Dixon said of his Saturday night. “I think I went straight back to the bus and stayed in the whole night, didn’t go see anybody. I went and hung out with the team when they were repairing all the damage I caused.

“When scenarios like that happen, you feel really bummed. When you know all the effort that goes into these race weekends, especially a doubleheader right off of Indy, we had a bad run at Indy, yeah, you just want to try and make something positive out of it.

“I felt like we had a car that was definitely capable of pole, but we just didn’t really do it this morning. It was perfect for them to kind of dig me out of the situation that we had from yesterday and earlier in the race. I just tried to keep it off the walls.”

As an added bonus, Dixon’s win combined with NTT IndyCar Series points leader Josef Newgarden’s crash on Lap 33 allowed Dixon to make up a huge deficit in the points. He entered Sunday’s race 92 points behind Newgarden. With the win and Newgarden’s 19th-place finish, Dixon trimmed that to a 52-point gap.

“At least we’re kind of in the mix,” Dixon said. “We’ll just keep our head down and try to make the best of it.

“Going for the wins is kind of what we’ve got to do. I think with the competition right now, it’s never one other driver; you’re fighting a constant of five or six people. After Indy, it actually got really tight for the first five or six. Previous to Indy, it seemed like two or three kind of stretched out.

“This year I think is going to be another year, especially from this point, you’re going to have to be really consistent to get a championship. It’s how we won last year. We did have three wins, but we were able to turn bad weekends into good ones. We’ve seen that from Josef. Some pretty average qualifying positions. Him and the team have been able to pull out some great podiums, some big wins when they really needed it.” 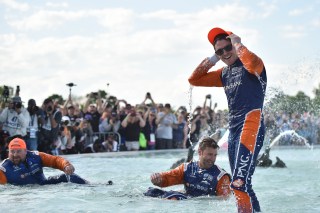 With the next NTT IndyCar Series race just six days away at Texas Motor Speedway, Dixon has a very busy week. He will take part along with Newgarden in the annual Chevrolet Detroit Grand Prix Winner’s Tour followed by a trip to the Ford simulator for the 24 Hours of Le Mans on Tuesday. He will spend Wednesday in Houston hanging out with IndyCar legend A.J. Foyt and then arrive at Texas Motor Speedway on Thursday.

Dixon has represented racing royalty with his incredible career that includes five NTT IndyCar Series championships, 45 victories including the 2008 Indianapolis 500. As of Sunday, he is now part of royalty in the British Commonwealth.

Dixon will receive a proclamation and medals in a ceremony later this year, either at the New Zealand government in Auckland, New Zealand or elsewhere in the British Empire.

“If we can do the British ceremony in London, that is what we will try to do,” Dixon said. “What makes it so special is this is being honored as a person, not a race driver.

“It’s overwhelming in some ways.”