DETROIT – Marcus Ericsson of Arrow Schmidt Peterson Motorsports is finally feeling more like a NTT IndyCar Series driver than a Formula One refugee.

The 28-year-old driver from Kumla, Sweden had his best finish yet when he was second to race winner Scott Dixon in Sunday’s Chevrolet Detroit Grand Prix Race 2 at Belle Isle.

It was Ericsson’s first podium finish since 2013, when he was in what’s now known as Formula 2. That race was in Abu Dhabi and Ericsson finished second to Alexander Rossi.

“I don’t even remember, it’s been so long ago,” Ericsson quipped when reminded of that performance. “It was very special. Like we said, it was my first podium since 2013. That’s been an extremely long time. I missed that a lot, that feeling. Then to be up there with two legends like Scott Dixon and Will Power, to run with these guys, running behind Scott Dixon, Indy last week I was running with Scott. You just learn so much running behind these guys because they are so experienced, good drivers, doing the right things.

“It was nice mixing it up with them. Hopefully we can continue that for the rest of the year.” 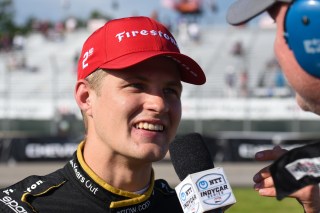 One of the first people to meet Ericsson on pit lane after his runner-up was his Arrow Schmidt Peterson teammate, James Hinchcliffe. At one point in the race, it looked like Hinchcliffe would be the driver fighting it out for the win. But that came to a crashing halt in Turn 3 on Lap 33, when he, Rossi and Saturday’s race winner, Josef Newgarden, all tangled while racing for position.

Rossi spun, but was able to keep the engine fired and drive away. Newgarden and Hinchcliffe, however, were essentially out of contention. Newgarden’s crew would eventually fix the damage on his car, but when he returned to the race, he was 21 laps down. Hinchcliffe later came to a halt on track with a loss of power at Lap 55.

“It worked out for one of us,” Hinchcliffe told Ericsson on Victory Lane.

After congratulating his teammate, Hinchcliffe reflected on his teammate’s season so far.

“Honestly, Marcus has shown such great race pace all season long,” Hinchcliffe told NBCSports.com “He hasn’t had great luck in qualifying, but he has shown in a lot of races he can move up. Today was a great example of that. He kept his head clean, did what he had to do and I’m happy for the guys on the 7 crew.

“His race craft all year has been top-notch. When he had those restarts, I don’t think anybody was worried he couldn’t hold his own. The car was quick, and the team did an incredible job. It’s not the results we wanted on the 5 car, but Marcus and the 7 car were able to get a podium for the team.

“It’s unfortunate my race ended that way. Josef got a little overambitious and Alex had nowhere to go. Something happened as a result of the contact that killed the engine. But that’s racing.”

In 97 Formula One starts, Ericsson never finished on the podium for backmarker teams Caterham and Sauber (now Alfa Romeo). But in just his eighth NTT IndyCar Series start, he netted perhaps the most important result of his career so far.

“It was a tough race, but we knew we had a good car,” Ericsson said. “We had a really good lap going in qualifying but made a mistake in Turn 11. Today, the race went very smoothly. The guys did a great job on the pit stops and great strategy calls as well. It was tough on the restarts and then the Red Flag, it was nerve-wracking last 30 laps.

“I’m very happy to finally finish the job. It’s been a very, very long time to get a podium. We’ve had a tough start to the season. We’ve had the pace, but I’ve made some mistakes. To finally have a great race in all aspects and bring home a result like this is a reward for everyone.”

With Power in his rear-view mirror, that could have been an intimidating sight for Ericsson. But he didn’t flinch. 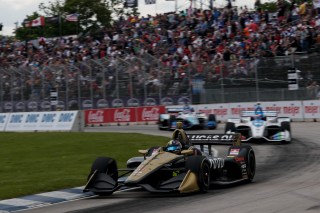 “It’s all new tracks for me this year and that is a big challenge. Saturday, in the weather, I learned about this track and how to get around it and I used that today to my advantage. Today, I showed the potential this team and I have together.”

Prior to Sunday’s race at Detroit, Ericsson had yet to get his season in gear. He finished 13th on Saturday, which ended a three-race streak of finishing 20th or worse.

“I’m super happy,” he said. “It’s been one of those years where we’ve had pretty much every weekend good pace, but for some reason there’s always been something that’s happened, it’s made it not come together result-wise. I think our results have not been sort of representative of the pace we’ve got.

“That’s why it was such a nice feeling finally to get it together for a whole race today. Even in [qualifying], we had a great car. Didn’t get the perfect lap together, but in the race executed very well. The team did great strategy calls, pit stops. I have to thank the crew because they did an amazing job.”

Because of his Formula One background and European racing pedigree, Ericsson was expected to be a quick learner in the NTT IndyCar Series. But it’s taken time for him to adapt to the less technical but more strenuous Indy cars.

“Yeah, for sure,” Ericsson said. “I think I came into this year with a lot of experience. My goal and expectation was to run up front from the start. I think we had the pace to do it, but it’s been a bit of a deeper learning process than I maybe expected.

“I didn’t underestimate the series, but it is a very tough series, it’s a lot of experienced guys in the series that are incredible drivers and also teams. That’s been a sort of process for me to get used to all that, get used to the tires, the cars. Everything is quite different.

“I think the pace we’ve shown all the way through; the results was going to come. I’m just really happy it did today because I think we deserve that. The team did deserve that because they’ve done an amazing job all year.” 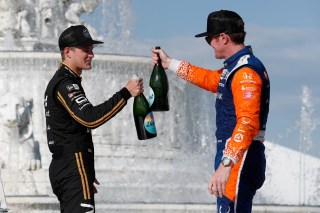 The change of schedules was also something to get used to. In Formula One, Ericsson usually competed every other week. This past week in IndyCar, he competed in his first-ever race on an oval – the 103rd Indianapolis 500 – and just six days later, he followed that with two races in a doubleheader.

He has also learned that a race driver can be fast, but that doesn’t mean they will score a good result because of the competition level in the series.

“In many other series, if you have the pace, you always sort of tend to get to the front for different reasons,” Ericsson said. “Here in INDYCAR, it’s so close, the competition between P1 and P22 or 24 is a second. That means you have so many moments in a race where you need to execute well. You need to make the pit stops; strategy calls right. The pit crew needs to do their job right. Out laps on cold tires, restarts, all these things. It’s such a complex and difficult series.

“I think that’s something I learned this year. Today was definitely like that. So much going on. A lot of restarts. Yeah, it was a difficult one. That’s why it makes me even more happy that we actually executed the way we did. I think we did everything right.”

It led to a milestone of sorts: Ericsson’s podium finish was the best IndyCar result from a Swedish driver since Kenny Brack finished second at Japan’s Twin Ring Motegi in 2003.

With two Swedish drivers in this year’s field – fellow rookie Felix Rosenqvist of Chip Ganassi Racing is the other – Ericsson expects them and IndyCar to keep making headlines in their home country.

“… With both me and Felix coming to the series, there’s been so much attention in Sweden, Swedish media,” Ericsson said. “Also, so many fans writing to me, saying, such a great series, it’s so fun to watch, it’s so exciting to see you fight for top positions. Fans are really excited about that.

“I’m sure when I check my phone later, there’s going to be lots of things going on. I’m proud of that support. I’m happy to show them or give them a result like today.”