DETROIT – A disappointing doubleheader weekend in Detroit is not going to get Simon Pagenaud down. The winner of the 103rd Indianapolis 500 is already looking ahead to his next challenge that could put him back in the spotlight.

Next up is the DXC Technology 600 at Texas Motor Speedway, the first of three Saturday night races on the NTT IndyCar Series schedule.

“I think Texas will be really good for us,” Pagenaud said. “I always run strong there. It’s one of my favorite ovals. I welcome it. I love the car we had there last year, and we have made progress on it, too. It should be a good battle and a good show for Team Penske.”

In seven previous starts at the 1.54-mile, high-banked oval, Pagenaud has four top-five finishes. He was fourth in 2016, third in 2017 and second in last year’s race that was won by Scott Dixon. That was his best race of 2018.

More recently, tired and weary, but still happy from his big win in the Indy 500, Pagenaud left Detroit looking forward to a recharge after his life-changing week.

At least now, Pagenaud can finally get a good night’s sleep.

“I’m going to sleep a lot,” Pagenaud said. “I don’t want to sound too disappointed, because I won the Indy 500. I leave here feeling very blessed.

“It’s been a very busy weekend for the Team Penske drivers because of the sponsors, but this is the most tired I have ever been on a race weekend. It’s such high competition here. You better be prepared when you show up at a race.”

Swept up in the whirlwind that surrounded his dramatic win in the 103rd Indianapolis 500, Pagenaud arrived in Detroit last week after an extensive media tour that took him to New York last Tuesday.

More media interviews took place the next day, and additional team and sponsor obligations involving the Chevrolet Detroit Grand Prix followed upon his arrival in Detroit.

No wonder Pagenaud told NBCSports.com that he was looking forward to getting back in the race car so he could finally relax.

Pagenaud was hoping to join Helio Castroneves (2001) as the only Indy 500 winners to win at Detroit in the same season. But he ended up having a mixed weekend.

The Frenchman had a decent Race 1 on Saturday, starting 13th and finishing sixth in what became a 75-minute timed event due to severe weather. But with sunny skies and near-perfect conditions for Sunday’s Race 2, he was involved in a first-lap crash in Turn 3 that also caught multiple others. 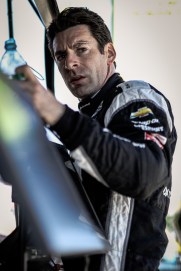 The incident left Pagenaud’s Chevrolet with a gear sensor failure, forcing him to the garage. His Team Penske crew made repairs and got him back to the track, where he took the checkered flag in 17th, 12 laps down.

“I got a good start, was right behind Will Power and I got hit in the back,” Pagenaud said. “We had a gear sensor damaged so I couldn’t restart the car. I had to wait for the car to come back in the pits and the guys fixed it. I got six points by returning to the race and that could be very important at the end of the season.

“We had the fastest lap in the race by a half-second. The car was really, really good. Too bad we couldn’t have raced because we could have challenged for it today. It could have been some good points. But we got pretty lucky today. Josef Newgarden had problems and that is a shame for Team Penske, but Alexander Rossi didn’t score too many points, either.

“I’m glad I got to race today, otherwise I would have been disappointed. But I got to run a lot of laps and that was really good. We have some valuable data for the next street race at Toronto, we found the speed, but it was just too late. Most teams would have given up. But at Team Penske, we never give up. It was an important weekend for us to get through.”

Cadillac and Chip Ganassi Racing announced their driver lineup for a 2023 entry in the FIA World Endurance Championship, the sports car series that includes the 24 Hours of Le Mans.

The Cadillac V-LMDh entry will be driven by Earl Bamber and Alex Lynn, who were teamed on the No. 02 Cadillac that competed in the IMSA WeatherTech SportsCar Championship DPi class this season and won the Twelve Hours of Sebring. The third driver will be Richard Westbrook, who will return to Ganassi after helping the team to a GT class win at Le Mans in 2018.

The team also will compete in the Rolex 24 at Daytona in the rebranded Grand Touring Prototype premier category, which is designed for crossover between the top prototypes in IMSA and WEC. Ganassi will field a second entry at Daytona with its No. 01 Cadillac that will compete full time in IMSA with Sebastien Bourdais and Renger van der Zande.

A Ganassi spokesman said the team hopes to run its second entry in the 2023 24 Hours of Le Mans but only its WEC team is confirmed (an AOC invitation would be required for the IMSA team). The team also is exploring options but currently plans to have the WEC’s team base of operations in Indianapolis.

Ganassi is the first American-based prototype team to confirm its entry in the 2023 24 Hours of Le Mans. It’s expected that Team Penske, which raced this year’s Le Mans with a full-time WEC entry in LMP2, also will race Le Mans with Porsche’s new LMDh car that is set for IMSA, but the manufacturer has yet to confirm its driver and team lineup.

Next year will mark the return of Cadillac to Le Mans for the first time since 2002.

It takes a world-class team to conquer the world's greatest racetracks. Meet our drivers for the Cadillac V-LMDh in the 2023 FIA World Endurance Championship Hypercar class. #CadillacRacing #BeIconic #WEC pic.twitter.com/Zk9CC9vyfD

Before joining Ganassi last year, Lynn made 28 WEC starts since 2016, winning the LMGTE Pro class at Le Mans in 2020.

“I’m absolutely thrilled to continue with Cadillac and Chip Ganassi Racing,” Lynn said in a release. “It’s a huge honor to drive for Chip in any capacity but certainly on a full factory sports car program, it’s seriously cool. Cadillac has so much heritage as a luxury North American sports car brand, so to be able to represent them is a huge privilege. I’ve had a lot of fun in my first year doing it and to continue that onto the World Endurance Championship stage is fantastic.

“For me, returning to WEC is sort of what I’ve always known and it’s a bit like going into my wheelhouse. This year in IMSA was a bit different with getting to know all-new circuits and a new style of racing so 2023 will be filled with a bit more of what I’m used to with more of a European focus. I think what’s significant about WEC is without a doubt Le Mans. As a sports car race, Le Mans is the crown jewel and everything that we want to win. To be able to take Chip Ganassi Racing and Cadillac back to Le Mans to fight for overall honors is a huge honor and that’s something that I’m going to work tirelessly to make sure we achieve.”

“I am really happy to continue at Chip Ganassi Racing and Cadillac,” Bamber said in a release. “I’ve loved my first season in DPi and now to continue over into the LMDh era and WEC is super exciting. Looking forward to fighting for a world championship and another Le Mans victory.

“The World Endurance Championships gives us the opportunity to race at the world’s biggest race, which is Le Mans, the crown jewel of sports car racing. I’ve been lucky enough to win it before and it’s obviously a huge goal for Cadillac and everyone at Chip Ganassi Racing. To have that goal in sight is really exciting. It’s been great to have Alex as a teammate in 2022. We’ve been able to learn and grow together in the DPi, and we have a really good partnership going into WEC. We know each other really well and believe adding Richard will be a seamless transition.”

Said Westbrook: “After four really good years at Chip Ganassi Racing, I’ve got so many friends there and I’ve always dreamt to come back one day. It just worked so well between 2016 and 2019, and I’m delighted we found a route to come together again. I can’t wait, it’s an exciting era in sports car racing right now.

“I feel like I know Alex and Earl really well. I did Le Mans with Alex in 2020 and I’ve known him for years. It feels like I’m going back with an ex-teammate and exactly the same with Earl. Although I’ve never shared a car with Earl, we’ve always done the same sort of racing be it in WEC or in IMSA. We’ve had lots of battles, including this year in our dueling Cadillacs. We’ve always gotten along quite well, and I can say we’re going to have a great year together.”

The seven-race WEC season, which also includes a stop at Spa, will begin March 17 with the 1,000 Miles of Sebring at Sebring International Raceway in Florida.