Achieving success in NHRA Pro Stock competition is built one round and 1,320 feet at a time.

But for one budding racer on quarter-miles across the U.S., the distance to success is more like 8,300-plus miles.

That’s how far it is for Shane Tucker, from his native home in Gold Coast, Australia, and his adopted home and the location of his weekday business in Dallas, Texas.

After five years of building a company that specializes in external facades for commercial buildings back in his native land, the 34-year-old Aussie has spent the last five years building a similar business in Texas, while also working on making his mark in American drag racing.

Business here in the states is good. The 34-year-old Tucker now has 50 employees, a fabrication factory and by the end of this year, will make a complete transition where his Australia branch will become solely based in the U.S.

Now, the next big thing on his agenda is to build his Pro Stock program — in its first full season after four previous part-time campaigns — and challenge for the championship. 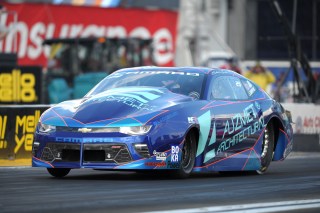 Shane’s father and crew chief, Rob Tucker, is a veteran drag racer in Australia who has enjoyed considerable success behind the wheel down under.

Now the elder Tucker is doing what he can to make his son fast, competitive and potentially turn him into a NHRA champion.

“My dad raced Pro Stock for 40 years in Australia,” Shane Tucker, who won the Australian Junior Drag Racing championship at the age of 16 (his sister Kristen also races competitively), told NBC Sports. “I jumped into a Pro Stock car when I was 19 in 2005 and started my (professional racing) career in Australia.

“A couple of years later, I got picked up by a team in the U.S. here and started doing some development driving here. But unfortunately, the sponsorship never eventuated.”

Tucker then went out on his own and picked up some major sponsors on his home turf including Monster Energy and Milwaukee Tools.

“I had some good success there and in 2013, we figured if we were going to do eight to 10 races a year, we might as well do it here in the U.S., it’s the same amount of money. This is the pinnacle of drag racing in the world and it’s where we want to be.

“Maybe we bit off a little bit more than we could chew, but we’ll chew like hell and maybe come out shining on the other end.”

Admittedly, it’s been a bit of a struggle for Tucker to climb the Pro Stock ranks here in the U.S. In his two most recent races, at Virginia two weeks ago and this past weekend in suburban Chicago, he lost in the first round of eliminations piloting his Auzmet Architectural/StructGlass Racing Chevrolet Camaro. His next race is in two weeks in Bristol, Tennessee.

“The guys race a lot more here and the attention to detail is a little tighter over here,” Tucker said about NHRA competition in the U.S. “You really need to be on your game and every little bit counts.

“But don’t get me wrong, the racing in Australia is very, very tough. But these guys here wear their stuff out week-in and week-out. They do 100 runs before they’ll turn up for the first race. It makes it tough.

“I would say the top 16 are usually separated by a tenth of a second in Pro Stock here. It’s a lot of pressure on a driver but I love that. It all comes down to three deciding factors, either car, motor or driver.”

Tucker is one of several Australian drivers trying to make their mark in the U.S. Others include Top Fuel drivers Richie Crampton (from Adelaide) and Wayne Newby (from Sydney).

Tucker is also a big fan of perhaps the best-known current race car driver from Australia, 2018 Indianapolis 500 winner Will Power, who serves as an inspiration to Tucker.

“I’m a big fan, he’s had a lot of success here in the U.S., and he’s a fellow Aussie,” Tucker said. “I was excited to see him race last week (in the Indianapolis 500). Unfortunately, he didn’t get the win.