FORT WORTH, Texas – As a youngster growing up in the Toronto suburb of Oakville, Ontario, James Hinchcliffe loved his hometown teams: The long-suffering Toronto Maple Leafs of the National Hockey League, the Toronto Blue Jays of Major League Baseball, and a new team that began its existence in 1995.

That would be the Toronto Raptors of the National Basketball Association.

Originally, the NBA was a bit of a novelty in Canada’s largest city, but over time, the Raptors have been built into a NBA power. The Raptors made the NBA Finals for the first time this year and enter Wednesday night’s Game 3 tied at one game apiece against the Golden State Warriors.

The big reason the Raptors have made it to the NBA Finals is small forward Kawhi Leonard. Hinchliffe wants to make sure he stays in Toronto.

“They started this whole campaign at home about keeping Kawhi in town,” Hinchcliffe told NBCSports.com. “There are talks he might be going somewhere. That has always been our big Achilles’ heel as a team. We get these talented players and they only stay for a couple years until they get picked up by a more established club.

“A lot of people are trying to keep Kawhi with the Raps. There are restaurants in Toronto promising free food for life. Free services here, there, wherever.” 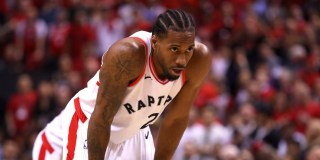 And what is Hinchcliffe offering the NBA All-Star?

“I was going to offer that I’ll put a picture on my helmet and offer him two free passes to any IndyCar race I’m competing in for the rest of my career if he stays put.”

Despite the fact Hinchcliffe spends most of his time in Indianapolis, he remains a loyal Raptors fan.

“Like all Toronto sports, when I moved to Indianapolis, it was so much harder to follow them,” Hinchcliffe said. “I was able to stay in touch with the Raptors when they came to town and played the Indiana Pacers. I have to admit, I have been to more Pacers games the last five years that I have Raptors games – by opportunity, not by choice.

“I’ve always been a huge fan of any Toronto sporting team. I try to keep up with the Jays, the Raps and the Leafs. With the Leafs, we had an OK run this year. But to see what the Raps are doing, as far as NBA franchises go, they are still on the younger side, but to get to our first Finals in history and the way we did it, it’s pretty exciting.”

Hinchcliffe has attended over 25 games in Toronto. His first Raptors game was with his father when he was quite young.

“I remember when the team first came to Toronto – there was a public poll what to name them and the Raptors was one of the names,” Hinchcliffe said. “That was the name I really wanted. Jurassic Park had just come out and I was a big dinosaur geek when I was a kid. I was very happy when they settled on Raptors.”

The Raptors were one of two NBA squads that arrived in Canada in 1995. Six years later, the Vancouver Grizzlies moved to Memphis, Tennessee, leaving the Raptors as “Canada’s team.”

But with the Raptors’ success this year, the entire country finally seems to have embraced them as such. 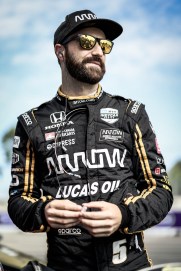 “The challenge with basketball back home is we have just the one team,” Hinchcliffe said. “College sports don’t exist on the level they do in the States. If the Pacers left Indianapolis, basketball fans would follow Indiana University, Purdue, Butler – there would still be a big basketball contingent.

“In Canada, we have one baseball team and one basketball team for the entire country. It’s not like hockey. But when a team goes on a streak and a run of success like this, there is no doubt it piques interest from coast to coast.”

Still, while ‘Raptors fever’ is in the air, hockey – and the Leafs – are never far from Hinchcliffe’s mind. He’s among many fans of the Blue and White that have dealt with one heartbreak after another.

But he hasn’t given up hope.

“I still have 20 years less suffering than some other diehards because I wasn’t born the last time they won it,” Hinchcliffe said. “We are all very much behind the club. No matter what level we are playing at, Toronto has never had bandwagon fans when it comes to hockey.

“They have always been diehards.”