FORT WORTH, Texas – The last time the NTT IndyCar Series competed in a race in “The Republic,” Will Power was in charge at Circuit of the Americas (COTA) near Austin, Texas. He led 45 laps in the March 24 INDYCAR Classic with Alexander Rossi his only serious challenger.

But a near-certain victory turned into a unfortunate series of events. Power was preparing to make his final pit stop of the race, before James Hinchcliffe and Patricio O’Ward collided into each other in Turn 20 on Lap 44.

Practically every other car in the race except Power and Rossi had already pitted. Once Power came into the pits, his doom was sealed when a drive-shaft failed on his No. 12 Verizon Chevrolet.

As for Rossi, he got booted all the way back to 15th place. After the race went back green with 10 laps left, he raced his way back to ninth.

Power returns to Texas for Saturday night’s DXC Technology 600 at Texas Motor Speedway. He hopes for a much better time, as he told NBCSports.com that the trouble at COTA is why he’s not in the thick of the battle for the 2019 NTT IndyCar Series championship.

“Everyone has that in the year, it’s the other results in between.”

Power’s results “in between” include 11th at Barber; seventh at both Long Beach and the Indianapolis Motor Speedway road course; fifth in the Indianapolis 500, and a Detroit doubleheader showing of 18th in Race 1 and third in Race 2.

Add it all up and Power is sixth in the standings, 84 points behind leader and Team Penske teammate Josef Newgarden.

But the third-place finish last Sunday in Detroit did help Power stem the tide to a season where he’s been held winless.

“It was massively important, honestly,” Power said. “We needed that result. I think we would have had that result the day before. It has actually been a consistent season with a lot of fifths, sevenths, a couple of podiums. If it wasn’t for that Detroit result on Saturday, we would have been looking pretty good.”

Power entered the “Month of May” at Indianapolis as the defending Indy 500 winner. That victory in 2018 was the crowning achievement of his career, which also includes the 2014 NTT IndyCar Series championship.

This May, however, Power was shuffled out of the storyline, although his fifth-place finish was a positive achievement. 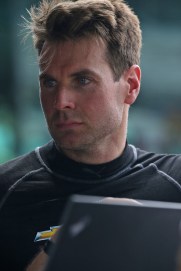 “If you go there with a team like Penske, anything but a win is disappointing,” Power admitted. “I rue that mistake I made in the pits on my second stop. If I had known the penalty was a drive-through and you go 30 cars back, I would have never taken that risk and pushed it a little bit at the end. The back came out and brushed my fueler. It’s such a tough penalty.

“A lot of comebacks this year have kept me in the game where otherwise we would be down and out.”

Power was fifth-fastest (217.196 mph) in Thursday night’s rain-abbreviated practice session at TMS, which was topped by Detroit Race 2 winner Scott Dixon (219.308 mph) in his No. 9 PNC Bank Honda.

“I think it’s good because it gives you a chance to really see the true condition it will be in the race that we haven’t had before,” Power said before the rain. “It’s going to be good to see which drivers after the practice want more downforce.

“It’s usually the guys that are struggling that want more downforce.”

“It’s been a very different race every year,” Power said. “I expect that again this year with a different tire. The track will have degraded a bit. Everyone improves over the offseason and it will be difficult to tell how it plays out. 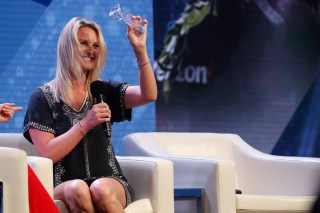 “I’m looking forward to racing there and enjoying it.

“I think Firestone will fix the blistering problem and the tire will wear and degrade. That creates some good strategy and racing.

Although Power is from Toowoomba, Australia, his wife, Liz, is from Plano, Texas – a suburb of Dallas.

It’s a big weekend for his wife’s family as Liz’s grandmother, Ann Sconyers, celebrates her 98th birthday with a party on Friday.

“I didn’t even know her name,” Power admitted. “I just know her as ‘Grandma.’”