FORT WORTH, Texas – Teams in the NTT IndyCar Series, along with Firestone and INDYCAR, were hoping to use Thursday’s 2-hour practice session at Texas Motor Speedway to see if blistering would become an issue with the Firestone tires.

But a torrential rainstorm halted the session after just 41 minutes – probably not enough time to determine if the optional tire compound should be used over the primary compound Firestone has prepared for Saturday night’s DXC Technology 600 at the 1.5-mile Texas Motor Speedway.

Several cars had tire rubber chunk off the tires in last year’s race. That is known as “blistering” and can be potentially hazardous in high-speed racing. That is why Firestone has brought two different tire compounds for this race.

The only way the optional tires would be used was if the primary compound showed signs of widespread blistering across the field of race cars. 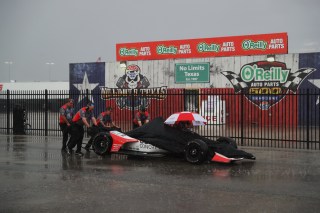 “I think there were some blistered sets out there, I’m not sure how they’re going to address that,” former Texas winner Scott Dixon said after he was the fastest driver in Thursday’s practice. “I know there was an option tire, but I haven’t heard. I think from what I heard; they are kind of happy with what they saw. Again, it’s early days, right? They’ll probably go through everybody’s tires tonight and figure out a plan for tomorrow.

“Conditions were kind of ideal. I think today as far as Texas goes; it actually wasn’t even really that hot. Running this late in the day, the track temp was down almost a hundred degrees, which is very low.”

Dixon was asked what he would like to see done with the tires and he quipped, “We’d like a tire that works really well with the 9 car” referring to his PNC Bank Honda.

“We had zero issues with blistering last year, yet there seemed to be a few teams that had some major issues and were falling off pretty hard,” Dixon said. “I feel like in that scenario, you should be able to adapt to it. You shouldn’t have to change it for the situation of maybe a few cars or few drivers.

“But Firestone are always trying to make the tire better. I think for us this year, the problem is, once you have a new surface and a new track, the falloff comes pretty quickly in the first two, three, four years. That’s what we’ve seen.

“The grip is a lot lower than what we saw last year. IndyCar reacted with adding downforce on that. I think that’s the right direction.

“The end of the race last year I thought was quite good. I think for the drivers, we want to have a car that’s difficult to drive, something that you can make a difference. The last thing I want to see is pack racing. It’s easy for everybody, jut creates issues. Maybe the person that takes the biggest risk, if they pull it off, is going to be rewarded.

“I think a balance of what we had last year and maybe a bit closer would be good.”

“We had the test here, the tire test in March, and I think that just helps a lot of us kind of roll off,” Dixon said afterwards. “We had a few issues I think with balance. I think a lot of people have just with the added temperature, especially from when we tested here. That was interesting for us.

“Unfortunately we got the weather. We didn’t really get to run as much as we would have liked. Hopefully they can add some additional time tomorrow. All in all, the Penske car feels good out of the gate.” 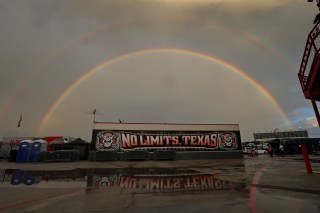 INDYCAR announced an additional 15 minutes of practice time to Friday’s schedule so that teams can “scuff” in sets of tires for the race.

Takuma Sato of Japan was second at 219.262 mph in the No. 30 Honda for Rahal Letterman Lanigan Racing.

“I think it’s a bit early to say for the tires and downforce and stuff,” Sato said. “I don’t know if Scott told, but we had only few laps, to be honest. Even one set of tires, did not even get through, I don’t know, half of the stint I wouldn’t think.

“I was obviously looking forward to a little bit more traffic runs, go through the stint, how the balance shift will be. But obviously the rain, we cannot do anything at the moment.”

Sato’s teammate, Graham Rahal, was third at 218.311 mph in a Honda followed by Charlie Kimball of Carlin at 217.503 mph in a Chevrolet. Will Power rounded out the top five at 217.196 mph in the Team Verizon Chevrolet for Team Penske.