FORT WORTH, Texas – Since 1997, Texas Motor Speedway has been an important stop on the NTT IndyCar Series schedule. It provided the upstart Indy Racing League with a solid anchor for a second home outside of the Indianapolis 500.

That first race drew an announced crowd of 129,000 fans, who were thrilled at the sight of IndyCar’s first modern-day night race, under the lights in spectacular conditions.

When the 1.5-mile track opened, it was a racing palace and fans in Texas had a huge appetite for racing. Big crowds continued to watch, up through the rise of Danica Patrick and “DanicaMania” in 2005. 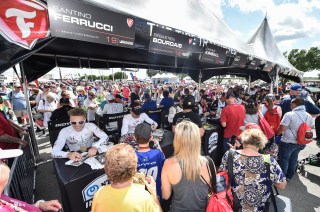 IndyCar racing at Texas has changed over the years. Initially, pack racing dominated as high-downforce setups allowed large groups of cars to race in tight formation. It thrilled the spectators but led to an outcry from drivers and team owners believing it was too hazardous and too costly when their cars were destroyed in crashes.

In 2012, IndyCar drastically changed the aerodynamic package for high-speed ovals. The result at Texas was a race that saw the field get spread out like an accordion.

But these races would still create dramatic outcomes. In 2012, the late Justin Wilson won the race after leader Graham Rahal brushed the Turn 4 wall heading to the white flag. In 2014, Ed Carpenter – a proponent of the previous Texas pack racing – nipped Will Power by .525 seconds.

Scott Dixon won a snoozer in 2015, defeating Tony Kanaan by almost eight seconds in a race that had just one caution for 13 laps and a strung-out field.

But the thrill returned in 2016 when Graham Rahal edged James Hinchcliffe at the start finish line by just .008 seconds in one of the closest finishes in IndyCar history.

The track was then repaved in 2017, and the new surface created much more grip. It created a return of the packs and ultimately led to Will Power winning under caution. That night, the yellow flew nine times for a whopping 66 laps.

Another change to the aero package and tires followed for 2018, which saw Dixon win in another runaway – this time, defeating Simon Pagenaud by over four seconds.

It remains to be seen what style of racing will take place in tonight’s DXC Technology 600, but a win at Texas remains a very important victory to any driver in the NTT IndyCar Series.

It comes at a track that is steeped in IndyCar history and heritage, and it rewards a driver that is able to master the art of high-speed racing on a high-banked oval. 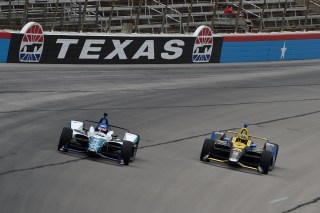 The drivers remain split in what style of racing they prefer: Some would like to see closer racing, while others want to avoid the pack at all costs.

As noted earlier, Carpenter is one of the few drivers that wants to see a return to pack racing.

“I thought that was very exciting,” Carpenter told NBCSports.com Friday.

Others don’t believe it’s worth the risk.

“I think last year’s race was pretty good. You had a few cars that were battling. Maybe it could be a teeny bit tighter. Will believes, with this tire, it might be getting closer to the field being able to go flat out, and that would tighten the field.

“If the racing becomes tighter, the drivers have less ability to manage the wear on the tire. I don’t think they will be able to manage that very well.”

And then, there are others who would like a mix in-between the two.

“I’m somewhere between the pack racing and spread out,” Ryan Hunter-Reay said. “I would like to have this race come down to some handling (on the car).

“Oval racing has its challenges right now to attract fans. I love oval racing. It’s one of my favorite forms of racing.”

Firestone has tried to bring a tire to Texas that will wear over the course of a run, allowing more passing opportunities for drivers with fresher tires. In past Texas races, tires have blistered – losing chunks of rubber and leading to ill-handling race cars – because of the extreme conditions on this track with heat and grip.

“New tires still have an advantage, but we will have degradation, too,” pole winner Takuma Sato said. “I think it’s going to be a very good race. If everybody is on the new tire, the first 15-20 laps, everybody will be in a pack. After that, you will see the degradation and it will spread out.

“It shouldn’t be pack racing. Drawing the line is very difficult. At least, allow us to go two-wide through Turns 3 and 4 and that should allow us to have a good race.”

Team owner Dale Coyne believes the tires are much better than what they had last year.

“Each car was able to run 40 laps Thursday night and we could never run 40 laps with the old tire we had here before,” he said. “Winning here is still big. Justin Wilson said if he couldn’t win Indy, he wanted to win here because it proves how good a driver can be on an oval.