FORT WORTH, Texas – One of the most determined and aggressive drivers in the NTT IndyCar Series, Alexander Rossi doesn’t like finishing in second place. But in three of the last four races, Rossi has finished second, all three times to drivers from Team Penske.

It began in the 103rdIndianapolis 500 when he was locked in an incredible duel with Simon Pagenaud over the final 14 laps of the race. He made what seemed the race-winning pass going into Turn 1 with two laps to go, but by the time the two drivers made it to Turn 3 at the Indianapolis Motor Speedway, Pagenaud made the race-winning pass going into that corner.

In the closing laps of Saturday night’s DXC Technology at Texas Motor Speedway, Newgarden used a brilliant pit strategy by pitting under yellow on his next-to-last stop to top off with fuel and get on fresh Firestone tires. Despite losing track position, Newgarden was able to run 8-10 mph faster than any driver on the track, and that allowed him to be in position for a short pit stop on his final stop.

The team short-filled Newgarden’s Chevrolet, and by the time the final round of pit stops cycled through, Newgarden was in the lead on Lap 203 of the 248-lap race.

In order to get to the checkered flag first, however, he would need to fend off a challenge from Rossi’s Honda.

Several times, Rossi tried to go to the outside of Newgarden’s Chevrolet entering Turn 1. Each time, Rossi had to back off because the outside lane was too slippery to complete the pass. 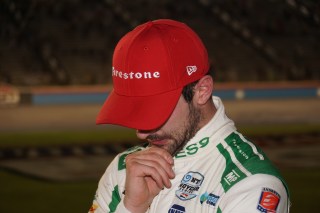 As Newgarden celebrated, Rossi somberly explained the end of the race.

“The second lane never came in,” Rossi said. “It’s disappointing because, he was really nowhere all night. They called a great race and he had a fast car. Once he got track position, there wasn’t much I could do. I could get halfway around him in Turn 1, but then the front of the car would take off and I couldn’t complete the pass.

“He drove it as he should. He covered the outside and there wasn’t much I could do. It was close in the Colton Herta-Scott Dixon incident (crash on Lap 229) and I was lucky to get through that. Going down to the apron at high speed is always sketchy. Luck was on our side today, we were able to come through and get second-place, but it’s still disappointing. Without that yellow, Scott Dixon and I were looking good on fuel.

“We learned one thing from last year – you have to keep collecting points and eventually we will get there. But what is disappointing is the guy we are chasing in the championship is the one that came out on top.”

Rossi believes his No. 27 Honda worked best when he was able to get a run on Newgarden off Turns 3 and 4. But the racing groove in Turn 1 where a driver could make his car stick was about a lane-and-a-half.

“I tried it like six times, and it never worked, so I doubt it would have worked if I tried another three or four times,” Rossi said. “Maybe I could have taken a bit more of risk, but it was pretty low percentage. I didn’t think a lot of guys were making it happen. Ultimately then it became about trying to beat him for the line. But we took out a lot of the tire life going in lane two there, so we just didn’t have the rear tires there at the end to stay close to him. 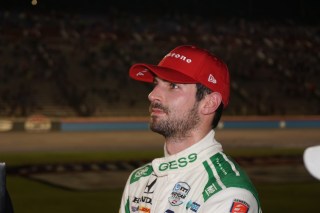 “That sucks. I didn’t see him up front all day. All of a sudden, he appears in P1, so… Obviously they’re doing a good job. He had a fast car once he got in front.”

Rossi has been in prime position to win three of the last four races. Instead, he has been beaten each time by a driver from Team Penske – once to Pagenaud and twice to Newgarden.

“When you have a Penske Chevrolet driven by someone as good as Josef, there’s only so much you can do, right?” Rossi responded. “Yeah, it sucks.

“We’re always there, but we’re always playing the bridesmaid as of late.”