FORT WORTH, Texas – Santino Ferrucci is quickly shedding the negative baggage of an incident in F2 last year and becoming one of the many positive stories in the NTT IndyCar Series in 2019.

When Ferrucci arrived in IndyCar last year to drive in four races as a replacement for injured driver Pietro Fittipaldi, he was considered one of North America’s most promising international drivers.

But last July, Ferrucci was banned from four F2 races (Hungary and Belgium) after making deliberate contact with his teammate Arjun Maini after the Sprint Race at Silverstone on the weekend of the British Grand Prix.

He was also disqualified from the Sprint Race results at Silverstone for a separate incident when he deliberately forced Maini off the track, and was found to have driven his car from the support race paddock to the race pit lane wearing just one glove while operating his cellular telephone, earning him a €60,000 fine.

On July 18, Ferrucci was fired by the Trident F2 team, citing behavioral issues, and non-payment of money required by contract. Trident alleged that money had been used to pay for his ride with Dale Coyne Racing for the Detroit IndyCar race.

Needless to say, when the native of Woodbury, Connecticut, arrived in the NTT IndyCar Series paddock, his reputation was a bit sullied.

His four races were unimpressive, at best with finishes of 22nd and 20th in the Chevrolet Detroit Grand Prix doubleheader and 20th at Portland.

But in the season’s final race at Sonoma Raceway, Ferrucci showed why he is considered a top racing prospect when he started 20th and finished 11thd.

Team owner Dale Coyne saw plenty of promise in the young driver and agreed to put him in the team’s No. 18 Honda for the full season. His teammate is proven veteran Sebastien Bourdais, the only driver to win four straight Champ Car Series championships from 2004-2007.

Ferrucci just turned 21 on May 31 and has shown impressive speed in the NTT IndyCar Series. He won the Indianapolis 500 Rookie of the Year Award with his seventh-place finish. 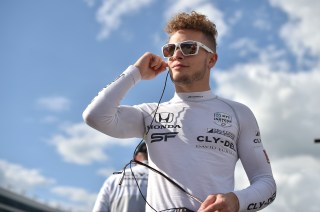 Saturday night in the DXC Technology 600 at Texas Motor Speedway, Ferrucci had the best race of his short career, starting 18thand racing his way to an impressive fourth-place finish on the high-banked oval.

“I can’t thank my crew enough,” Ferrucci said. “We had a stellar crew in the pits, they did fantastic stops, and we just made our way to the front while avoiding a couple of incidents in front of us. I can’t thank my spotter Pancho (Carter) enough to get me to push my limits in the car, coaching me throughout the race.

“To bring home a top five with our Cly-Del Manufacturing Honda, my first one in the NTT IndyCar Series, feels pretty good.”

Ferrucci was expected to be better on the street and road courses than on the ovals, but his two best races of the season have come on ovals including the Indianapolis 500 and the DXC Technology 600.

“For someone who had no experience on ovals, I’m starting to say I love them,” Ferrucci said. “I’m happy with a fourth place. After Indy, knowing what kind of car we had, how hard our crew has been working and how much power we have from Honda as well, I knew we could do something special here, regardless of what happened in qualifying, and we did.”

Ferrucci has moved into ninth-place in the NTT IndyCar Series standings after nine races. He is one position ahead of his much more acclaimed teammate, Sebastien Bourdais, who also had a top-10 finish.

“We finished eighth and got some good championship points, but obviously, we were hoping for a lot better,” Bourdais said. “The No. 18 SealMaster Honda was good. I think we had a top-five car. The guys did a good job with the pit stops. We had a strategy that could have worked, but the yellows worked against us.

“Honestly, I am not really sure what happened. We’ll just have to sit down and take a look at the race and get it figured out.”

Bourdais represents a great era of race drivers in the 2000s, but Ferrucci along with other young drivers such as Colton Herta, Marcus Ericsson and Felix Rosenqvist represents IndyCar’s future.

The outlook calls for a pretty bright future for this group.