ELKHART LAKE, Wisconsin – There are several drivers in the NTT IndyCar Series whose skill sets seem to be a perfect match for the mammoth race course at Road America. Josef Newgarden is one of those drivers.

In the three years since IndyCar’s return to the 4.014-mile, 14-turn road course located in this lakeside resort region of Wisconsin, Newgarden has been a central part of the storyline.

In 2016, when he was driving for Ed Carpenter Racing, Newgarden was involved in a massive crash at Texas Motor Speedway with Conor Daly, suffering a broken hand and a broken clavicle. He had JR Hildebrand on standby to drive his car at Road America on Friday, but after he was cleared to return to the cockpit, Newgarden began his comeback on Saturday.

He was on a fast lap in his qualification group, but went into the Carousel portion of the course too fast and ended up qualifying 20th. Despite his injuries, Newgarden battled back to an eighth-place finish.

In 2017, his first season with Team Penske and a year when he would go on to win the NTT IndyCar Series championship, Newgarden started third and led 13 laps.

That was before a shootout with leading challenger Scott Dixon on a Lap 31 restart. Dixon hit the throttle at the green flag, raced Newgarden down the long front straight, and dove to the inside of Turn 1 to make what proved to be the race-winning pass.

Newgarden and Team Penske learned a valuable lesson, and made sure it wouldn’t happen again in 2018. Newgarden won the pole and led 53 laps in the 55-lap contest before fending off a strong challenge from Andretti Autosport’s Ryan Hunter-Reay to win the race.

Newgarden returns as the NTT IndyCar Series points leader and kicks off the second half of the season in the REV Group Grand Prix at Road America (Sunday, Noon ET on NBC). 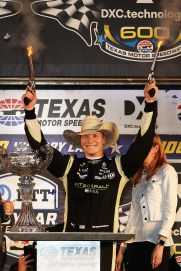 He comes off his third win of the season on June 8 at the 1.5-mile Texas Motor Speedway. Road America, one of the classic road courses in the world, delivers a vastly different style of racing. But it does help to have some momentum on your side.

“Yes. I think we’ve had good momentum throughout the year,” Newgarden told NBCSports.com. “We’ve had some bobbles that can shake that, but we’ve been good at not letting a bobble shake our confidence. I feel really good about where we are at. This win at Texas was a good time to have it with everyone going into the break feeling pretty good about things and having a weekend off.

“We just need to pick back up now. We can’t slow down. It’s the second-half push for the championship. We have to stay on it now to the finish.”

There are nine races completed in the 2019 NTT IndyCar Series season, which leaves eight races remaining in the fight for the title. Newgarden has a 25-point lead over Alexander Rossi of Andretti Autosport and a 48-point lead over Team Penske teammate and Indianapolis 500 winner Simon Pagenaud.

The second half begins in the “Land of Bratwurst,” just a few miles from Johnsonville, Wisconsin, and at a track that thoroughly earns the reputation as “America’s National Park of Speed.”

“I’m a big fan of Road America,” Newgarden said. “It’s one of our last ‘old school’ tracks in the world. It’s an ultimate IndyCar track. It has a little bit of everything. It’s tantalizing. If you make a mistake around Road America it penalizes you. I think drivers like that. You don’t want it easy. You don’t want a ton of runoff. It has great high-speed sections. Very classic corners. It’s very high commitment brake zones, quick, long straights so an Indy car can open its legs up a lot. It’s really what you think of when you go to a high-speed, IndyCar road course. And, it’s a beautiful backdrop. Elkhart Lake is a gorgeous part of the country, especially in the summer time when we go there.

“It’s a classic facility. One of my favorite tracks in the world.” 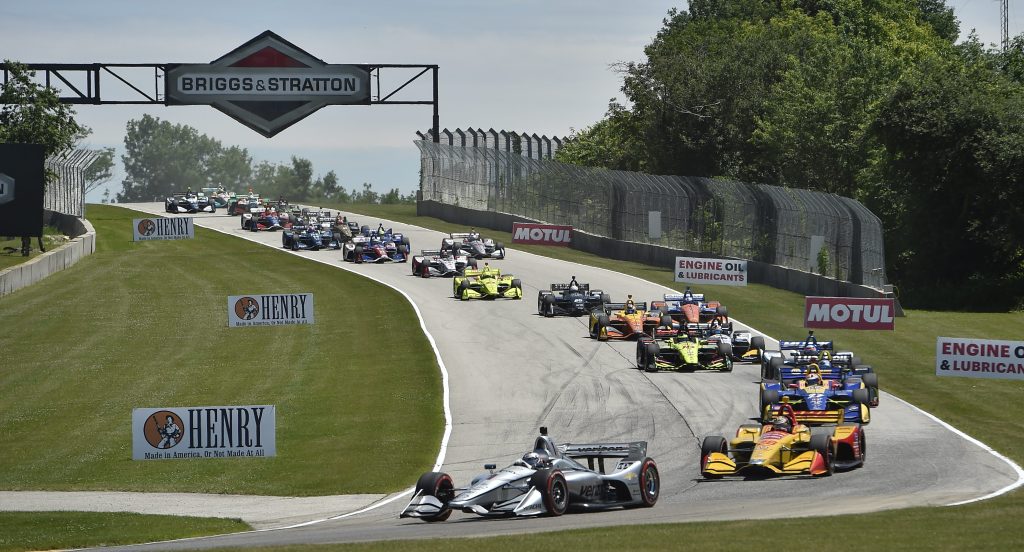 Newgarden also has high-praise for the Wisconsin race fans, who come out in the tens of thousands and start camping on Thursday and stay through the end of Sunday’s race, which regularly draws over 50,000 fans.

“There is tremendous support there,” Newgarden said. “The place seems full on race day. It adds to the ambience of the track. It’s pretty, even when nobody is there, but when you feel it up with all the people and the campers, it takes it to a different level. They really do come out and support it. They are very knowledgeable people to our series and what is going on. I think the drivers appreciate that. They know what is going on all year.”

From a driver’s standpoint, this race is fairly straightforward, strategy-wise. According to Newgarden, the variance of strategy depends on who can go the longest on one tank of fuel. The normal fuel window is between Laps 11-15. If a driver dives into the pits early, then he’s committed to racing as hard as possible to build up a gap on the field in order to get in and out of the pits before the other drivers on a normal pit stop strategy.

“Fuel matters there and the longer you can run on a stint, it seems to help you. That is where you see the strategy difference,” Newgarden explained. “Overall, the general layout of pit stops is pretty straightforward in that race. Unless an oddball yellow comes out, if you are running out front, that is the strategy you can going to run.

“We have conversations before the race what we are trying to do. There are different points where you need to be pushing and are flat-out and not worried about fuel and other points where you need to be saving as much as you can. There is always a fine-line. You are generally always trying to save some fuel by going as fast as possible, which is a very conflicting thought process, but that’s what we are always trying to do.

“It really depends on how the race flows. At Road America, when the yellows fall, that will dictate what we are doing, and I will get feedback from the pit. It’s all relative. It depends on whether I’m in the front or in the back. If I’m up front and the yellow falls at a weird time, they will let me know what other people are doing and if that changes our game. If it does, then I will adjust what I’m doing.

“It’s always a moving target, but you try to plan this stuff out. If it’s a green race all the way through, here is the plan and if the yellows fly, then this is what we are going to do. We try to plan all of that out before the race starts and stuff starts happening, you know how to react.”

Newgarden has learned from his mistakes at Road America and that is one reason why he is once again a major threat to win this race. Despite his broken hand and broken clavicle in 2016, his eighth-place finish was in many ways a victory.

“It was a very good weekend in a lot of ways,” Newgarden recalled. “Just getting back out on the track and not lose ground in the championship as very important to me. I was very satisfied we were able to do that. It took a lot of support and help, and everyone pitched in to get it done. I was a little bit disappointed. I think we had a much faster car than eighth place in 2016. I made a mistake in qualifying. I pushed wide in the Carousel and it put us 20th. We could have probably started in the top five in that race and had a shot at the podium and maybe a win there. If anything, I was disappointed at where we qualified and where there that put us.

“But it was a great recovery. It was a great weekend overall. Getting a top-10 was really a win in a lot of ways. I think there was more to be had that weekend, though.”

In 2017, he was ready to challenge for the victory, but was a victim of bad timing.

“We got nipped by that yellow at the wrong point,” Newgarden explained. “We were on the wrong tire. Right as we came out of the pits on the Black tires, Scott came out on new Reds. It was a yellow when we didn’t need it. To get the tires up to temperature for the restart was really our challenge in that race. Ultimately, it did us in, in Turn 1. We didn’t get a great launch off the final corner, Scott dragged alongside and completely the pass in Turn 1.

“We didn’t make that mistake last year, tire-wise, when the yellow came out at the end of the race and had a shootout.” 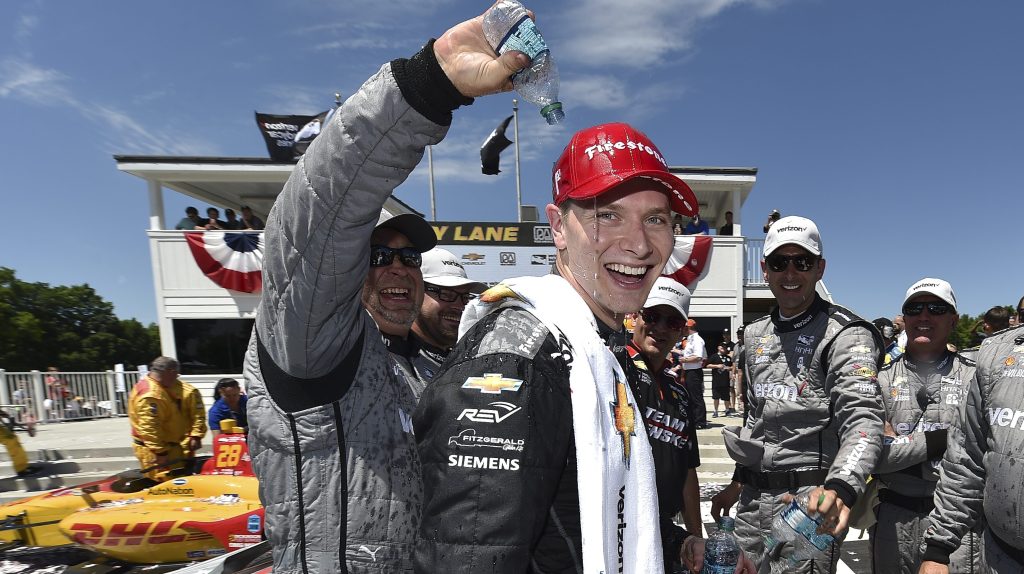 His win last year gave off the image of having the field under his control. But the driver pointed out it wasn’t as easy as it looked.

“That was actually a very tough drive,” Newgarden recalled. “I wish that drive was a lot easier than it was, but it was very difficult to keep Ryan Hunter-Reay behind us last year. He was really the guy hounding us the whole race and had a lot of pace, probably more pace than us in different parts of that race. Trying to keep him at bay and doing what we needed to do to get in the right window, it was not an easy drive. If it was an easy drive, we would have sprinted off into the distance a little more. We really had to work hard to hit our windows and make sure Ryan stayed behind us.

“It was a tough day; it was a long day. We had to do a lot or work to run that whole race. We had a very consistent race car. It was very predictable and easy to drive. I had the speed and the car underneath me so that I could manage the situation.”

The ability to manage the situation is a great quality to have for any driver in the NTT IndyCar Series. In Newgarden’s case, it may be the key ingredient to winning a second IndyCar championship.