ELKHART LAKE, Wisconsin – At home, Colton Herta is a typical 19-year-old kid who lives in his parent’s basement, plays video games on his TV and computer and often gets fussed at for not cleaning up his room by his mother. Sometimes, his buddies come over to play Fortnight, Rainbow Six Siege and Apex Legends on the computer or just hang out.

On the weekends, though, Herta is anything but a typical 19-year-old.

He is one of the top young drivers that has entered the NTT IndyCar Series in years. The son of four-time IndyCar Series race winner Bryan Herta scored a victory in just the second race of his rookie season when he won the INDYCAR Classic at Circuit of the Americas (COTA) on March 24. That was just a week short of his 19thbirthday making him the youngest winner in IndyCar history.

Since that historic win, Herta was one of the fastest drivers during the “Month of May” at the 103rdIndianapolis 500, qualifying fifth on the grid. He had gearbox failure at the start of the race and finished 33rdafter completing just three laps.

He continued his stretch of decent qualification results with a fifth-place and fourth-place in the two races at Detroit, before dropping back to 10thtwo weeks ago at Texas Motor Speedway.

Young Herta put on an incredible charge to the front in the DXC Technology 600 and was set to pass Scott Dixon for second place with just 19 laps left in the race when the two cars made contact in Turn 3. Both cars crashed and instead of battling for the win, Herta finished 18thand got a bit of a lecture from Dixon, a five-time champion who is considered to be the “Voice of the IndyCar Garage” because of his unquestioned respect.

“We talked to each other and all I wanted was advice on what he thought happened and what he would have done in my position,” Herta told NBC Sports.com Friday morning at Road America as he prepares for Sunday’s REV Group Grand Prix. “It was a bit of a shock to me what happened, but it was nice for me to talk about it and what he felt.

“He was perfect. He wasn’t a Dick in any way. It’s easy in his position to be that way where he could be a D-Bag. He is very powerful in the series. He has a lot of following, a five-time champion and most successful modern-day driver.

“But that’s not what he’s like. He took the time to talk to me. He didn’t have to, but he did and I respect that.” 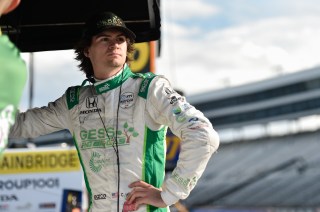 Herta is doing all of this at an age where the typical “Post-Millennial” has yet to decide what they want to do for the rest of the lives. He often has to stop back and say to himself, ‘Wow, this is pretty cool.”

“Not even my age, but to be a professional race car driver and this is the way you earn a living, it’s pretty cool,” Herta said. “Even though it’s frustrating and you try to do the best you can, I sometimes step back after a frustrating day and say, ‘This is what I get to do. I’m pretty lucky.’”

Herta, like many his age, don’t have any plans on getting his own place any time soon.

“The basement is my home,” Herta said. “I don’t plan on moving anywhere any time soon because I want to live in California and it’s quite expensive.

“Once I get home, it’s worth it. Honestly, it’s really nice living at home. A lot of older people would like to live at home. My Mom makes my meals for me every night and it’s perfect. I’ve tried to get her to do my laundry, but she doesn’t. Sometimes, she will yell at me for not cleaning up my room.”

Herta isn’t a late-night teenager because he starts his workout at 6 a.m.

“I’m like an old person already,” Herta said. “Early to bed, early to rise. I love video games, though and that sometimes hampers the sleeping schedule because I will stay up until midnight playing video games.

“A lot of my friends like to play golf and now that college is out for the summer, a lot of them come over at night. A lot of college kids don’t have a lot of discipline, but if you love what you are doing, it’s really easy to be disciplined to get to do the job that you love doing.”

Because Herta is now an NTT IndyCar Series rookie, he has to look at his fellow drivers as competitors and not heroes. But growing up, Herta’s heroes on the track included his dad, the late Dan Wheldon and Dario Franchitti. 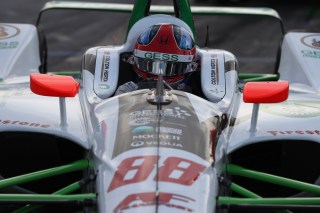 “They were spectacular in that era,” Herta said. “They dominated for a stretch of time, too. They were also the fastest guys and the ones winning the most, as well.”

Herta is rapidly becoming a hero to a younger group of IndyCar fans, including some who would probably not pay any attention to the sport of auto racing unless a driver from their age group was competing for race wins.

He is hopeful of giving that crowd something to cheer about in Sunday’s 55-lap race at the 4.014-mile, 14-turn Road America race course.

“We’re still competing and we’re still fast wherever we go,” Herta said. “It is important to understand all of the disciplines and get up to speed as quick as possible and go from there.

“This track is very similar to COTA, which is a track where we have won at. Hopefully, the same thing can happen here.”