Andretti indicated it all depends on renewing NAPA as the team’s sponsor for the No. 27 Honda.

“We are working hard,” Andretti told NBC Sports.com Friday afternoon at Road America, site of Sunday’s REV Group Grand Prix. “He wants to be here. We want him here. We just have to put the package to together. We are working day and night to make it happen.

“NAPA has told me they are happy with the team and with Alex and believe we have been a great value for them with sponsorship. But whenever we ask them if they are ready to renew, they are still talking about it.”

Because Rossi’s contract expires at the end of this season, he is the biggest star available for other teams to acquire. A heavy contender for Rossi is believed to be Team Penske, but Andretti believes the entire IndyCar paddock has interest in Rossi for 2020.

Other top teams that have shown interest in Rossi include Chip Ganassi Racing and Arrow Schmidt Peterson Motorsports, both Honda teams. Team Penske is a Chevrolet team.

“Technically, he can talk about the contract with anybody, but I’m sure Roger has contacted him and probably everybody in the paddock has given him a call,” Andretti said. “When you are a good talent, people are going to be after you.

“The good news is we all want to stay together, so we have to find a way to make that happen.”

Andretti is more confident he can re-sign Rossi than he was in 2017, the last time Rossi’s contract was up for renewal. At that time, Andretti was considering switching to Chevrolet, but Rossi was so determined to stay with Honda, he had a preliminary arrangement to join what is now Arrow Schmidt Peterson Motorsports.

Once Andretti decided to stay with Honda, Rossi quickly re-signed with Andretti Autosport.

“All sides are working very hard to make it happen,” Andretti said. “If everybody is on the same page, one way or another, we’ll figure it out.”

Rossi was asked if he is already getting tired of media reports about where he will race next season.

“Yes,” Rossi told NBC Sports.com. “I just focus on what we are doing. The way the schedule works, you don’t have time for down days. It’s spent shutting down one event and moving on to the next event. As a whole team, we are focused on our job. We said at the beginning of the year, we have to win this championship. 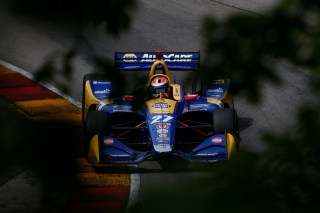 Rossi looks at where this team started and how it has grown together and believes it’s a special part of his career. When Rossi came to Andretti Autosport as a rookie in 2016, he had some acclaim as the lone American driver in Formula One, but at Manor Racing, he never had a chance to show his true ability.

The team and Rossi have developed together.

“It’s been very cool for me to be part of the team’s resurgence,” Rossi said. “They were the team to beat for a really long time. They have always been strong at Indy, but when the aero kits came in 2015, the team had lost competitiveness. When I joined in 2016, there were events where in our view, we were one of the worst teams on the grid.

“To see the improvement every single year and come back to a championship level team has been really cool to witness. I love being part of this organization with Michael Andretti and JF Thormann and Rob Edwards, it’s pretty cool to see what they have done to make sure Andretti Autosport is back at the front of the series.”

“The only relationships I know in this series are Andretti Autosport and Honda,” Rossi said. “Honda has been a great partner of ours. I see where they were in 2016 and what they did last year winning the manufacturers championship for the first time since 2011 and a driver’s championship.

“We are focused on giving that to them again this year.”