ELKHART LAKE, Wisc. – Alexander Rossi is a fierce competitor who hates to lose. It doesn’t matter if he finishes second or 22nd, to the driver of the No. 27 NAPA Auto Parts Honda in the NTT IndyCar Series, anything short of a checkered flag is not a reason to smile or celebrate.

His non-winning demeanor is similar to that of NASCAR’s Kyle Busch, according to those who really don’t know the competitive fire that burns inside of Rossi’s character.

Rossi takes that as a compliment.

“I love Kyle Busch,” Rossi told NBCSports.com. “He’s one of my favorite drivers, so that’s fine.

“I don’t care. These guys, the 27 team, they don’t show up at the workshop at 7 a.m. to finish second. We are all here to win, and that is what we expect from ourselves, and that is what we demand from each other. We’ll celebrate at the end of the year if we come out on top.

“We are not here to finish second. If people have a problem with that, that’s too bad. If you look at the sports team, nobody on the Golden State Warriors is happy finishing second in the NBA. That’s a really silly thing for somebody to say.”

That broke the previous record of 20 years, 90 days when Graham Rahal won the pole at St. Petersburg, Florida in 2009.

Rossi has a chance to break out of his second-place blues in Sunday’s REV Group Grand Prix at Road America.

With its very long straightaways and its variety of turns, Road America has all the makings of being an “Alexander Rossi type of track.” 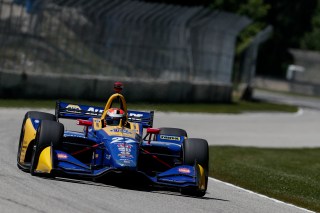 “We had a mechanical failure last year that was independent of anything that happened in the race,” Rossi said. “We qualified fourth and were the fastest in the first two rounds of qualifying. The pace has been there. We’ve had some misfortune here. Some self-inflicted and some bad luck. But on paper, this should really be good for this team.

“We have taken a step forward this year but so has our competition. It’s a track we’ve had circled as one to be focused on because in our three years here, we’ve never come away with a top 10 here.”

Road America is a classic road course but share some similarities to another lavish road course in North America – the beautiful Circuit of the Americas (COTA) near Austin, Texas.

“It’s a high-speed, long permanent road course,” Ross said. “The grip level is a bit different; the surface here is rougher than COTA, but the basic geometry and layout is very similar. Based on the performance at COTA, we should have similar result here.

“I’ve had experience here in Skip Barber. It’s one of the best road courses in the US. We have such a great fan turnout and a beautiful part of the world. Everyone loves coming out here.

“You can tell you are in the land of cheese when you drive up here from Indianapolis.”

Because of the length of the course combined with the 55-lap distance, the strategy options are fairly limited between making it a three-stop race.

“It’s a tough one because it is such a long lap, it’s cut and dry from a fuel standpoint,” Rossi said. “The tires make a big difference. It’s more of what tires do you use? Do you use new Reds versus used Blacks? That makes this race potentially interesting. Firestone coming up with a big discrepancy between Reds and Blacks is what will ultimately make this an interesting race.”

Rossi enters the race second in the standings, 25 points behind Josef Newgarden, who starts fourth in a Chevrolet. Rossi has just one finish outside of the top 10 in nine races this season (22ndin the IndyCar Grand Prix at the Indianapolis Motor Speedway). He has four podiums (top three), seven top-five and eight top-10s. 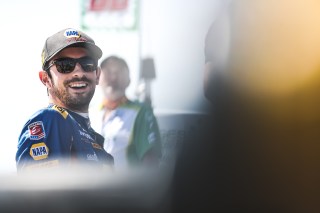 But it’s a streak of three second-place finishes in the last four races that has Rossi wondering if this is a great season or a lost opportunity?

“It’s frustrating,” Rossi told NBCSports.com. “It’s been for different reasons each time. I think the important thing is the pace has been there. You can be frustrated, but you don’t want to be upset with the fact of getting good results because it’s very easy for things to go poorly in a much bigger way.

“It’s not like we’re upset because we are 12thand not getting the results. We’re second and have been on the wrong side of some misfortune or bad timing but at the end of the day the car has been fast, so we have to take some comfort in that.

“Josef is a champion. He has already proven he can do it, and he’s an American. To me, there is a lot of professional pride in the fact I would like to beat him. But it’s an amazing thing for the series to have American guys at the top fighting for a championship.

“I love Scott Dixon and Will Power and Tony Kanaan, but it’s really cool to give U.S. fans American guys at the top fighting for championships.”