ELKHART LAKE, Wisconsin – With one of the fastest cars all weekend during the practice sessions for Sunday’s REV Group Grand Prix at Road America, NTT IndyCar Series driver Ryan Hunter-Reay believes he is primed for his first victory at the fabled road course.

The 2012 NTT IndyCar Series champion and 2014 Indianapolis 500 winning driver is confident he can finally break through with his first Road America win this weekend.

“It’s one of my favorites,” Hunter-Reay told NBC Sports.com. “This place is special to me. I grew up racing here in Skip Barber cars. I love coming here. It’s the heart of road racing in the United States. Last year, I finished second and ran second the whole day. It’s tough to close that gap, managing the tires, trying to put yourself in a position to make a charge in the last few laps.

“We just came up a bit short last year.” 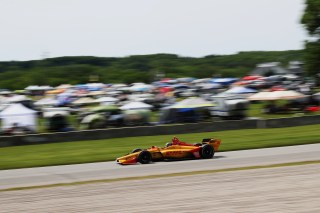 The natural terrain road course is considered “America’s National Park of Speed” because of its massive length, picturesque terrain and enthusiastic support from the fans who began camping out here earlier in the week.

It’s a very challenging track for the drivers that often favors the leader of the race. In fact, last year’s winner, Newgarden, led 53 of the 55 laps in the race.

Hunter-Reay, however, believes under the right circumstances, there can be passing for the lead.

“It has long straights, so there are opportunities to pass,” Hunter-Reay believes. “If you have a little bit of an advantage on the next guy in front, you can make a run for it. Last year, we were so evenly matched, I couldn’t stay close enough through the corners leading onto the long straights in order to make that pass. I had a few good runs on him, but not enough to make a definitive move.

“This place does lend itself to some good racing because of the long straights.”

Because of the length of the race course, and the race distance at 55 laps, it’s a very straightforward contest in terms of race strategy. Some drivers, such as Team Penske’s Will Power, would like to see a “no-return push-to-pass” system, meaning drivers would not be allowed to use the overtake assist capability of the car to defend.

Once a pursuing driver hit the “Push to Pass” the lead driver would not be able to negate the brief horsepower advantage by also hitting his “Push to Pass.”

Hunter-Reay doesn’t believe that is necessary. 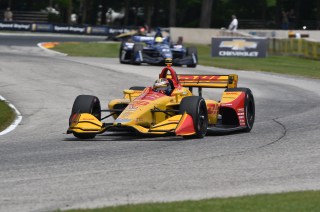 “You don’t want to look for artificial solutions,” Hunter-Reay said. “If you have three evenly matched cars, it’s going to be tough to make that pass for the lead because the lead car is just as fast as the car behind it, if not faster.

“I think the racing is pretty good here. Through the field last year, it was action-packed. There was quite a bit of passing down the long straights in the braking zones. I’m not sure what I would be reaching for there.

With eight races remaining, Hunter-Reay is seventh in the standings, 115 behind the leader, Newgarden. The time to make a move in the points is now.

“I’m not thrilled with the start of the season,” Hunter-Reay said. “We had a couple of podiums, but we need to get the wins going. I thought we had a great chance at it at Texas, but circumstances being as they were and the yellows as they fell, we had to make an extra stop for fuel and that sealed our fate.

“I thought we were going to get win No. 1 two weekends ago. We’ll have to redouble our efforts and go one better than last year.” 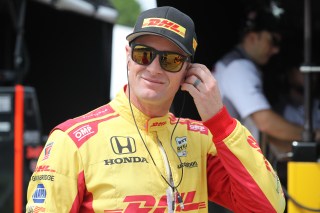 The 38-year-old veteran is still at the peak of his game and with 18 career wins including the 2014 Indianapolis 500, he is already an accomplished driver.

So, what continues to motivate Hunter-Reay?

“Just winning races and competing for a championship,” Hunter-Reay said. “The last few years at Indianapolis, we had a great shot at it. Winning a championship is high on that list. In 2012, when we won that championship, we were 20 points back going into the last race.

“I know we can get that done. We need a string of consistency to make that happen.

“There is not one weak link on this grid. To see it all gaining momentum, it’s the sport I love so it’s a great thing to see.”