ELKHART LAKE, Wisconsin – All Alexander Rossi needed to win Sunday’s REV Group Grand Prix at Road America was one pass in Turn 2 on the first lap of the race. He went on to defeat Will Power by 28.4391 seconds to win Sunday’s NTT IndyCar Series contest.

Scott Dixon’s task, however, was much more difficult.

He started 12thbut was tagged in the rear by Ryan Hunter-Reay in Turn 5, sending Dixon’s Honda in a spin and dropping him 10 seconds behind the field with 55 laps to go.

Undaunted, the five-time NTT IndyCar Series champion fought through the “Red Mist” of anger and adrenalin to race his way through the field and put on the real show of the race.

With Rossi checked out of the field and gone, leaving the remainder of his competitors in the Wisconsin woods, Dixon made up the gap, one car at a time. He would make 18 passes in a race that featured 191 passes throughout the field including 175 for position. 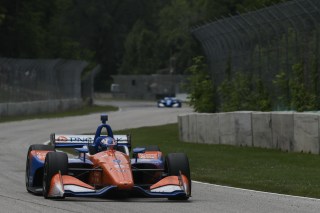 At the checkered flag, Dixon fended off a charge James Hinchcliffe to finish fifth – quite a recovery from spinning out and restarting in 23rd.

“It was frustrating, especially when you get turned around and we were almost 10 seconds behind the field at that point and had to catch up,” Dixon told a group of reporters, including NBC Sports.com, on pit lane after the race. “It’s racing, man. We had our problem in qualifying and puts in you in the middle of the pack. We got tapped from behind and it spun us around.

“We tried to make the best of the day, to be honest. Fifth place was pretty good. Luckily, we were at a track where you could use strategy and pass if you have a fast car.”

The 4.014-mile, 14-turn Road America permanent road course allows for fantastic racing throughout the field, although there was no competition at the front as Rossi led 54 of the 55 laps in the race. The only lap he did not lead came when Graham Rahal was credited with leading a lap after Rossi made one of his three pit stops.

Dixon’s latest adversity has put him in jeopardy of contending for the 2019 NTT IndyCar Series championship. Dixon is fourth in the standings, but is 94 points behind the leader, Josef Newgarden with seven races remaining.

“We are at a point in the season where we definitely need to make a run,” Dixon said. “When the two leaders are taking all the points, it makes it hard to close that gap. It’s frustrating when you look at the last three races. Detroit was my fault and getting caught up with Colton Herta at Texas and then today.

“It could have been a lot more points we would be sitting on right now. We’ll keep our head down.”

When Dixon spun out, his car was left facing the wrong way, that is what cost him the extra time to get the cars spun in the right direction. 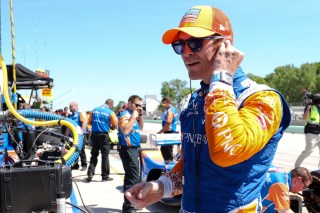 Dixon credits the “Red Mist” with the extra adrenaline he needed to race through the field.

“That sometimes helps, to be honest,” Dixon said. “You don’t think about anything else apart from trying to make up ground. The only positive side is it was Lap 1 and if it had been later in the race, it would have been much harder to recover from.

“That’s just the way it is, man. I got hit from behind. It was a center punch up the rear.”

To score a top-five finish was remarkable for Dixon, and he had to survive one more bit of contact at the end of the race involving James Hinchcliffe.

“It was just good, hard racing.

“We really have nothing to lose right now. We are 94 points back. It’s kind of a fun way to race. There’s always enough time to catch up in the points, so let’s see what happens in seven more races.”