He started on the outside of the front row, drafted behind pole sitter Colton Herta at the drop of the green flag, pulled out a perfectly timed move to race side by side with Herta going into Turn 1.

By Turn 2 of the first lap, Rossi’s No. 27 NAPA Honda was out front and drove away from the field, easily winning the REV Group Grand Prix of Road America by nearly 30 seconds over Team Penske’s Will Power.

Rossi was so good, it appeared he was running on a different race course than the other 23 competitors. There was some outstanding racing throughout the field with 191 total passes, including 175 for position, but none of those passes were at the front.

According to Rossi’s engineer, Jeremy Milles, there was just one thing kept Rossi’s race from being deemed complete perfection.

“It we had stayed out two laps longer on the last pit stop, we would have led every single lap instead of Graham Rahal leading one lap,” Milless told NBC Sports.com. “It’s good to see when we give him a proper car, he puts it to work. 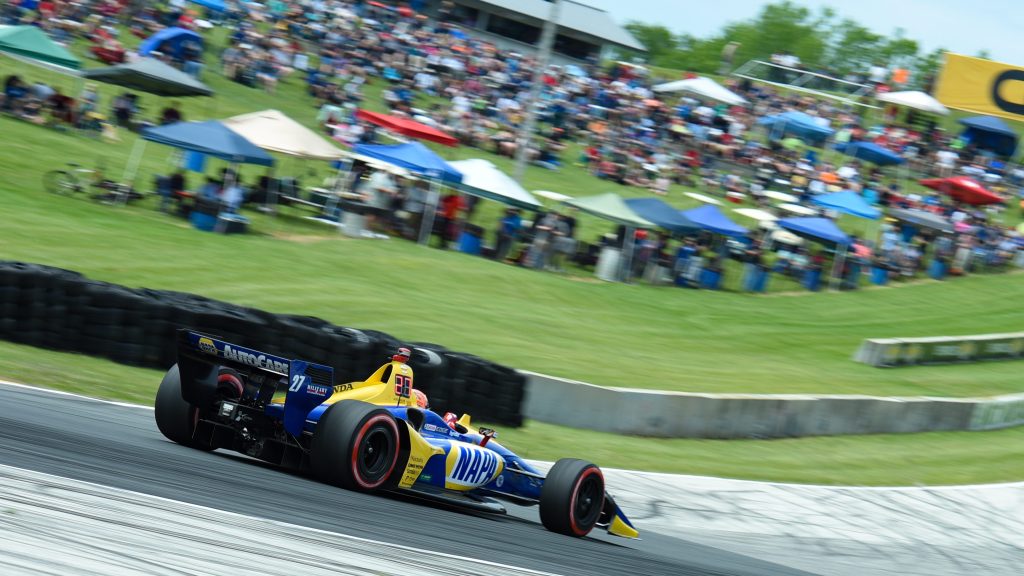 Rossi led 54 of the 55 laps in the race and defeated Power by 28.4391 seconds – a huge margin of victory by today’s standards. Back in 1982, Hector Rebaque defeated Al Unser by a full lap at the 4.014-mile, 14 Road America road course, but those were far different times than today’s very deep field in the NTT IndyCar Series.

Although it was Rossi’s second victory of the season and the seventh of his career, the 27-year-old from Nevada City, California, has been the driver everyone talks about in 2019. The win snapped a four-race streak where he finished second three times and fifth in the other.

Simon Pagenaud won the 103rdIndianapolis 500 on May 26, but the fans and media were talking about Rossi’s bold, daring moves, including some wildly aggressive passes down the front straight and to the outside in Turn 1.

Rossi had a fantastic car the next week in the first race of the Detroit Grand Prix at Belle Isle but was burned by the timing of a caution period for a crash as his main challenger, Josef Newgarden, dove into the pit area to make a stop just before pit lane closed because of the caution.

Rossi had to wait until the pits were reopened to make his stop, and that put him behind Newgarden and ultimately decided the race.

After a fifth-place finish the following day in Race No. 2, Rossi was once again standing up in his seat and on top of the steering wheel in a tremendous battle with Newgarden at Texas Motor Speedway on June 8. Rossi tried his best to make his car stick on the outside lane going into Turn 1, but when he discovered the risk was much higher than the reward, he had to begrudgingly settle for second, finishing 0.816 seconds behind the current NTT IndyCar Series points leader.

Rossi left no doubt on his Sunday drive through the Wisconsin woods as he never was challenged.

In just three short seasons, Rossi has developed into one of the greatest drivers in a generation in IndyCar. He doesn’t even have 10 victories yet, and he already had the makings of a legend.

“It’s almost like Juan Pablo Montoya, when he arrived as a rookie, he was great immediately,” Rossi’s team owner Michael Andretti told NBCSports.com after the race. “Juan is one of the greats, and I think as time moves on, Alex will prove to be one of the greats.

“He is very aggressive, very calm, very confident, everything you want in a driver. He wasn’t racing anybody all day; he was just racing himself not to make any mistakes.”

For Andretti, this is a very important time in his relationship with Rossi. The driver’s contract concludes at the end of this season, and he is the focal point of speculation on where he will race in 2020.

Before Pagenaud revived his career with a sweep of the major events at Indianapolis Motor Speedway during the Month of May, Rossi looked like “Penske Material” as the driver that would take over the No. 22 Chevrolet. After Pagenaud won the Indy 500, team owner Roger Penske assured him he would be back on the team in 2020.

Rossi’s loyalties lie with Honda. Both he and his father, Pieter, share a close relationship with the engine manufacturer that helped the former Formula One test driver at Manor find a full-time home in the NTT IndyCar Series.

Andretti told NBCSports.com on Friday that he was “optimistically confident” that he will re-sign Rossi once a sponsorship agreement with NAPA is completed. 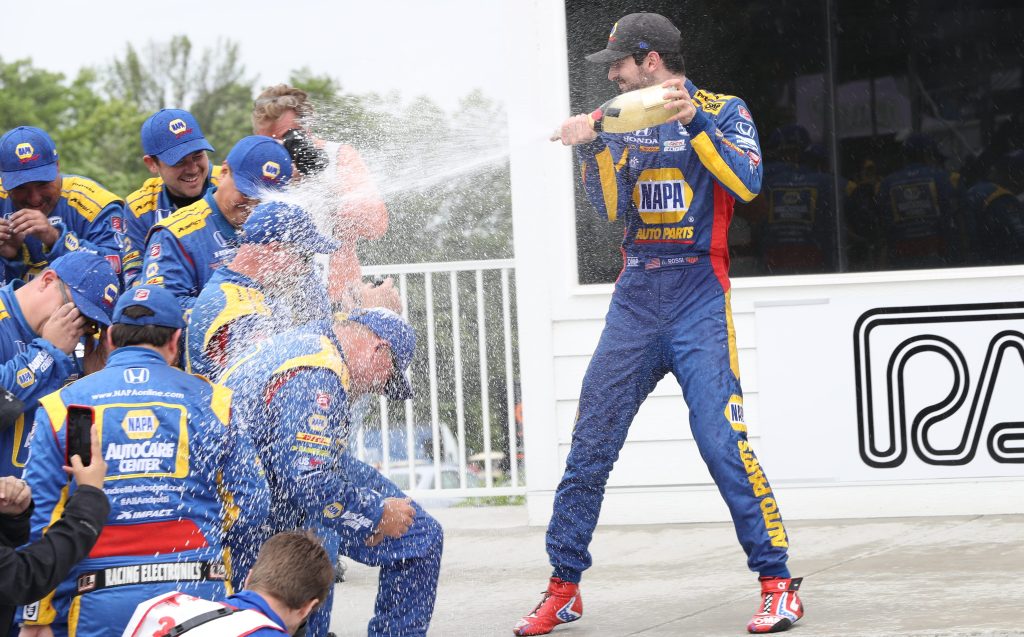 There are others, however, that aren’t as optimistic.

If Roger Penske wants a driver, who turns down an opportunity like that? After all, Team Penske is far and away the winningest team in IndyCar history, including a record 18 Indy 500 wins.

Think of these scenarios.

What if McLaren makes a substantial offer to align with Andretti Autosport for a full-time NTT IndyCar Series team in the future after McLaren’s debacle in this year’s Indy 500?

In order for that to happen, though, Andretti would have to switch to Chevrolet, because Honda ‘s parent company in Japan will no longer do business with McLaren.

The last time Andretti considered leaving Honda for Chevy, Rossi was set to leave Andretti to join another Honda team, Schmidt-Peterson Motorsports in 2017.

If Andretti Autosports and McLaren joined together, that would also mean the Andretti-aligned Harding Steinbrenner Racing would become a Chevy operation.

Honda could keep Rossi as one of its drivers by leading him to Chip Ganassi Racing. Five-time Cup Series champion Scott Dixon remains on top of his game, but it’s unlikely he will be racing Indy cars 10 years from now. 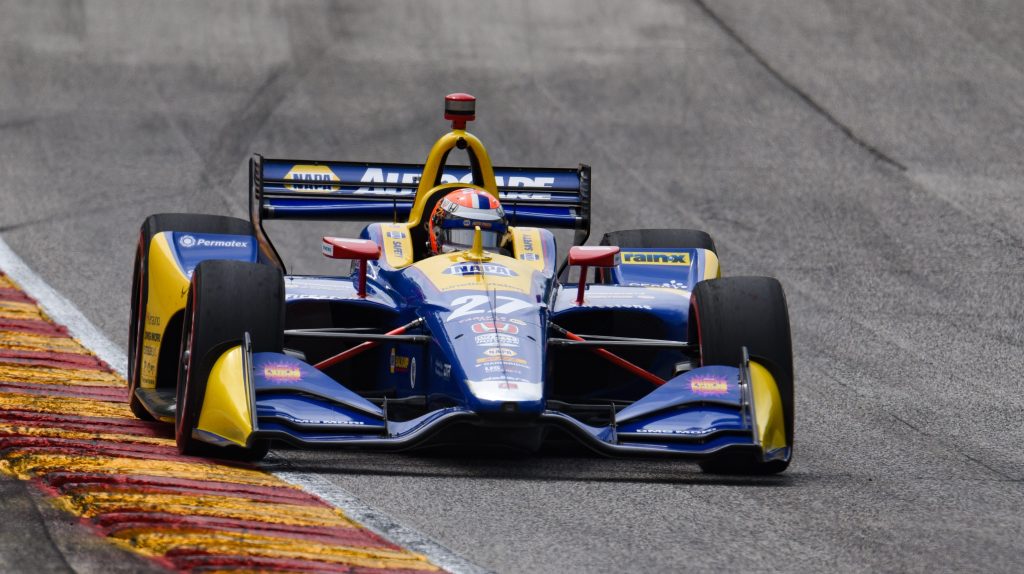 Barring unforeseen circumstance, Rossi will still be in the cockpit and winning races in a decade, and that would position Ganassi’s team for the future. The team’s second driver is rookie Felix Rosenqvist, who is currently racing with a one-year contract.

Even Rossi knows his situation for next year is complicated, which is why he chooses not to talk about it. He has developed a strong bond with Milless as his engineer and Rob Edwards (white shirt on left) as his race strategist.

Do both of those key members end up on a different team with Rossi? Edwards is a key member of management at Andretti Autosport as the Chief Operating Officer.

Rossi is as cerebral as he is aggressive. After his victory, when pressed upon his next contract, he concluded the conversation perfectly.

“I have no considerations,” Rossi said regarding his contract status. “It’s in God’s hands.”