Scott Dixon served as the test driver in INDYCAR’s simulation of the proposed Aeroscreen that will greatly enhance driver cockpit protection in the future. Dixon, a five-time NTT IndyCar Series champion and winner of 45 IndyCar races, tested a prototype manufactured by Roush Tuesday morning at the Dallara simulator in Speedway, Indiana.

The latest test comes just six weeks after INDYCAR announced a partnership with Red Bull Advance Technologies to design an Aeroscreen concept to protect drivers in the cockpit of their Indy car. 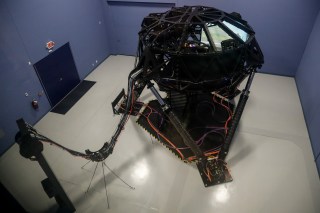 The simulator test allowed Dixon to provide feedback on entering and exiting the cockpit in addition to discuss the sight lines that will come from the framework of the Aeroscreen structure. The design of the Aeroscreen will enclose the cockpit but will be open on top. It consists of a ballistic Aeroscreen anchored by titanium framework.

Dixon’s test on Tuesday utilized the framework produced by Roush as the clear screen itself remains under development. The framework mounts in three areas around the cocking including the chassis centerline, two-rear side mounts and roll hoop integration – to provide enhanced load-bearing capabilities.

“It went pretty smoothly,” Dixon said on Tuesday. “This process has been ongoing, whether it’s the device we’re currently running to looking at the halo systems to the Aeroscreen to this partnership with PPG Aerospace and now Red Bull Technologies.

“It’s evolving. To actually have a piece we can use visually. The additions on this are some areas for cooling and the anti-fog system. We are just making sure the line of site isn’t impeded by any of these. It’s much like the current car with the AFP device. We are actually looking a bit higher out of the car.”

An additional vane has been added to the outside of the screen to help the tipping point of the car after it hits the wall.

Although it is not the full construction piece, it gave Dixon an idea of extraction from the car.

“The extraction doesn’t seem to be any different than the halo,” Dixon said. “That was pretty easy. Visually, there is always the worry about not being able to see the flag stands, but it was actually almost the same as the AFP that we are currently running.

“It didn’t really impede my vision.

“I think the next step is to run the proper one, which I think is down the road in September on track.” 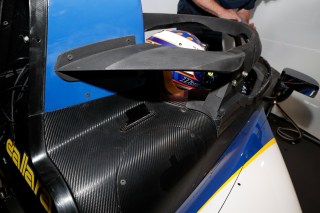 The Red Bull Advanced Technologies design will consist of a polycarbonate laminated screen that includes an anti-reflective coating on the interior of the screen, an anti-fogging device through an integral heating element and possibly tear-offs, all of which will be produced by integrated third-party companies. Another feature for the drivers will be a cockpit cooling option that will be designed by Dallara in conjunction with Red Bull Advanced Technologies.

The Aeroscreen is scheduled to be implemented for the 2020 NTT IndyCar Series season.

“The biggest concern, and it’s a bit of a myth about people talking about the halo and it not being useful for the Indy car because of line of site on the ovals,” Dixon said. “This design doesn’t impede that. What we have run in the past with the windscreen and how we run the angles and how it applies to the frame, there have been no issues previously. There will be an anti-fog system, as well, and that will help.

“Distortion and visual are the biggest things a driver looks at to make sure it doesn’t impede your vision or missing the flagstand. Those were all ticked off the list and there were no issues there.”

Dixon told NBC Sports.com the simulator was able to calculate the visual aspect of the actual clear Windscreen that will be mounted on the framework.

“I’m not sure which material they are going to go with, but there was no actual screen on there, but the additional pieces that will be added for the defog system was added,” Dixon said. “We’ll find out more about that on-track.

“I think it will visually be almost exactly the same as what we have. The AFP is pretty high, so it is exactly where the line of site currently is. The new system is the same in terms of thickness. Getting in the car is the only difference you will notice, but once you are belted in, visually, it will be about the same.” 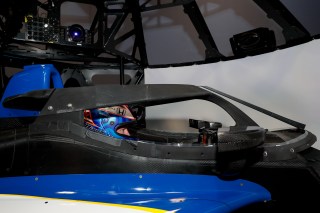 Aerodynamic figures and center of gravity tests were also simulated during the test because the weight distribution of the car will change. Dixon expects more aero drag with the screen.

He also said the test included running with wheels missing, as well as crash and roll scenarios.

“It was a pretty in-depth test,” Dixon said. “They want to cover most of the bases before we run a lot of tests in the off-season to make sure we have looked at all scenarios.”

Actual on-track testing will be next later this year. INDYCAR intends to have the Aeroscreen on all cars for the 2020 NTT IndyCar Series season.

The addition of the Aeroscreen should dramatically protect the driver, but it won’t change a racer’s attitude.

“This will protect the driver’s head a lot more, but the impacts are still going to be the same,” Dixon said. “We, as drivers, don’t really think about that.

“We think about going as fast as possible.”