TRYON, North Carolina – When the cover came off the life-sized clay sculpture of Simon Pagenaud’s head, it was so life-like, so real that the winner of the 103rd Indianapolis 500 described it as “disturbing.”

“It is certainly disturbing – a little shocking,” Pagenaud told NBC Sports.com. “Imagine seeing yourself on clay like that. You don’t really know until you see it. It’s like seeing two of you. It’s like you are looking at yourself. It’s not like on a photo.

“You see yourself on a photo and you think, ‘I look OK or I look bad.’

“This has expression. It’s almost like it is looking at you. It feels so real, that it’s disturbing. Obviously, I’m ecstatic. The representation seems to me like it’s perfect.

“Certainly, it’s a moment that will be engraved. It will be safe to say I won’t age anymore.”

The clay sculpture of Pagenaud’s head was at famed sculptor William Behrend’s studio nestled away in the foothills of the Blue Ridge Mountains in this picturesque community located just a few miles from the North Carolina-South Carolina state line.

Pagenaud, his fiancé, Hailey McDermott and their famed Jack Russell Terrier “Norman,” and Pagenaud’s father from France were part of an entourage that arrived at Behrend’s studio on June 26 – exactly one month after his thrilling victory over Alexander Rossi in the 103rd Indy 500 on May 26.

NBC Sports.com was invited to go along for the ride as Pagenaud sat in on a session where Behrend’s added final details to the “Clay Simon Pagenaud.”

Behrends has been sculpting the face on the Borg-Warner Trophy since Arie Luyendyk won the first of his two Indy 500s in 1990. It’s a long process that begins the day after the race with photos shot of the winning driver. From there, Behrends creates a life-size clay sculpture from the photos, but finer details are added when the Indy 500 winner makes it to his studio.

Once Behrends finishes the clay image, he creates a mold. From that point, the process continues until it is shrunken down to the size of an egg. The final bas relief sterling silver image is cast and then mounted onto the permanent Borg-Warner Trophy.

That is generally unveiled in early December, but this year’s process has been sped up to be ready by early August to help accommodate Pagenaud’s schedule. 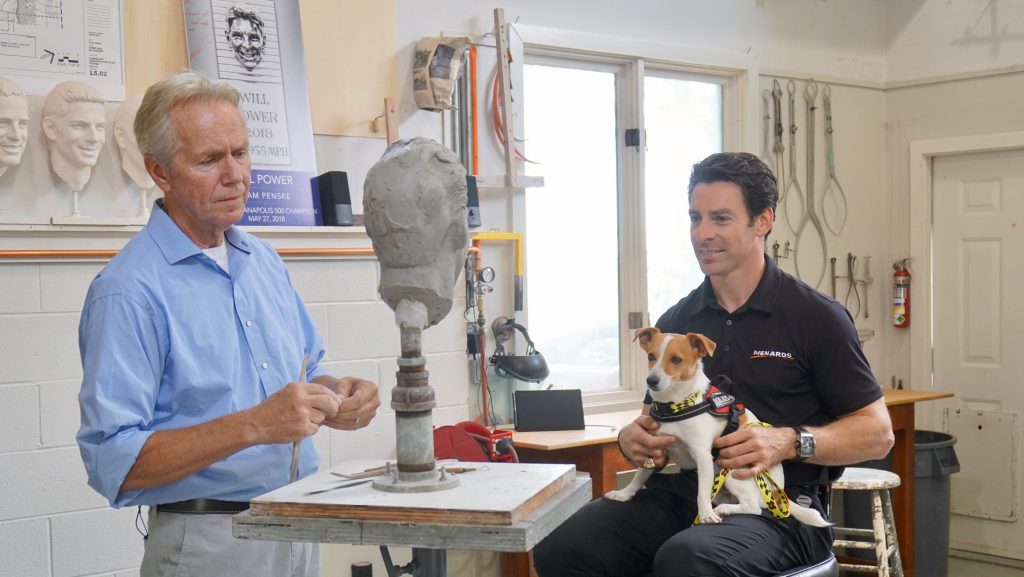 When Pagenaud arrived at Behrends’ studio, the clay head was under wraps. As Behrends slowly unwrapped the head, Pagenaud’s reaction was priceless.

“Here we go,” Pagenaud said. “There it is. Oh hey, ohhhh… Wow. Nice hair. Hair is very important to me. The nose is right, but I need my scar (above his left eyebrow that he received when he raced as an 8-year-old). That’s awesome. It’s like I’m getting a twin. It’s strange. It’s actually strange. It’s not like a picture, it’s like another one of you standing next of you.

“It’s so cool. It’s scary that you can be duplicated.”

“It’s amazing work,” Pagenaud said. “It looks just like me. At first, it’s shocking, almost disturbing, because it’s so real. On a photo, you don’t get to see the expression. It’s flattened. But here, it’s in three-dimension. Most people don’t get to see their face in three-dimension with all of the expression and emotion that was going on that day winning the biggest race in the world.

“I’m amazed that someone has that much talent. I’m sure it takes a lot of hard work to get to this point. It truly is an honor to be here.

“This is symbolic to us drivers. It’s the only race where you are privileged to get your face sculpted on this trophy. It’s amazing.”

Each one is about 9-1/2 feet tall on 5-foot high granite pedestals.

The face on the Borg-Warner Trophy is much smaller – so small that Behrends has to accentuate the expression of the driver because of its size.

“Simon has a perfect face and image for this type of work,” Behrends told NBC Sports.com. “It’s very distinctive with good lines and everything that a sculptor loves to see with a subject.

“Simon is one that is really a lot of fun. He’s got a great face. A lot of distinctive features. A great smile and a lot of fun to do.”

It was important to Pagenaud that Behrends included the scar that goes through his left eyebrow on the clay image. He received the scar when he was just 8-years-old.

According to the driver, it was a “life-changing moment” and helped him understand all aspects of racing.

“He mentioned that,” Behrends recalled. “I had seen the scar when I saw the photos, I was working from on the clay study. You can see the scar from his eyebrow on his left side. I didn’t know that was a scar. He pointed it out and I’m hoping I can include that in this small sterling image that will go on the Borg-Warner Trophy.”

“He has a very spontaneous and expressive face,” Behrends said. “He is a very friendly, and outgoing and warm person. I think that shows in his face.”

When Pagenaud described his feeling as “disturbing” after he saw the clay head looking back at him, did Behrends take that as a compliment or an insult? 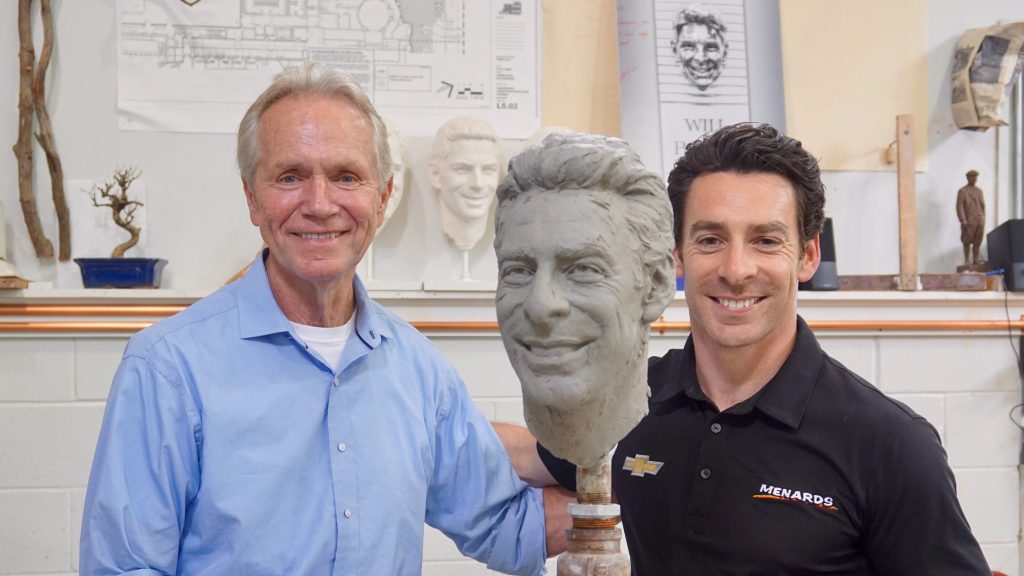 “I’ve heard that from other drivers when they have looked at this,” Behrends said. “I try to get it as accurate and lifelike as possible with the energy and the smile and their look. When you unveil that and see that yourself, not many people have that experience.

“True, it’s clay, but you are looking at an image of yourself looking back at you in three-dimensional. It’s not like looking back in the mirror.”

The Borg-Warner Trophy is one of the most famous trophies in all of sports. It has been part of the Indianapolis 500 Victory Lane ceremony since Louis Meyer won the second of his three Indianapolis 500 wins in 1936.

Pagenaud becomes the fourth driver from France to have his face on the Borg-Warner Trophy joining Jules Goux in 1913, Rene Thomas in 1914 and Gaston Chevrolet in 1920.

The Borg-Warner Trophy accompanied Pagenaud and Team Penske when they were honored at the White House by President Donald Trump on June 10.

“The trophy was right there with us and it was in the Oval Office with us,” Pagenaud recalled to NBC Sports.com “President Trump was very amazed by the trophy and he was very amazed by the race itself. He only had great words for the race. It’s the biggest race in the world, it’s an American race, and as the President of the United States he was very proud of it and amazed at the end.”

Pagenaud’s face will be mounted next to his Team Penske teammate Will Power, who won the Indy 500 in 2018, and below his favorite driver as a youngster, Canada’s Jacques Villeneuve.

The Indy 500 winner thanked Behrends for creating such a “disturbing” image of himself.

“He is immensely talented,” Pagenaud said of the sculptor. “It takes a lot of work. His fascination for faces and the details of faces is incredible. It’s like what we do in racing. It is incredible how much into perfection he wants to be. It’s very proud to meet him and get to know about what he does.

“He is an artist and I have the utmost respect for his talent.”