The 2020 AMA Monster Energy Supercross schedule has been released, featuring a new venue for the finale and a return to some favorite markets.

Replacing Sam Boyd Stadium in Las Vegas as the season-ender, Supercross will visit Rice-Eccles Stadium in Salt Lake City, Utah on May 2 for the 17th and final round. Las Vegas has hosted the final race for the past 23 seasons.

The season kicks off on January 4, 2020 at Angel Stadium in Anaheim, Calif. just as it did in 2019 when Justin Barcia bested the field in this year’s rain-soaked opener.

From there, the Supercross riders will head to the St. Louis, Mo. and the Dome at America’s Center before returning to the West Coast with their second visit of the season to Anaheim. That will be followed by stops in Glendale, Ariz., Oakland and San Diego.

St Louis (along with Tampa and Massachusetts) is one of three markets that return in 2020 as Supercross rotates their schedule.

“Our goal is the continued growth of the sport and rotating markets every couple of years, expanding Supercross Futures events and moving the finale to a new location helps keep the series fresh and exciting for the fans, as well as for the race teams and athletes,” said Todd Jendro, Vice President of Operations – Motorsports, Feld Entertainment in a press release. “Utah has become synonymous with elite, world class sporting events and we thought hosting the finale in Salt Lake City would be a fitting choice.”

The Supercross riders will cross the continent to Tampa, Fla. and Raymond James Stadium following the West Coast swing as that venue is another of the returning favorites.

Highlighting the schedule, Supercross will once again visit Broncos Stadium at Mile High for the second consecutive season. Eli Tomac thrilled the hometown fans with a victory there in 2019.

The remainder of the schedule highlights venues that hosted races in 2019, plus the return of Gillette Stadium in Foxborough, Mass – which replaces New Jersey’s Met Life Stadium as the annual Northeastern race.

The 2020 Supercross schedule remains one of the most grueling in professional sports with 17 venues in all four corners of the country being contested in 18 weeks.

“Monster Energy AMA Supercross, an FIM World Championship, is where the best riders in the world battle for the ‘number one’ plate,” said Jorge Viegas, FIM President. “It is a demanding and intense series of 17 events in just 18 weeks. Demanding for the riders and teams, yet exciting for the fans worldwide who cannot wait to see their heroes enter the stadium and challenge the track. Last season we saw the ‘outsider’ Cooper Webb win the Championship in style beating the likes of Tomac, (Marvin) Musquin, (Ken) Roczen and (Jason) Anderson. Only time will tell if he can do it again in 2020.” 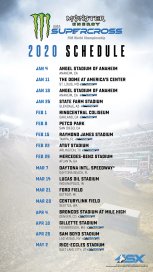