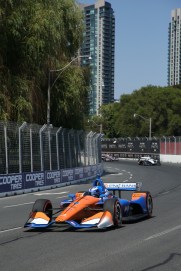 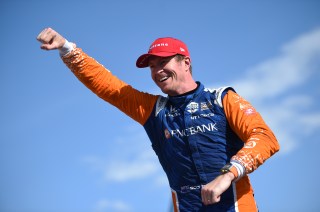 Though his Monster Energy AMA Supercross championship charge was put on hold, the novel coronavirus (COVID-19) pandemic had a silver lining for Eli Tomac.

Off the road while the season was postponed for nearly three months, the points leader was able to be present as his girlfriend, Jessica, gave birth to their daughter, Lev, on April 26

“A huge blessing for us there,” Tomac told host Mike Tirico during a “Lunch Talk Live” interview (click on the video above) in which he also joked about becoming a pro at busting off diaper changes. “That was one good blessing for us as we had our daughter on a Sunday, that would have been on a travel day coming back from the race in Las Vegas.

“That was probably the only positive out of all this mess was being able to be there for the birth.”

But there also could be more good fortune for Tomac as the series resumes Sunday at Salt Lake City, Utah (3-4 p.m. ET on NBCSN, 4-6 p.m. on NBC).

The final seven events will be held over 22 days in Rice-Eccles Stadium, which sits at just over 4,000 feet.

The elevation could favor Tomac, who was born and lives in Colorado and is accustomed to riding and training at altitude, which is a departure for many Supercross riders (many of whom hail from California and Florida).

“That’s going to be the test for us,” said the Kawasaki rider, who five of the first 10 races this season. “We’re at elevation in Salt Lake, so when you’re on a motorcycle, you have a little bit of a loss of power. That’s just what happens when you come up in elevation. And a lot of guys train at sea level, and we’re at 4,000 to 5,000 feet, so cardio-wise, we’ll be pushed to the limit.

“Most of our races are Saturday nights and back to back weeks, but this go around it’s Sunday and Wednesday, so recovery is going to be key.”

Supercross will race Sunday and Wednesday for the next three weeks, capping the season with the June 21 finale, which also will be shown on NBCSN from 3-4:30 p.m. ET and NBC from 4:30-6 p.m. ET.

Tomac, who holds a three-point lead over Ken Roczen (who also recently visited “Lunch Talk Live”), told Tirico he had been riding for 90 minutes Thursday morning on a track outside Salt Lake City.

“Most of us we can rely on our past riding pretty well,” Tomac said. “The question is if you can go the distance. That’s what a lot of guys have to train on is going the distance. We go 20 minutes plus a lap. That’s what you’ve got to keep sharp is your general muscles. Within two to three days, your brain starts warming up more if you take a few weeks off the motorcycle.”

Here is the schedule and TV information for the rest of the season: