TORONTO – James Hinchcliffe and Robert Wickens have been friends for years, dating back to their boyhood days when they were both competed in Karting in the Greater Toronto area.

Hinchcliffe is from the Toronto suburb of Oakville and Wickens grew up down Lake Ontario in Guelph.

When they weren’t racing, one of the highlights of the summer was the Honda Indy Toronto. It’s an event Hinchcliffe attended for the first time since he was 18months old in 1988 and has been at the race every year it has been contested (there was no race at Toronto in 2008).

Wickens raced at Toronto last year as an NTT IndyCar Series rookie. He is currently recovering from a spinal injury sustained in a wicked crash at Pocono Raceway on August 19, 2018.

Wickens has made significant progress in his recovery with hopes of one day returning to racing. Meantime, he remains a key member of “Team Canada.”

Wickens will return to the streets of Toronto this weekend as he drives a specially modified Acura NSX passenger car by Arrow so that the man who remains without full use of his legs can drive the car. Wickens will drive the car during the parade lap of the Sunday’s Honda Indy Toronto.

By watching Wickens make tremendous improvement in his recovery, Hinchcliffe admits it helps him keep his life in perspective.

Hinchcliffe, himself, has gone through some serious times of adversity, including a near-fatal crash at the Indianapolis Motor Speedway during practice for the Indianapolis 500 on May 18, 2015.

“It’s funny, people used to say that about me, I say that about him, and he says that about people he sees at rehab,” Hinchcliffe said. “It’s all relative. For me, Robby’s attitude towards this whole thing has been such a huge part of his rehabilitation, but also the people close to him coping with it. 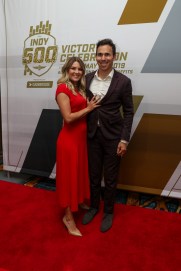 “There was a picture of him from the Indy 500 Banquet, Him and Karli standing on the Red Carpet. It took me a second to see him as standing. I don’t see him as sitting or standing, I see him as Robby. I’m happy we are at that point and I think he is comfortable at that point.

Wickens has attended several NTT IndyCar Series races this season, including the season-opener at St. Petersburg, Florida and the entire “Month of May” at the Indianapolis Motor Speedway.

Wickens will be at Toronto to help support the efforts of “Team Canada” in this big event for Canada’s largest city.

“Team Canada” is the nickname for Arrow Schmidt Peterson Motorsports because Hinchcliffe and Wickens are from the Toronto area and team co-owner Ric Peterson is from Calgary, Alberta.

“On track, if not off track, Robby is still a huge part of this team,” Hinchcliffe explained. “To have two Canadian drivers and a Canadian team owner, it’s pretty special. It’s a one in a million odds thing that we would both end up in the same organization. For us, there is an added passion to racing there, in our backyard, for Robby and myself and being in Canada for Ric Peterson.

“It’s important for all of us as the unofficial Team Canada to give the Canadians a good result to cheer for.”

Peterson and team co-owner Sam Schmidt have been extremely supportive of Wickens during his time of recovering. 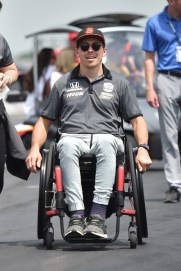 “We can’t say enough about how important Robert Wickens is to our team, even though he is not driving this season,” Peterson said. “I don’t think people know how much we really do miss Robert. He was very, very important to this team and he still is when he comes back. It’s very important because Robert is an inspiration to the whole team, but also a big help to Marcus and his first year in IndyCar. Robert has been a big help to him. We really like having him around.”

New to the team is former Formula One driver Marcus Ericsson of Sweden. He made 97 F1 starts before joining Arrow Schmidt Peterson for the 2019 season. A quick learner, Ericsson finished second to race winner Scott Dixon in the second race of the Chevrolet Detroit Grand Prix on June 2.

The 28-year-old Ericsson has earned “honorary status” as a member of “Team Canada” by the leader of the team, Hinchcliffe.

“Sweden is like the Canada of Europe – super nice people, they are OK with Winter, they like hockey, they use Snowshoes and they are good at recycling,” Hinchcliffe said. “It’s been great to have him on the team.”

Ericsson has fit in perfectly with the team. He is a former F1 driver who is willing to learn the much different form of racing in IndyCar. And, he is also learning the unique culture of Canada.

“We both love hockey, both countries do,” Ericsson said. “Fortunately for me we usually beat the Canadians.”

Hinchcliffe jumped in and said, “Blatantly not true. Anybody with a Google can tell you that’s a complete lie.

“He’s an honorary Canadian now, except when it comes to hockey,” Hinchcliffe said. “He’s not good enough for that.”