On Friday, he told NBC Sports.com that he felt “liberated” by the experience.

Wickens remains paralyzed from the waist down after a serious crash at Pocono Raceway on Aug. 19, 2018. He continues to recover from spinal injuries.

The Guelph, Ontario, native will take the next step in his rehabilitation by taking the modified Acura NSX on a parade lap before Sunday’s Honda Indy Toronto NTT IndyCar Series race. His fiancé, Karli Woods, will be by his side in the passenger seat.

“This was the longest I’ve not driven anything since I was 7 years old,” Wickens said in an introductory video shot after his initial drive on Thursday. “It definitely felt like freedom. It was something that finally felt familiar to me.

“Braking points, hitting an apex, bouncing over curbs; it all felt the same. It was fun to figure that stuff out, and I’m really excited to keep this project going and see where it takes us.

“This is just Phase One of many more phases to come.” 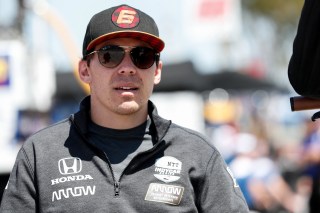 “I was able to get a couple practice laps in yesterday, and it put a huge smile on my face,” Wickens said. “Just to think how fortunate I am, one, to have such great partners around me to make this happen. Racing is my dream, it’s my passion, it’s all I want to do. And to have a company like Arrow to be so hands-on building the hand controls and then a company like Honda that somehow trusts me with a very expensive car is … I still don’t know why.

“But I actually bent a wheel already.”

“It’s been a big eye-opener for me, this whole injury,” Wickens said. “I have a whole new perspective on life, which I guess there’s good to take away from that, but the biggest thing for me is when I was in rehab every single day. It was the support that I had from my racing partners, from my family, from Karli, from all the fans, from everyone that kind of was getting me there to the gym the next day.

“When I was at rehab, I was just patient 31,265, and then you get to become friends with these patients and you hear their story, and then like I get back to my place at the end of the day and I kind of think like, ‘Man, I’m so lucky that I have such great support everywhere.’ If I’m having a bad day, just all my fans can just come and pick me up where everyone else can easily get into this big spiral and get into some depression and everything.” 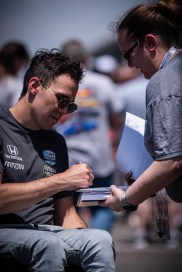 Phase One of the Arrow project is a kit that controls the throttle and acceleration with a ring on the steering wheel and software. The brake is a mechanical handbrake with the driver’s right hand.

There is no clutch. Wickens will shift using paddles on the steering wheel. Arrow has also updated brakes, tires, racing seatbelts, and the goal is to make the driver from the Toronto suburbs competitive again.

The entire experience, though, was liberating.

“I think the most liberating part was as soon as I got into the car, I got strapped in and like pushed the ring throttle for the first time, and the car started creeping away, and then I just like went full throttle just to kind of see what it would do,” Wickens said in response to a question from NBCSports.com. “Honestly, the car is so good that that was kind of a moment where I’m like, ‘Yeah, I miss that,’ and that was one of those situations. Because the thing is, once you’ve driven an IndyCar in anger for a while, it’s hard to get excited by a road car.

“But it works. It was one of those moments where I actually stayed full throttle for a while and then I kind of just coasted to kind of just take it all in and experience it all, and like I said before, just how grateful I am that Arrow could allow me to accelerate a car without using my legs was something pretty special.”

Physically, Wickens continues to make progress in regaining feeling in his lower body, but he is still confined to a wheelchair.

“In terms of new nerves firing, it’s funny, sometimes you don’t really notice, but something will be moving, and you’re like, ‘When did that start moving? I don’t remember that.’

“A couple months ago, I started gaining some feeling in my abdominal area, and I just kind of one time just itched my stomach and realized that I felt it, but I have no idea how long, if it was that day that I noticed it or it might have been there for weeks. 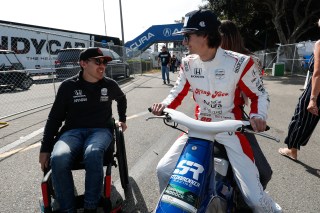 “Luckily I haven’t hit that plateau yet. I’m hoping I never will. And if it does, it’s years down the road because there’s people that defy odds. They always say that nerve regeneration is the first 24 months of a spinal cord injury, but then I know speaking to a lot of patients from Craig Hospital where I was rehabbing, the fact that people find their biggest gains four and five years afterwards because they finally start training really hard or they finally get stronger. Anything is possible with this injury. So, I think it’s not easy, but hopefully we can keep on keeping on.”

The next goal for Wickens is to dance at his wedding when he marries Woods later this year.

“Like I said in March, I’ll confidently say I’ll be able to stand there, and then jokingly like that wouldn’t have been much different than if I wasn’t injured in the first place,” Wickens said of his dancing ability. “Hopefully we can sway a little bit. She might have to take the lead, and I’ll just drag behind her.

“But we’ll figure something out.”