TORONTO – Alexander Rossi was asked directly by NBC Sports.com, if the recent five-race streak beginning with the Indianapolis 500 on May 26 is the best stretch of his career.

“Sure, you can say that,” Rossi told NBCSports.com as he prepared Saturday for Sunday’s Honda Indy Toronto.

Since he finished 22ndin the IndyCar Grand Prix at Indianapolis Motor Speedway on May 11, Rossi has been the central focus of the NTT IndyCar Series. 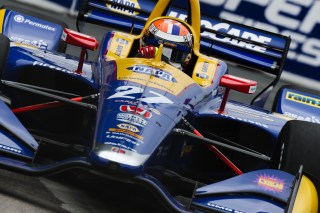 He finished second in an extremely aggressive drive in the 103rdIndianapolis 500 when he raced eventual winner Simon Pagenaud in an Indy 500 battle of the ages. He finished second the following race in the Chevrolet Detroit Grand Prix Race No. 1, losing the race when Josef Newgarden had perfect timing on a pit stop, hitting his pit box, just as a crash occurred, allowing him to leap-frog to the lead as the pits had closed and Rossi had yet to make his stop.

His fifth-place finish in the second Detroit Grand Prix race was his worst finish since the INDYCAR Grand Prix. The next week at Texas Motor Speedway, Rossi was involved in another high-speed duel, this time with Newgarden, who narrowly won the race over Rossi.

In the REV Group Grand Prix of Road America on June 23, Rossi’s greatness was on full display. He started second, took the lead in Turn 1 and drove away to win by nearly 30 seconds in one of the largest margins of victory in recent memory.

Throw out Rossi’s 22ndplace finish in the INDYCAR GP, every finish would be in the top 10 including two victories, including eight top-five finishes in nine races.

That is greatness personified.

“It’s the best results, I don’t know if you can’t put it all down to me,” Rossi said. “The team, in general, has not made any mistakes. We’ve been executing our race day. That was our biggest weakness in 2018. We had pace in 2018, but come Sundays, we didn’t put our best foot forward until the second half of the year.

Rossi’s string of second-place finishes that begin in the Indy 500, continued to the next race at Detroit and followed him to Texas left him frustrated when he arrived at Road America. By winning with such a large margin, Rossi slammed those frustrations into submission.

“We were coming up short a lot and when we had the opportunity to have a big race, we wanted to make a statement,” Rossi said. “We were able to do that.”

When the great Bobby Unser was racing, he was a hard charger who either won the race or his engine broke while he was running away from the pack. Unser used to say he may not have won the race, but everyone in attendance knew he was the fastest driver.

NBC’s Paul Tracy recalled when his father, Tony, told him, “If you don’t win the race, make sure you did something where people will talk about you afterward.” 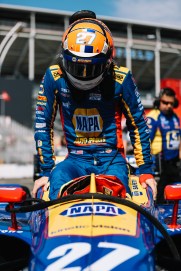 Rossi has been discussed and talked about more this year than probably any other driver in the NTT IndyCar Series, including the drivers who beat him while he was finishing second.

“Well, that’s good for me, but maybe not for them,” Rossi said. “The reason for that is guys would win races, but we were always the one on the podium and the topic of conversation. That’s a great thing.

“I have to agree with Paul that if you are not going to win, you may as well put on a show for everybody.”

Putting on a show has been Rossi’s ability his entire racing career. He believes he is a very competitive person with a sole focus of winning.

“People always say, ‘winning isn’t everything,’ but personally, for me, it is,” Rossi told NBCSports.com. “I demand the best from the people around me, and they expect the same from me.

“That’s just who I am as a person in general.”

Rossi has gotten substantially better with each season since he left Formula One and joined the NTT IndyCar Series in 2016. He stole the spotlight by winning the 100thIndianapolis 500 as a rookie. He was dramatically better his second season in 2017 and by 2018, he was ready to challenge and contend for the championship. 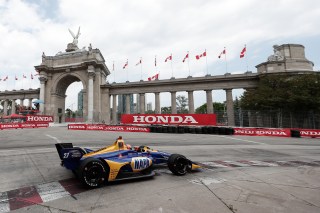 “This is a track where you have to be careful you don’t overdrive it, and I’m the type of person who drives 110 percent everywhere we go,” Rossi said. “It’s a track where I will have to adapt to it and maybe bring it down a notch.

“This place has always super tricky because of the pavement changes and the bumps.”

Rossi is in the final year of his contract with Andretti Autosport and has been the center of tremendous speculation whether he will remain with that team via a new contract, or potentially move to another team.

There are many possibilities in play, but why would Rossi want to change a good thing?

“No comment,” Rossi said about his future, only to say that he will have a new deal in place “by the end of the year.”

But he did admit that he admires the fact Scott Dixon has stayed with the same team since 2003 and has won five championships and all but one of his 45 career victories during that time.

That could serve as the model for Rossi’s future, because his No. 27 NAPA team at Andretti Autosport is arguably the best in the series right now. 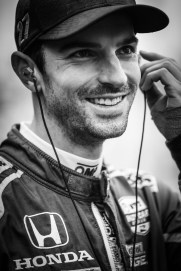 “I think what Scott has done in his career is unprecedented,” Rossi said. “I’ve always said continuity is a really good thing and something underrated in this sport. Having the relationships in this sport and building upon those is very good.

“We continue to get better on my team. To see what Scott has done on this team, he is the driver all of us want to emulate and beat because he is the benchmark. He is the best modern-day IndyCar driver.”

If Rossi continues to compete at such a high level and win championships and more races in his career, he may one day be part of that conversation.