TORONTO – Simon Pagenaud is back in the conversation for the 2019 NTT IndyCar Series championship after the driver from France scored an impressive victory in the Honda Indy Toronto on Bastille Day.

By winning the race from the pole and leading 80 laps in the 85-lap contest, this year’s Indianapolis 500 winner has put aside his celebration from winning the Memorial Day Weekend Classic and is ready to focus on another IndyCar title.

Since winning the 103rd Indianapolis 500, Pagenaud had some major commitments that came with winning the world’s biggest race, including a trip to France. Once Pagenaud returned to the track at Toronto, he concluded the time for celebration was over; it was time to focus on the championship.

“That’s a good point,” Pagenaud told NBC Sports.com. “I think that was definitely a closure to go to France and realize the impact of the biggest race in the world. I had no idea the impact it was going to have in France. It was quite incredible.

“We’re actually going back in August for a media tour with INDYCAR to celebrate with the media there and fans in my hometown as well, which I’m really excited about. (The) Borg-Warner (Trophy) is going to be there. Those are good moments, too.

“I’m definitely switched to championship mode now even though I’m a happy person.”

This weekend on the streets of Toronto, Pagenaud was the fastest in every practice session, won the pole on Saturday and easily won the 85-lap race on Sunday when he was in front for 80 laps.

He defeated Scott Dixon of Chip Ganassi Racing in a race that finished under yellow after Pagenaud’s teammate, Will Power, stuffed his No. 12 Chevrolet into the Turn 8 tire barrier.

“What a great weekend really,” Pagenaud said afterwards. “We were really hooked up the whole weekend with a fantastic race car.

“Then it’s Bastille Day in France. Being able to win for France, after winning Indianapolis, it’s been a special year. I’m very proud to fly the French flag here in a cousin country, which is Canada. I’m really excited and proud.

“I guess the French guy is leading the Tour de France today on the bike. I felt like I had to do the same. Super proud.”

Pagenaud’s near-perfect weekend also shows his resurgence in the 2019 NTT IndyCar Series points championship. It was his third win of the season, but his first since his spectacular “Month of May” in Indianapolis.

Pagenaud moved up to third in the standings and is now 39 points behind championship leader and teammate Josef Newgarden.

“What a great day for the team, great stops, great strategy and you had to hold off one of the best guys in the business behind you in Scott Dixon,” team owner Roger Penske said in Victory Lane of Pagenaud’s performance. 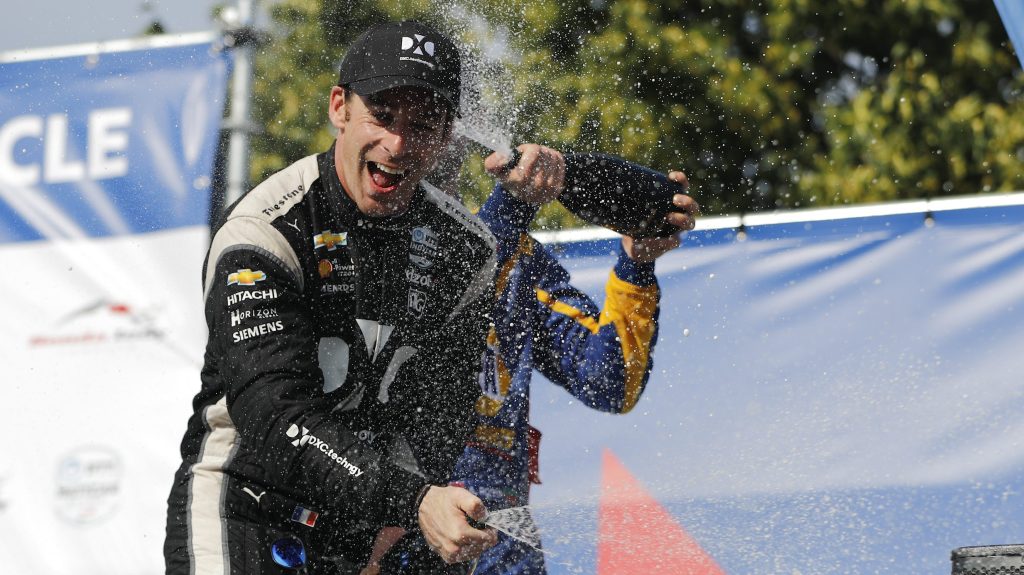 Dixon’s second place finish has him fourth in points, but he is 86 points behind Newgarden with six races left.

Alexander Rossi of Andretti Autosport finished third in a Honda and is now just four points behind Newgarden heading into Saturday night’s race at Iowa Speedway. He finished one position ahead of Newgarden, who clings to the championship lead that he has held for 10 of the 11 rounds in the championship.

While Rossi is closing in on Newgarden, Pagenaud is back to within striking distance of the lead. With six races remaining in the season, he promises to fight his way all the way to the final race of the season at WeatherTech Raceway in Laguna Seca, California on September 22.

“If you look at my Indy car career, I’ve been fighting for championships almost every year,” Pagenaud said. “Never count me out. That’s all I can say.

“Maybe here in the end, I’m showing it today, that’s my determination that’s talking, it’s not pretentious, it’s just that I have a great team behind me. We won the biggest race in the world. We just won an awesome race (in Toronto). To be at a driver track where you need to have a really good car, chassis and engine, we showed that today.

“We’ve got all the equipment, all the tools to do so well. Now it’s just a matter of knowing when to push it. It’s a long championship. You’ve got to build it. I’m here and I think Newgarden, Rossi and Dixon know it, like I know they’re here, too.

“It’s going to be a great fight in the end.”