NEWTON, Iowa – Santino Ferrucci gained a new fan in this year’s 103rd Indianapolis 500. It was NBC Sports Dale Earnhardt, Jr., one of the most popular figures in racing from his days as a NASCAR Monster Energy Cup Series.

Ferrucci, just 20 at the time of this year’s Indy 500 on NBC, had a fantastic race. He started 23rd and finished seventh. But it was one moment in the race that stood out to Earnhardt, who raved about Ferrucci during NBC’s telecast of the Indianapolis 500.

That came on Lap 177 when a multi-car crash was triggered by Sebastien Bourdais and Graham Rahal in Turn 3 that sent cars scrambling to avoid the mayhem.

Ferrucci drove through the grass to avoid the crash and was able to dodge the shrapnel to continue in the race.

Earnhardt was highly impressed with Ferrucci’s skill to make it through the crash and became a fan of the kid from Woodbury, Connecticut.

Mention that to Ferrucci, and the kid’s face brightens with a smile.

“Dale is not really from IndyCar, he’s a racer, though,” Ferrucci told NBC Sports.com. “He got to look at the way he does it and I got to look at NASCAR and it’s like when I got to know Tony Stewart, he’s got it and he’s got the heart for it.

“Having those words come from Dale Earnhardt, Jr. is meaningful. It really is.”

Ferrucci hopes to one day be on the “Dale Jr. Download” on NBCSN.

“I haven’t reached out to him personally, but I’ve reached out to via email to see if he wants to do something on the podcast,” Ferrucci admitted. “I think that would be pretty cool.

“He runs a pretty sweet show.” 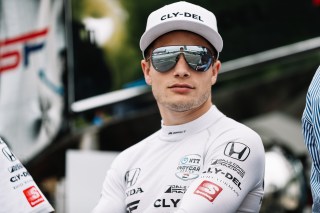 So far in his rookie season in the NTT IndyCar Series, Ferrucci is having a pretty sweet season with Dale Coyne Racing. He is 12thin the standings with four top-10 finishes and one fourth-place finish at Texas Motor Speedway on June 8.

Ferrucci finished 11thin Sunday’s Honda Indy Toronto and is ready for the challenge of his first short oval race of his career at Iowa Speedway Saturday night.

Ferrucci’s competitors in the NTT IndyCar Series are impressed with the young driver’s skill and talent. Even his rookie challengers are surprised that he is having one of the best seasons of any rookie in the series and is higher in the standings than rookie race winner Colton Herta.

Unfortunately for Ferrucci, he has an international group of detractors who won’t let him forget an unfortunate incident where is was ruled he purposely crashed his F2 teammate at Trident Racing Arjun Maini after the checkered flag of a race at Silverstone in July 2018.

According to reports of the incident, Ferrucci also refused to appear before the race stewards, despite being called upon to do so immediately following the incident. He was also reprimanded by series officials for holding his cell phone in the race car.

According to the official Formula 2 website, “the young American racer was found to be in contempt of violating the FIA’s sporting regulations, further earning him a €60,000 ($70,500) fine for the deliberate on-track action involving Maini. He was also taxed an additional €6,000 ($7,047.34) as he “violated both the technical and sporting regulations for incorrect driver safety equipment and the prohibition of wireless transmission devices within the car.”

The incident ultimately cost Ferrucci his ride. He already had a deal with IndyCar team owner Dale Coyne to help fill in for the injured Pietro Fittipaldi in 2018 to compete in four races. His best finish was 11thin the season-ending race at Sonoma after starting 20th. 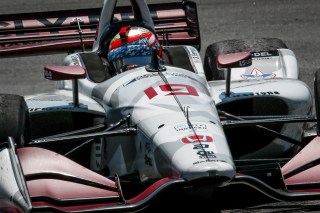 So far in 2019, Ferrucci has shown exemplary conduct both on and off the track. He has finished every race held so far this season and has not been involved in a single on-track incident.

Because of that, Ferrucci has a message for his vocal detractors who won’t let the NTT IndyCar Series rookie forget about the incident with Maini in F2.

“A lot of those people that write negative things about me on the internet have never met me,” Ferrucci told NBC Sports.com. “I’m so open to having people come down that don’t know me that have only read certain articles, I would love to meet those people and see if I could change their minds in person.

“It was an unfair judgement, but at the end of the day, you can’t make everybody happy.

“Like Jeff Gordon used to say, ‘If you have 100 people and 40 of them hate you, they are still talking about you.’

“You use that as fuel to the fire.”

In a deeply talented rookie class, there are races where Ferrucci has shined the brightest. His performance in the 103rdIndianapolis 500 earned him the Indy 500 Rookie of the Year Award against the likes of Colton Herta, Felix Rosenqvist and Marcus Ericsson.

“Mario Andretti put it best – you can only win that award once,” Ferrucci said. “We did a stellar job all month long. We were consistent and never put a foot wrong. We did the right thing all the way through with a stellar package. All I had to do was listen to the advice from the engineers and Sebastien Bourdais (his IndyCar teammate). I passed a lot of other drivers. Me and Ryan Hunter-Reay fought our way all the way up. We started 23rdor whatever and we ended the race six and seven. We passed all those cars to get up there.

“It was a fun challenge and I look forward to doing it again next year.”

One of his fellow rookies is a driver who knows Ferrucci quite well. That is Sweden’s Rosenqvist, who admits he is impressed with Ferrucci’s rookie season.

“Colton and I have been the fastest rookies, but Santino Ferrucci has been a big surprise and has had the more mature rookie season of all of us,” Rosenqvist said of the 21-year-old driver from Connecticut, who is 11thin the standings. “My goal this year is to get a win before the season is over. Colton has won a race and Marcus Ericsson has finished second.” 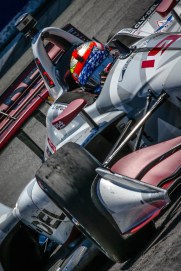 Ferrucci turned 21 on May 31 and realizes he still has much to learn. The next step in his learning experience will come Saturday night in the first short oval race of his career at Iowa Speedway in the Iowa 300.

“It’s not about setting your expectations too high,” Ferrucci said. “This year, every track is new to me. I know Portland and Mid-Ohio and that’s it. Going into the short ovals, I got to test at Iowa and that place is insane. I’m taking it a race at a time and not trying to take too much out of it and not trying to expect too much out of it and finishing all the laps that I can.”

Could the rookie driver with the colorful personality join Herta as rookie race winners in 2019?

“Our best opportunity will come in Portland because I know the track and we were fast there last year,” Ferrucci said. “But we have long races, and anything can happen.

“I would love to get on the top step of the podium, but I’m more concerned with the rookie race than a one-off win.

“I think that is more important at this stage of my career.”