NEWTON, Iowa – It’s not that Ryan Hunter-Reay is having a bad season, it’s that it has so far been “under the radar.”

The popular driver from Florida is usually involved in some fierce battles at the front of the NTT IndyCar Series. After his 16th-place finish in Sunday’s Honda Indy Toronto, he is seventh in the standings, 149 points behind the leader, Josef Newgarden with only six races remaining.

Luckily for Hunter-Reay, one of those contests is on one of his better race tracks – the .875-of-a-mile Iowa Speedway short oval.

Watch the Iowa 300 live on NBCSN on Saturday at 7 p.m. Eastern Time.

“We’ve got three wins there; hoping to make it four,” Hunter-Reay told NBC Sports.com. “I love that track. We’ve had a difficult time there lately. Hopefully, this team as a whole can get back to our winning ways there.

“Short oval racing is always very difficult, especially with the bumps at Iowa. It’s difficult to get the setup right and the teams have a lot of respect for that because of that reason.”

Iowa is the middle race of a very important three-straight weekends of racing in the NTT IndyCar Series. It began with last Sunday’s Honda Indy Toronto and concludes with the Honda Indy 200 at Mid-Ohio on July 28 before taking another break.

“Three-in-a-row, mid-season, can definitely turn the whole season around,” Hunter-Reay said. “We’re all thinking wins right now. Newgarden has the most wins right now, and we all have to fight that gap, plus the lead two drivers have to trip up as well.

“You have to come into the season ready to go and be ready week-in and week-out.”

Newgarden has a four-point lead over Andretti Autosport’s Alexander Rossi.

While those drivers are leading the battle, the other contenders in the championship such as Indy 500, INDYCAR GP and Toronto winner Simon Pagenaud, Scott Dixon and Will Power have to “win or else.”

To some race fans who say, “Isn’t that the point of racing – to win?” When an IndyCar driver says that, it means racing with bolder moves and strategy. 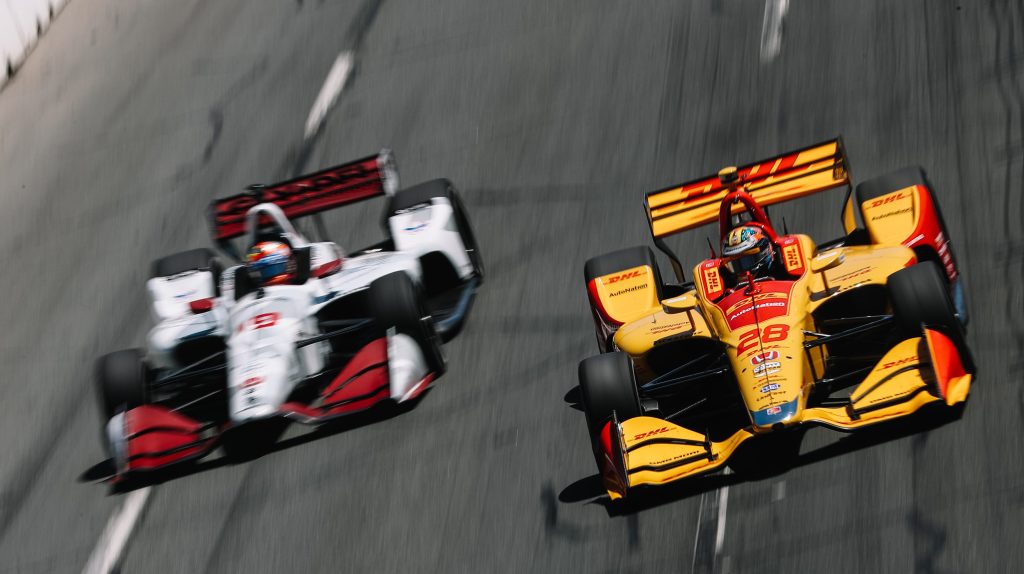 “We are taking more risks,” Hunter-Reay explained. “At this point, you are gambling more on strategy, you are taking moves you otherwise wouldn’t do if you were points racing.

Hunter-Reay continues to fight back from a season-opening 23rdat St. Petersburg when he dropped out of the race with mechanical issues. He also finished 17thin the INDYCAR Grand Prix at the Indianapolis Motor Speedway.

Other than that, his season has been solid with a third-place finish at Circuit of the Americas in March as his best finish of the season.

In June, Hunter-Reay had reasonable month including a fifth-place and fourth-place in the two races that make up the Chevrolet Detroit Grand Prix, a fifth at Texas Motor Speedway and an 11that Road America.

Since his Indy 500 win in 2014, some top drivers from America are challenging him for that title including 2017 NTT IndyCar Series champion Josef Newgarden of Hendersonville, Tennessee and the spectacular emergence of 100thIndianapolis 500 winning driver and weekly thrill-show star Alexander Rossi of Nevada City, California.

“We’ve been in the top-five quite a bit this year, we just have to break through,” Hunter-Reay said. “At Road America, we had a fast car all weekend, but qualifying went pear-shaped. We started 15th, fell back to 18th, then had to fight our way to try to get into the top-10.

“We have to start up front and finish up front.

“I need to get the job done behind the wheel.”