NEWTON, Iowa – Josef Newgarden had just qualified his No. 2 Chevrolet into the third starting position for Saturday night’s NTT IndyCar Series Iowa 300 and the Team Penske driver didn’t look happy. His main contender for the championship, Alexander Rossi of Andretti Autosport, qualified sixth fastest and he didn’t look happy, either.

Another reason both drivers may have been a tad sour was the pole winner was Simon Pagenaud, the hard-charging Frenchman who won this year’s 103rd Indianapolis 500, the INDYCAR Grand Prix and last Sunday’s Honda Indy Toronto.

Pagenaud is third in the standings, 39 points out of the lead.

Newgarden is usually one of the more ebullient and talkative drivers in the NTT IndyCar Series but after Friday’s qualifications, he was unusually short in his responses.

“I think our car will be all right, so I’m excited to go racing,” Newgarden said in a deadpan tone of voice to NBC Sports.com. “The top five is tight to me, so it (the championship) could be anyone’s game right now.”

Rossi was only slightly more descriptive of his car and chances in Saturday night’s 300-laps race at the 0.875-mile Iowa Speedway short oval. 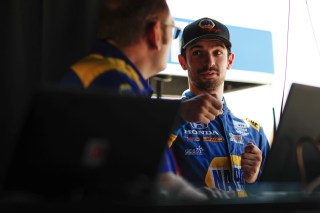 When asked what it was going to be like start from sixth place, Rossi’s response was blunt.

“(Crappy),” Rossi told NBC Sports.com “I don’t have anything that I’m super happy with right now and it’s going to be hotter tomorrow. We have to get our heads down and figure out how to get me more comfortable in the car.

Simon Pagenaud of Team Penske won the pole with a two-lap average of 180.073 miles per hour in a Chevrolet. He was followed by his two Team Penske teammates, Will Power (179.598 mph) and Newgarden (179.449 mph), both in Chevrolets.

Rossi was sixth with a two-lap average of 176.057 mph in a Honda, just behind fourth-place Takuma Sato’s Honda and James Hinchcliffe’s Honda.

Later in the post-qualifying press conference, Pagenaud continued his “less is more” approach to answering questions.

When told that the pole winner had never won at Iowa, Pagenaud responded, “I’m not big into stats, so…”

“Conditions were similar, so I don’t think it changed much,” Newgarden said. “I just obviously we didn’t nail it, so we got to nail it tomorrow.”