NEWTON, Iowa – Josef Newgarden’s convincing victory in a race that started Saturday night and ended Sunday morning has given the Team Penske driver a 29-point lead in the NTT IndyCar Series championship.

It was the latest local time start to an IndyCar Series race in history at 10:46 p.m. Central Time (11:46 Eastern) and it was by far the latest finish to a race in IndyCar’s very long history.

Alexander Rossi, who had closed to within four points of Newgarden’s lead in the championship after last week’s Honda Indy Toronto, finished sixth. Combine that with Newgarden’s win and Rossi’s deficit grew by 25 points.

“I’m much happier tonight, I can tell you that,” said Rossi, who was short and terse after qualifying third during Friday’s qualifications. “I was really a little bit frustrated yesterday just because I knew we had a pole-winning car and we didn’t put it together. It’s competitive.

“I’m very competitive, and I don’t always show it, but you want to do well every session, every practice, every qualifying. You want to be the best. If you don’t want that, then why are you here?

“I feel much better tonight. I really wanted us to win the race. I thought we had a good car to do that, a car capable, a team capable. I’m really pleased we were able to execute as well as we did tonight. We just did a good, solid job, car was perfect, pit stops, great strategy from Tim and the boys. We got another win here.”

Newgarden, the 2017 NTT IndyCar Series champion, led 245 laps in the 300-lap race. When Newgarden won at Iowa in 2016, he set and IndyCar Series record for leading the most laps in a race when he led 282.

Last year, Newgarden led 229 laps but faded at the end of the race when he was passed by eventual winner James Hinchcliffe. Newgarden’s Team Penske squad threw away a guaranteed podium finish by pitting under yellow with less than five laps left believing the race would be restarted for a final dash to the checkered flag.

But the race ended under yellow and Newgarden finished fourth.

“We redeemed ourselves from last year, too,” Newgarden said. “Last year I felt we had the car. It honestly fell apart with the 100 laps to go. Why did it fall apart last year and how do we make it right again?

“I think we achieved that tonight.”

It was Newgarden’s fourth win of the season and the 14thIndyCar win of his career. It’s the fourth year in the past five that Newgarden has led the most laps and he has led more than 100 laps in all four of those races.

The race was supposed to be an early evening start at 6 p.m. local time but a heavy rain storm with lightning delayed the race for over four hours, making it a true night race.

Little did many of the drivers realize it would end up being a morning finish.

“It was fun that we raced under the lights,” Newgarden said. “If the weather didn’t happen, it wasn’t really going to be a night race. It was actually kind of nice that the weather delayed it from that standpoint.

“Every other standpoint, it wasn’t a good thing. No one likes waiting around. We certainly don’t like making the fans wait. The ones that went home, completely understandable, got pretty late there. The ones that stuck with us, it was really nice they got to see a full show. I think we’re all pretty pumped about that.”

Last week at Toronto, Rossi finished third and Newgarden fourth and that narrowed Newgarden’s lead to just four points. Despite Rossi closing from behind, Newgarden did not feel pressure to perform at Iowa. 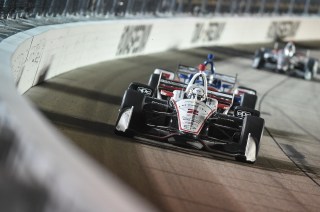 “Look, there’s a lot of people still in it. We just got to make the most of each weekend. If you got a winning car, we try to win. If we have a fourth-place car, try to finish fourth. That’s what we’ve been doing.

“You’re going to have those ups and downs. But it’s about who rides it out the most even, I think, we’ll see where we tally up at the end.”

Rossi knew he was in for a difficult time because Iowa Speedway has historically not been one of his better tracks. He started sixth and finished sixth to equal his best career finish at Iowa in 2016.

“Tonight, was a hit,” Rossi said. “We knew this was going to be a hard one for us and it was. We got as many points as we could and that kind of became the name of the game from there on. From where we knew we were yesterday; I think the team did a good job of maximizing what we had.

“This is one tracks where we are missing something to the competition.”

When it comes to racing at Iowa Speedway, however, it appears Newgarden has the competition covered. And that has given him some extra breathing room in the championship fight as the series heads to the Mid-Ohio Sports Car Course for the Honda Indy 200 at Mid-Ohio next Sunday.