STEAM CORNERS, Ohio – Expect significant progress to be made before this weekend’s Honda Indy 200 at Mid-Ohio on a future contract for Alexander Rossi, his father and agent Pieter Rossi told NBCSports.com.

Although Rossi’s father would not eliminate any team currently under consideration for the talented 27-year-old NTT IndyCar Series star, he listed the three most important criteria that he is considering.

“People, relationships and an environment where he can win races,” Rossi told NBCSports.com. “We expect to make significant progress before we get to Mid-Ohio.”

The elder Rossi didn’t want to eliminate any other teams because he owes it to his son to listen to what all interested parties have to offer.

But all signs point toward Rossi remaining with Andretti Autosport in a multiyear agreement currently being negotiated.

“I feel good about it,” team owner Michael Andretti told NBCSports.com. “The whole thing is we all want to be here together. Whenever everybody wants to work toward the same goal, that makes it easier.

NBCSports.com has also learned that Andretti Autosport is closing in on a multiyear renewal to remain with Honda Performance Development as its engine partner.

Team owner Michael Andretti was asked if he had reached an agreement with Honda.

“We’re getting there,” Andretti told NBCSports.com. “There are a lot of important pieces we need to complete. Three or four things have to get done at once, and we’re working on it. I want to get this done sooner.

When does Andretti hope to announce his deal with Honda?

“I hope to announce it soon,” Andretti said. “I’m not sure about dates yet. It feels good. It feels like we are in the right direction.”

Once Andretti and Rossi reach an agreement, the focus will shift to 19-year-old driver Colton Herta, who is currently with Harding Steinbrenner Racing. Although the team has a multiyear contract with the youngest driver to win an IndyCar Series race in history, that team remains short on funding.

Team co-owner George Michael Steinbrenner, IV and his stepfather, Sean Jones, indicated to NBCSports.com they do not have a deal in place for 2020 with team owner Mike Harding. They also indicated there are as many as six different scenarios that could determine next season.

Harding Steinbrenner Racing president Brian Barnhart said the team needs to find sponsorship and/or another investor in the team.

Andretti also has an interest in that operation, because the team uses Andretti Technologies as its competition partner. When Andretti aligned with Harding Steinbrenner at the end of last season, it was designed to be a team where Andretti Autosport talent from the “Road to Indy” ladder series could break into IndyCar.

“There are a lot of things going on right now that we can’t talk about, but I’m very much involved in that and monitoring it,” Andretti said. 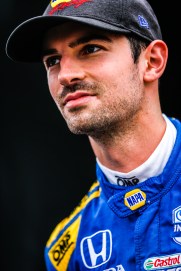 For Andretti, it’s important to keep both Rossi and Herta because the two drivers are generational talents.

Rossi’s emergence has been compared to Andretti when he was a driver and Juan Pablo Montoya.

“I would compare him more to Montoya than to me. He runs the car very neutral, and he’s not afraid to hang it out.”

Rossi, the driver, has remained steadfast in not discussing his future, leaving the negotiations up to his father.