It was at the Mid-Ohio Sports Car Course in July 2016 where it all began for Rosenqvist. At the time, Rosenqvist was a talented driver for Belardi Racing in the Indy Lights Series. Chip Ganassi Racing decided to give Rosenqvist a test in Dixon’s No. 9 Honda, utilizing an INDYCAR rule that gave team’s an extra test day provided an Indy Lights driver got to turn more laps in the test than the team’s full-time driver.

Chip Ganassi Racing was very interested in see what Rosenqvist had to offer that day and were quite impressed with his performance. At that time, Tony Kanaan was still under contract in the No. 10 Honda at CGR, so Rosenqvist would have to wait for a ride to open up on the NTT IndyCar Series grid.

Rosenqvist got another CGR test at Mid-Ohio in 2017 and was also impressive that day. But it wasn’t until the end of 2018 before the contracts aligned and Rosenqvist was able to finally get the No. 10 NTT DATA Honda for famed team owner Chip Ganassi.

On Sunday, he delivered by giving the team a 1-2 finish in the Honda Indy 200 at Mid-Ohio. Rosenqvist led 15 laps and nearly scored his first career IndyCar victory when teammate and leader Dixon’s Firestone Red tires began to lose their grip.

Dixon was able to hold on to a car that felt like he was “driving on ice” to score his sixth-career Mid-Ohio win and the 46thIndyCar win of his career.

He defeated Rosenqvist by just 0.0934-of-a-second in the third-closest finish on a road course in IndyCar history. 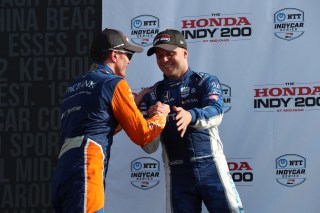 “Huge respect for Felix,” Dixon said afterwards. “He drove clean, and ultimately, it was going to be hard for any car to come past, even though we were about three seconds slower a lap than anyone else.

“Felix is a rookie here in IndyCar but has raced in many different series and has much broader knowledge of racing than I even do because he’s touched so many different kinds of formulas.

“Again, I keep saying it, but he’s a big talent. He’s going to win a lot of races. He was super-fast all weekend. I’m not sure why they switched to the three strategy unless he just wasn’t getting the fuel mileage. But they were darned fast in the race.”

At 27, Rosenqvist is also very smart. Although he gave it his best effort at trying to pass Dixon for the win, he wasn’t going to do anything stupid that would doom the team’s 1-2 finish.

“Well, it’s always playing with fire, when you see that orange car,” Rosenqvist said, referring to Dixon’s No. 9 PNC Bank Honda. “Chip’s first rule is always don’t take out your teammate or we’re going to have a serious discussion. He always says that before the race, and that’s going to stick in your head for sure when you’re catching up to Scott.

“I trust him to give the room when it’s needed and to be aggressive when it’s needed, and I didn’t really feel worried about it. I mean, when my team trusts me to go for it, I trust them that that’s the right call and I do what I’m told, go for it, have fun.”

The two drivers engaged in a wild last-lap battle in Turn 2, even banging wheels briefly, but it was good, hard, racing that kept both cars under control.

“I really want to credit (team owner) Chip (Ganassi) for letting us race,” Rosenqvist said. “The last lap, I think everyone really enjoyed that. We were enjoying it. We were banging wheels in Turn 2 there, was a bit exciting. But Scott (Dixon) is always going to fight you hard but fair, and I think I did the same, and maybe one more lap we could have got him. But yeah, it was awesome.

“I thought he was struggling both with fuel and especially tires, and he braked kind of early into (Turn) 2 and I thought he actually kind of let me go because he was going a lot slower at the time, and then he kind of veered in at the last moment and we hit a little bit.It kicked up a lot of dirt on my tires. I couldn’t really make the attack I wanted for the last couple of corners. But yeah, he’s clever and he’s never going to be easy to pass even when he’s running out of tires.

“The instruction was not to ‘take it easy and not pass Scott.’ They said, ‘try to get him, but think about he’s your teammate.’” 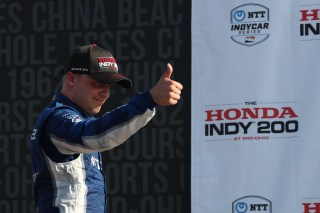 Rosenqvist had the obvious mixed emotions at coming so close to scoring his first career win. He had what he believed was the right tire strategy and the pace to win the race. But he also had one of the greatest drivers in IndyCar history to pass on a track where Dixon is the “Master of Mid-Ohio.”

Ultimately, Rosenqvist earned the respect of the paddock with his race and delivering his part on a 1-2 finish for Chip Ganassi Racing.

And it happened at the Mid-Ohio Sports Car Course, the track that started it all for Rosenqvist with his Ganassi IndyCar tests in 2016 and 2017.

“It’s always been a place I liked,” Rosenqvist said. “Inever actually raced here, but there’s always been a good flow for me at this track. Maybe it reminds me a bit more of the European tracks, kind of flowing, pretty smooth. It’s not as bumpy as most of the tracks we have here.

“It just keeps bringing me good memories here at Mid-Ohio. It’s an awesome place. It’s cool that everyone comes out to this race every year.”