When Robert Hight began working as a clutch specialist on John Force’s Funny Car in 1995, it was clear he had ambition and goals to achieve. He toiled in that role for eight years, earned his Funny Car driver’s license in 2004 and began racing full-time on the NHRA national circuit the following season.

And he never lost sight of that ambition and goals. He became president of John Force Racing and this past Sunday at Sonoma Raceway, north of San Francisco, became only the third driver in Funny Car history to earn 50 career wins (the others are John Force, with 149 wins, and Ron Capps with 62 Funny Car wins).

No. 50 couldn’t have come at a more special place for Hight.

“I’m amazed that we’ve racked up that many wins in 15 years,” Hight told NBC Sports. “It’s special to do it in Sonoma, where I attended my first NHRA national event and is the closest racetrack to where I grew up in Northern California (tiny Alturas, Ca.).

“Sonoma is really my home track. We came in there as defending champion and got it done again, and we did it from the No. 1 qualifying spot, which shows the domination we’ve had all year long actually.” 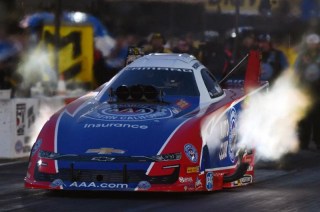 To further put Hight’s accomplishment in perspective, the two-time NHRA Funny Car champ is in a unique fraternity with Force and Capps.

“It’s amazing because if you look at the Funny Car racers of the past and who I think are the all-time greats, besides John Force, there’s Kenny Bernstein, Don Prudhomme, Raymond Beadle, Ed McCulloch,” Hight said. “When I grew up those were the guys I watched in Funny Car. Those guys were my heroes. And now to say I’m ahead of them all in wins is pretty amazing. You only dream of stuff like that.”

Only one other thing would have made Sunday’s win even sweeter, but it was not to be.

“Honestly, I thought it was going to come down to John and I in the final, but then he had a mechanical problem and couldn’t even make the run in the semifinals,” Hight said. “That would have been pretty exciting, to race him in the final. One of us shooting for 50 and the other shooting for 150 and being teammates. That would have been a lot of fun.”

Ironically, Hight hit win No. 50 before he even turned 50 years of age: he hits the mid-century mark on August 20. He sees how his boss – and father-in-law (Hight is married to Force’s oldest daughter, Adria) – continues to have a successful career at the age of 70.

When asked how many more wins he can earn in his own career, Hight remarked, “You look at John Force, he’s 20 years older than me and he’s still going strong. No one will ever catch John for wins in Funny Car. Capps and I are racing for second, basically.”

Hight has won five of the first 15 races this season in Funny Car, as well as recorded eight No. 1 qualifiers. He’s led the points since the season-opening race at Pomona, California. The two-time champion is bound and determined to avenge last year’s end result: he lost the championship to J.R. Todd on the final day of the season.

Otherwise, Hight would have a third championship. Coming so close to the title at the end of 2018 convinced Hight and his team to do something that is somewhat unusual in NHRA. Typically after every season, even the most successful teams start from scratch and rebuild for the next season.

That wasn’t the case with Hight and Co. They knew they had a strong car and a strong team. So instead of re-doing anything, they merely refocused and built upon the success of last season with that elusive third championship in their sites in 2019.

“We really did a lot of hard work over the winter,” Hight said. “We won the championship in 2017, went down to the last day in 2018 for a chance to win it, didn’t get it done and (crew chief) Jimmy Prock and (assistant crew chief) Chris Cunningham, the whole team, a lot of times over the winter you work on new things to go quicker and faster.

“We didn’t do that this year. We worked on consistency and looked real hard why we didn’t get that championship last year. That’s what we worked on, to get more consistent.

“You take every run you make, especially the ones where you don’t make it down the track, smoke the tires or lose traction, and you start working on the areas to improve it. By doing that, you’re increasing your odds, and it really has paid off. 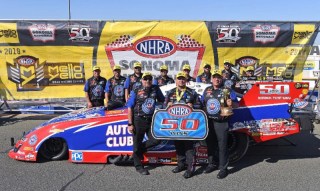 While the record books will indicate Hight has won 50 races, he doesn’t look at it that way. Rather, his team has 50 wins.

“It’s the team around me, that’s what I love most about a win, it’s not what I do in the car,” Hight said. “I used to be a mechanic, used to work on the cars and I know how hard each individual works. It’s really fun to go out and get a win as a team because this is a team sport. It’s not like golf, where you make a bad shot, it only affects you. That’s what really keeps me going.”

Hight goes for his sixth win of the season in this weekend’s NHRA Northwest Nationals in suburban Seattle, the third and final race of the annual Western Swing. Given the success he’s had this season, along with three races remaining until the six-race Countdown to the Championship playoffs, Hight feels he’s peaking at the right time.

“Jimmy Prock always says when you go out on the Western Swing, that’s when you really need to have your combination ironed out and worked out,” Hight said. “You don’t need to be testing and trying new things or fighting problems this time of year. This is where you really hone in on a combination and for better or worse, you stay with it.

“The Funny Car class is the hardest class to win in and it’s the most competitive. To have five wins shows these guys have done their homework and we are more consistent. Most of the races, we’ve been top speed and low ET. We have eight No. 1 qualifiers so far (in the first 15 races).

“Really working on the consistency and the areas where we needed to improve, I think that’s paid off. I don’t think we’re necessarily quicker or faster than we were last year, but just more consistent. And that’s how you win drag races.”