Don’t count out five-time NTT IndyCar Series champion Scott Dixon in this year’s battle for the championship. By winning last Sunday’s Honda Indy 200 at Mid-Ohio for a record-extending sixth time in his career, Dixon chopped 36 points off his deficit to points leader Josef Newgarden, who spun off course on the final lap.

That puts Dixon 62 points out with four races to go, including the final race that pays double points at WeatherTech Raceway at Laguna Seca on September 22.

Dixon is fourth in points heading into the two-weekend break before racing resumes in the August 18 ABC Supply 500 at Pocono Raceway.

Does last Sunday’s win at Mid-Ohio elevate Dixon to “Dark Horse” status in the 2019 championship race?

“Yes, big-time,” Dixon told NBC Sports.com. “We know with the last four races to go; it’s going to be pretty tough. Penske is strong and Alexander Rossi has been tough as well. We’ll keep our heads down and try to make the most of it.

“It shifts it up a bit. We started the weekend 98 points back and now we are only 62 points back. Those are the weekends that you need. You don’t wish that on your competitors, but it sounds like he got caught up with Ryan Hunter-Reay on an awkward part of the track and it cost him 10 spots or so. We know Josef is a huge competitor and will bounce back strong.” 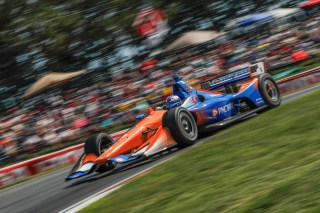 But, with three top drivers ahead of him including Team Penske’s Newgarden, sensational Andretti Autosport star Alexander Rossi and reigning Indianapolis 500 winning driver Simon Pagenaud of Team Penske, is it “doable” that Dixon can leapfrog all three drivers up and make up the 62-point deficit?

“Yeah, because it’s double points for the last one,” Dixon said. “Anything is possible, man. We’ve just got to keep our head down. We can’t start thinking about that right now, and if you win races, that will take care of it.”

That is exactly the mindset Dixon was in when he told NBC Sports.com that he was taking a “win or else” attitude into the Honda Indy Toronto on July 9. At that time, he was 106 points behind Newgarden.

Since that time, Dixon has been on a tear.

He finished second in Toronto, second the following weekend in the Iowa 300 at Iowa Speedway and won last Sunday’s Honda Indy 200 at Mid-Ohio.

Newgarden finished fourth at Toronto, won at Iowa and made a crucial last-lap mistake at Mid-Ohio when he tried to pass Hunter-Reay for third place on the final lap.

The two drivers banged wheels and Newgarden was knocked into the gravel pit and stalled his engine. Instead of finishing fourth, he finished 14th. Combine that with Dixon’s victory and it dramatically tightened the points race.

“That’s a big shift,” Dixon said. “Those are the weekends you need. We always go on about that 100-point mark, but when you come to the last race if you’re that far back it’s going to be impossible.

“You’ve got to take it. You don’t wish that on anybody. Talking to Ryan, who I guess that altercation was with, he really didn’t know what Josef was trying to do. I’m kind of a bit surprised to be honest, especially in the situation that he’s had, but it happens. It happens to the best of us. We make these mistakes, and the unfortunate part with Josef, I think that’s going to wind him up even more and he’s going to be super strong come Pocono.

“Either way, I think he’s going to be the person to beat. That team is super strong right now, and we’re going to have to work hard.”

Each of the next three races has the normal points structure which includes 50 points to win, one bonus point for the pole and one bonus point for leading the most laps. The final race of the season pays double, meaning the winner gets 100 points instead of 50.

By scoring his sixth win at Mid-Ohio, Dixon re-established himself as “The King of Mid-Ohio.” He must maintain that regal status at Pocono, Gateway, Portland and Laguna-Seca to claim a sixth NTT IndyCar Series championship. 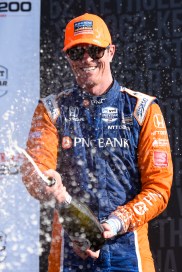 Dixon reclaimed his throne at Mid-Ohio and is “The King” once again.

“You can only feel like ‘The King’ when you’ve won and it had been quite a while since we had won at Mid-Ohio,” Dixon said. “The sixth win, it feels really good, just for the sheer fact that we hadn’t won here since 2014. We’ve won a lot here as a team, but it’s been a while since we’ve won.

“There’s always races that you can analyze and maybe work out a little bit different. But today was a good hard race, and man, we really worked for it.

“What is more shocking is up starting sixth and eighth in the field at a track where you can’t pass. It was super exciting today and a crazy finish with Felix racing us hard at the end.”

“It’s hard when you go into a one-lap shootout when you bring a knife to a gun show,” Dixon said. “It was really, really tough.

It’s Dixon’s ability to compete in “super hard racing” that has brought him back into the thick of a championship battle. When it comes to winning championships, nobody in today’s NTT IndyCar Series knows how to do that better than Dixon.